Gaels turn on the style in second half to overwhelm Drumkeerin 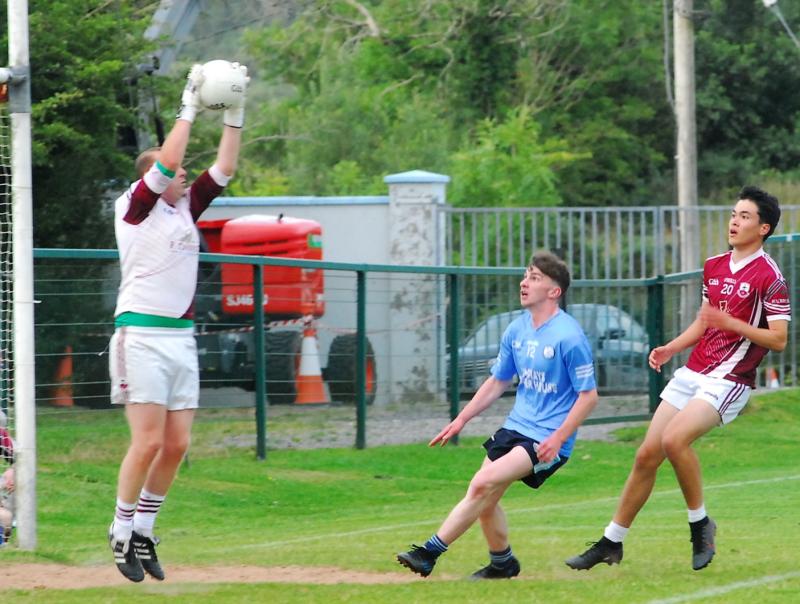 Games can change in an instant and the course of Friday's Smith Monumentals Intermediate Championship clash in Shane McGettigan Park changed utterly seconds before halftime when Allen Gaels Ciaran Walsh blasted the ball to the Drumkeerin net, setting the home side on their way to a comprehensive victory.

At the time of Walsh's goal, Drumkeerin defied their Division 3 status as they led the home side, relegated last year from the Senior grade and playing in Division 2, by three points as they looked more than capable of pulling off a shock. However, Walsh's goal let the air out of Drumkeerin's balloon as the second half turned into one-way traffic.

Gaels fans bask in sunshine and comprehensive win over Drumkeerin

With Shane Walsh adding a second goal for the Gaels nine minutes into the second half, it killed whatever tension there was in the game. With Drumkeerin low on numbers and suffering a few injuries, you could see the Allen Gaels players grow more confident as they moved the ball quickly and effectively and defended with ease.

The introduction of Brian Mulvey four minutes into the second half made a difference but the big change came at midfield where the youthful pairing of Jake Tobin and Radek Oberwan took complete control while the Gaels defence feasted on poor deliveries into the Drumkeerin defence, never really looking in any danger.

The game opened with Allen Gaels registering two wides before Daniel Maguire set up Francie Davitt for Drumkeerin's and the game opening score two minutes in. Davitt dropped a short short before an off-the-ball foul spotted by the excellent Martin Feeney allowed Colin Moran to fire over a fifth minute free.

Drumkeerin were creating chances but saw three go abegging before Radek Oberwan surged forward to point on 11 minutes to take the lead. Oberwan's point was a simple and effective play but it was matched two minutes later when Colm Clarke drove into space and drove the ball over the Gaels crossbar.

Daniel Maguire put Drumkeerin back in front when he finished a long run from the halfway line with a fine point from a tight angle and Tommy Rogan did the same, receiving a quick free in space and driving forward, breaking a tackle to score.

Drumkeerin were on top and really should have gone a goal in front when they intercepted a poor kickout but Cathal McCauley drove his shot high and wide with only keeper Ronan Moran to beat. There was also a goal chance at the other end when Caleb Duffy cut in but saw his shot well saved by Kevie Forde in the Drumkeerin goal, his defence clearing the danger.

Duffy wouldn't be denied as he rode a tackle a minute later to score a fine point and the Gaels were level when Ciaran Walsh gathered and turned to fire over the bar on 19 minutes. Drumkeerin hit back immediately with Davitt firing over a monster point before the midfielder delivered a long free into McCauley who made a great catch under pressure before firing over.

Allen Gaels almost had a goal but Shane Beirne's shot drifted across the face of the Drumkeerin goal to go wide and when Davitt converted a free after a foul on Micheal Lavin, the north Leitrim side led 0-7 to 0-4  and looked to be the team in control. That changed in an instant when Ciaran Walsh held off several challenges on a powerful run to blast the ball to the net.

A Colm Moran free after a foul on Duffy gave Allen Gaels a 1-5 to 0-7 halftime lead and they quickly extended the lead with Ciaran Walsh pointing within 20 seconds of the throw-in. Walsh quickly added another from a mark and suddenly it was now Drumkeerin who were three points adrift, their cause not helped by three bad wides.

Walsh went looking for a second goal but Drumkeerin sub Enda Lowe made a superb block on his shot only for the Gaels player to fire over from the rebound. Colm Clarke took matters into his own hands to surge upfield and fire over the bar nine minutes in but from the kickout, the Gaels worked the ball in a superb move that ended with a pass to an unmarked Shane Walsh for a killer goal.

Ciaran Walsh added two more points as Drumkeerin heads understandably dropped and Caleb Duffy got in on the scoring act 15 minutes into the second half. Francie Davitt popped over a free after a foul on Jamie Langan but Colm Moran immediately replied with a point for the home side.

Colm Moran, Caleb Duffy and Brian Mulvey would all add points before the final whistle with an injury time free from Davitt the only consolation for an outgunned Drumkeerin.