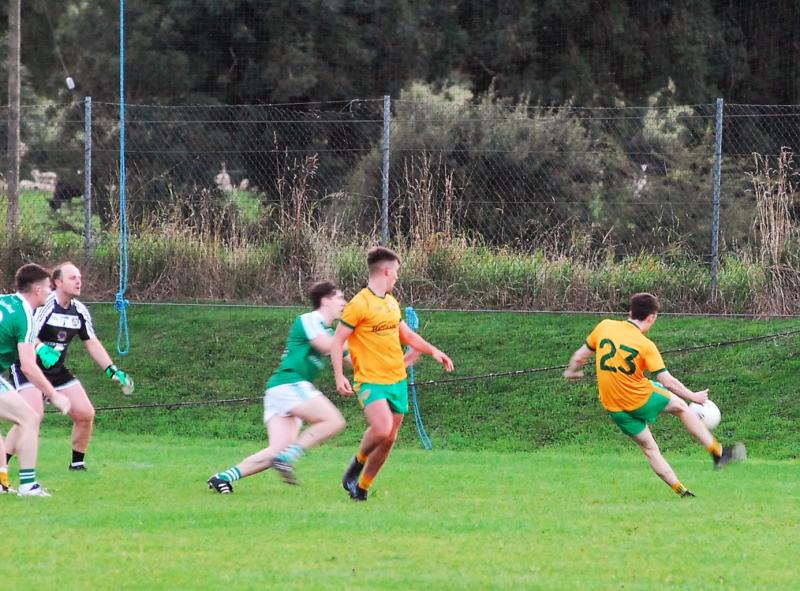 Champions Ballinamore Sean O'Heslins displayed all of their battling spirit on Friday evening as they defied a crippling injury list to snatch a one point victory over great rivals Mohill deep into added time of added time in Pairc Sheain Ui Eslin.

Optimism was in short supply before a ball was even thrown-in among the home fans as they started without injured duo Matthew Murphy and Eoghan Shanley and were also without Wayne McKeon and Senan Harte, a situation made even more calamitous when they lost both Dean McGovern and his replacement Shane Murphy to injury.

Yet even with all that against them, Ballinamore rediscovered the fire that served them so well last year and despite seeing Mohill draw level in the last minute of three minutes added time, they reaped the reward when Paul Moran forced a fumble from a high ball and Tom Prior fired over from an incredibly tight angle to win the contest.

With both teams having just one win under their belt, this was an enormous result for the champions who, just six days earlier, were on the other side of this scenario, St Mary's scoring a winner in added time of added time after O'Heslins had scored two late points to seemingly force a draw.

This time, it was the visitors who hit two late points from Shane Quinn and Fiachra McGuinness but the home side inflicted the deepest cut on a shell shocked Mohill who now have two losses from their three outings and need a win in their final round to book a place in the quarter-finals.

For Mohill, this is a hard one to figure where it went wrong as their talisman Keith Beirne was held in check by a Ballinamore defence where Oisin McCaffrey and Keelan McHugh were outstanding. Yet Mohill will find it hard to avoid the feeling that this was one they let slip from their grasp as the usually metronomic Beirne missed three frees and left another one short.

Their loss was not down to Beirne's misses, the Leitrim star again carried the battle to Ballinamore, but without his usual contribution, Mohill's scoring rate wasn't enough to halt Ballinamore's charge and it leaves them in a perilous position ahead of the final round of games.

For Ballinamore, their victory was marred by a serious looking injury to captain Dean McGovern who had to be stretchered from the field in the first half but they dug in and played with an intensity that was lacking in their loss to St Mary's and although the victory came at a high cost, they will be feeling much better about themselves this evening.

Ballinamore got off to a blistering start with Niall McGovern and Tom Prior converting frees before Liam Ferguson won a wayward Mohill kickout and charged forward to set up Mark McGrory for an easy point inside three minutes.

The mummers of astonishment that greeted Keith Beirne kicking wide two frees and one from play was amplified when Luke Murphy gathered a kickout and fed Paul Moran for a fine point. But any worries Mohill fans seemed to have were sated almost instantly when Shane Quinn's long delivery was brilliantly taken down by Jordan Reynolds, the Leitrim star firing to the net on ten minutes.

Now Ballinamore hit a few wides and good work from the two Keiths, Keegan and Beirne, set up Domhnaill Flynn for a fisted point. Then followed a long delay when Dean McGovern went down heavily after making a high catch and had to be carted off with Shane Murphy replacing him and the sub almost had an instant impact but saw his shot come off the post.

Keith Beirne edged Mohill in front with a point but Niall McGovern replied with two frees to put the home side back in front. The tit for tat continued with Beirne claiming a good mark after Jordan Reynolds robbed Luke Murphy out on the wing to set up the mark and it remained deadlocked at 0-7 to 1-4 at the break after Beirne (free) and Tom Prior from 50 yards swapped points. 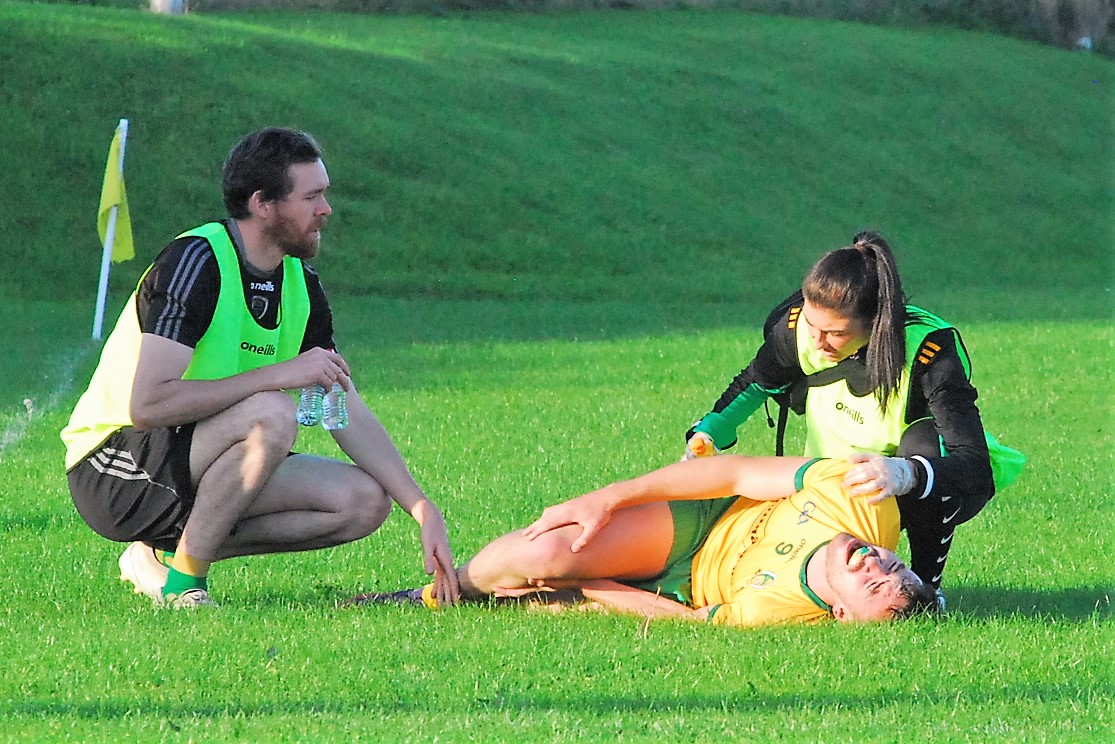 Ballinamore's Dean McGovern is tended to by Phillip Farrelly and Laura O'Dowd after sustaining a knee injury Picture: Willie Donnellan

Shane Moran opened the scoring after claiming a high flying mark before he went into the book for a late foul on Alan McLoughlin. Keith Beirne tied the scores while the Ballinamore faithful must have really believed the Gods were against them Tom Prior's pass found sub Peter Reynolds in behind the Mohill defence. A goal looked certain but keeper Padraig Tighe advanced off his line so quickly that he forced the Ballinamore man to go wide and Reynolds could only crack his shot off the post in a real let off for Mohill.

Good work from Michael McKiernan set up Tom Prior for a fine point but a well worked Mohill move ended with Domhnaill Flynn scoring a brilliant high dropping effort to tie the scores on eight minutes. Beirne hit a long range free wide before Michael McKiernan and the Mohill captain again missed the target.

Mohill went in front on 12 minutes when Shane Quinn and Sean Harkin did well to break through tackles to set up Jordan Reynolds for a fine point but patient play from Ballinamore ended with Luke Murphy notching another point. Niall McGovern edged Ballinamore back in front when Paul Moran did well to get his hand to a Mohill kickout and Tom Prior provided the final pass.

The younger Moran got in on the scoresheet with a wonderful 50 but as the gap went to two, Keith Beirne put a free from about 53 yards over the crossbar. Long range points were all the rage as Luke Murphy then kicked a wonderful effort from 50 yards with less than minutes of play left on the clock.

Ballinamore were looking good at this point but Shane Quinn quickly assessed Mohill needed something special and his huge 50 yard effort with just over three minutes to go left a point in it again. Mohill were pushing for an equaliser with Beirne leaving a long range free short while the Ballinamore defence blocked Jordan Reynolds effort from close range.

The home side had chances as Niall McGovern thumped a long range sideline ball wide but it looked as if all their hard work was for nought as a high ball broke kindly to sub Fiachra McGuinness who kicked the ball over the bar with just over 20 seconds of the three minutes of added time left on the clock.

Both sides went for the win but it was Ballinamore who won the ball yet there seemed little danger when a high ball was sent in towards the Mohill goal. It was pretty clear it would fall short but Mohill keeper Padraig Tighe was left to battle for the ball with Paul Moran, the ball breaking for Tom Prior who carefully cut the ball from a tight angle between the posts for a famous winner.