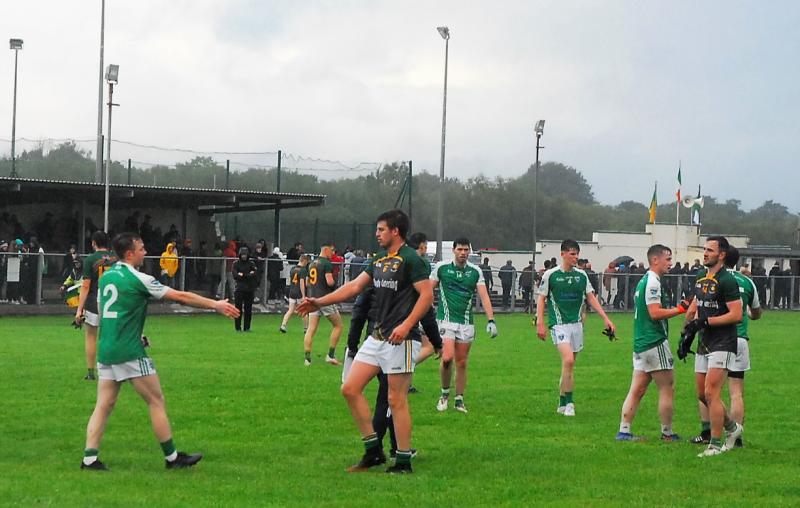 Aughnasheelin sealed their place in the knockout stages of the Smith Monumentals Intermediate Championship on Saturday evening as they easily repelled the challenge of Drumreilly to remain the only beaten team in the competition after Annaduff fell to an eight point loss at the hands of Allen Gaels.

On a night when the weather made playing conditions difficult, the focus was on the third round of the Intermediate grade and Aughnasheelin put one foot in the semi-finals when they cruised to a 0-17 to 1-7 victory over hosts Drumreilly in Carrickmakeegan.

Despite being a doubt before a ball was even kicked, Aughnasheelin's Fintan Fitzpatrick was the game's dominant figure as his accuracy from placed balls and play saw him score eight points over the hour as the visitors withstood a typically defiant display from Drumreilly to emerge seven point winners.

Aughnasheelin started by far the better team and led 0-6 to 0-1 midway through the first half with points from Joey Earley, Gavin Sammon (2), Darragh Gunn, Aaron Hoare and Sean McWeeney (50) with only a point from Nigel Maguire in response. However, a Declan Maxwell goal against the run of play got Drumreilly back into hit and points from Mick Holohan, Conor Gaffney (free) and Dermot Holohan put them a point ahead in added time.

However, two late points for Aughnasheelin, who lost Cormac Sammon to a black card, from Niall Gallagher and Fitzpatrick had them back in front, 0-8 to 1-4, at the break. Aughnasheelin continued to power ahead three Fitzpatrick frees and points from Leitrim duo Ciaran Cullen and Aaron Hoare putting them ibnto a commanding six point lead midway through the half.

After that, Aughnasheelin held Drumreilly at bay with Fitzpatrick scoring some truly outstanding points to seal a comfortable victory that leaves his team two points clear at the top of the table with one game left to play.

Allen Gaels roared back to life in the championship when they inflicted a first defeat on Annaduff, turning on the style in the second half in Shane McGettigan Park to win 1-12 to 0-7. After a close first half, the visitors led 0-5 to 0-4 at the break and still led ten minutes into the second half by the same margin.

However, a black card for Annaduff proved costly as the visitors would fail to score for the rest of the game while Allen Gaels scored the game's only goal during the sin-binning to take complete control of the game.

Bornacoola picked up their second win of the competition at home when they handed Ballinaglera a 2-11 to 3-4 defeat. A tenth minute goal from Ronan Mulligan got the Bors off to a good start but Ballinaglera came roaring back with two goals in the space of three minutes late in the half. However, a goal from Leitrim star Damian Moran in added time gave the home side a 2-6 to 2-2 halftime lead.

The Bors would stretch their lead to six points before Ballinaglera put the game back in the melting pot with a goal after 48 minutes but the men in amber & black were not to be denied as two late points sealed their second victory in the competition.

There was huge drama in Pairc Cil Tiobraid as a late Barry McWeeney free ensured a share of the spoils for hosts Kiltubrid in thier 1-10 to 2-7 draw with Drumkeerin. The game opened with a real bang with both teams finding the opposition net inside the first five minutes with Fionn O'Brien the goal scorer for the home side after Daniel Maguire had fisted the ball to the Kiltubrid net a minute earlier.

The sides were level at halftime at 1-5 apiece but Drumkeerin seemed on the road to victory when James Gallagher (Corry) fisted the ball to the Kiltubrid net with less than six minutes from full-time to give his side a one point lead. However, an injury to Drumkeerin's Tommy Rogan necessitated a lengthy stoppage and when play resumed, two Barry McWeeney scores rescued a draw for the home team.

In the competition's final match of the weekend, Aughavas and Mohill both picked up their first points of the competition after they played out a 1-11 apiece draw in Philly McGuinness Park with Niall McCabe kicking the equalising point for the visitors. Unfortunately, the draw almost certainly rules both teams out of reaching the quarter-finals as they remain three points adrift of Kiltubrid and Drumkeerin.

Ronan Kennedy's first half goal helped Mohill to a 1-6 to 0-5 halftime lead but a blast of 1-1 from Fintan Gallogly put the game back in the melting pot. It was tit for tat after that with Kennedy's point three minutes from time looking as if it might hand Mohill their first win only for McCabe to kick the equaliser.

The draw for the final round of the Intermediate Championship will be made on Sunday.