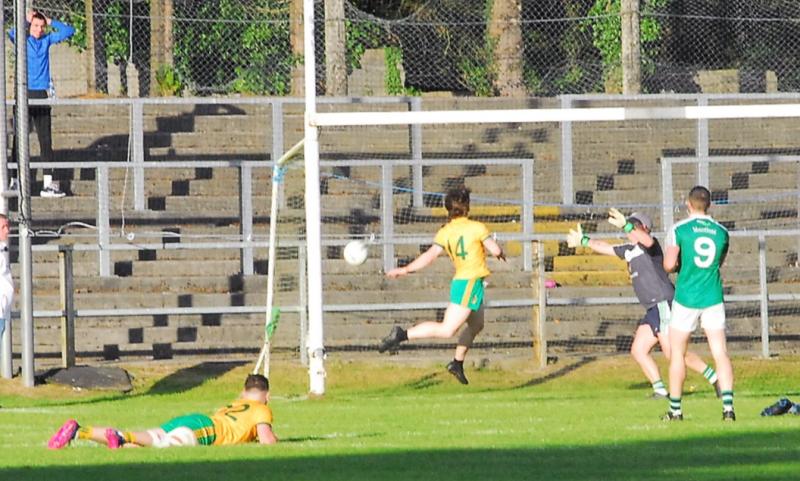 In a game that is strange to describe, Mohill were clearly the sharper, hungrier and more focussed side for three quarters of this game yet Ballinamore will rightly curse a missed goal chance for sub Mark McGrory midway through the second half after the champions had cut a one time Mohill lead back to a goal.

McGrory is famous for being at the right place at the right time to palm home goals and it seemed as if Ballinamore were going to draw level when the sub combined with Tom Prior to carve open the Mohill defence. McGrory made a good connection but put too much power on it to make sure keeper Padraig Tighe couldn't get to the ball and the ball flew wide.

With that, Ballinamore's chances of defending their crown evaporated as an impressive Mohill, led by the resplendent Beirne, tagged on five points before the finish to just one from the champions to seal their place in the semi-finals. It was tough on McGrory who had kickstarted a Ballinamore revival when he goaled barely seconds after coming on in the first half.

It was a superlative display from Beirne who had just three points from free, two from Wayne McKeon and one from Luke Murphy, at that point with Beirne scoring two marks, one free and two from play as Ballinamore simply couldn't lay a finger on the Mohill captain.

His pass for Keegan's goal was superb, placing the ball right in the hands of a running Keegan who blasted with style. For Jordan's goal, Beirne looked bottled up out on the sideline but he delivered the ball on the edge of the square to Reynolds who somehow outmanoeuvred two defenders to grab the ball and score from close range.

McGrory's goal came when Dean McGovern, a surprising starter given his serious injury in the group game between the teams, knocked a ball away from Beirne. Ballinamore got the ball to Wayne McKeon who launched what seemed like a scud missile from midfield right to the edge of the square with McGrory gathering and scoring with his first touch of the game.

After Beirne and Tom Prior exchanged points from placed balls, Prior from a mark, Mohill led 2-7 to 1-4 at the break but an early Dean McGovern point and a McKeon free got the gap back to four early in the second half. It would be tit for tat for a while with Brian Leydon and McKeon (two frees) swapping points with Beirne (two frees) and Shane Quinn.

Then came Ballinamore's golden chance - Domhnaill Flynn was caught in possession as Dean McGovern charged forward. He rode the tackle to get the ball to Mark McGrory who played a one two to navigate their way through a hastily retreating Mohill defence and it seemed certain they would score as Prior played the ball across to his teammate with a gaping goal in front of them.

It was a huge let off for Mohill and although Shane Moran reduced the gap to three points with less than 13 minutes to go, Mohill started to find their first half form again as Ballinamore's challenge started to wilt. Keith Keegan saw an effort blocked as he cut through before Beirne knocked a mark from just inside the 50 yard line over the bar.

Sean Harkin profitted from good work from Domhnaill Flynn to extend the lead to five with Beirne adding his tenth point with less than four minutes to go. Shane Moran and Ronan Kennedy swapped points before the last word fittingly fell to Keith Beirne who converted an injury time free to confirm Mohill's place in the semi-finals.