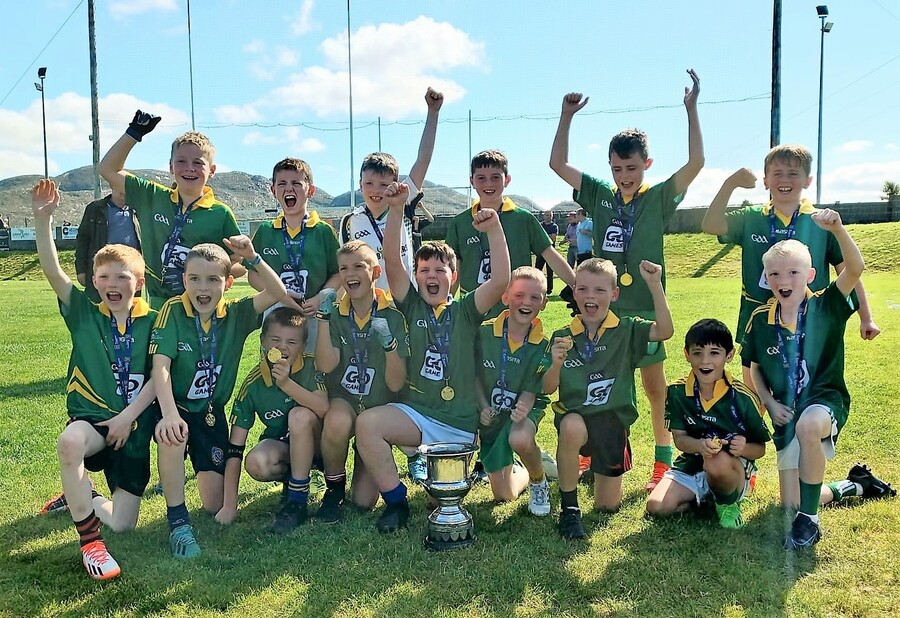 Ballinamore Area were crowned kings of Connacht on Saturday when they lifted the Connacht U10 Gaelic footballers title in Ballisodare at the Aldi Provincial Finals hosted by Sligo.

The Ballinamore Area, which takes in places from the Ballinamore Sean O’Heslins, Drumreilly, Aughawillan, Aughnasheelin and Fenagh St Caillins clubs, did it the hard way as they beat the Roscommon, Mayo and Galway champions on their way to title.

This turned out to be a game for the games with the teams level on numerous occasions before Oranmore held a two point lead with ten minutes to play. Matthew Prior struck 1-3 for Ballinamore to put the Leitrim side four points ahead only for the Galway lads to hit back and take a two point lead.

However, there was still time for an amazing finish from Ballinamore - Rory McNulty’s free found Harry Gaffney in front of goal and he laid the ball off to Daniel Kellet and his low shot found the Oranmore net.

With a one point lead, Ballinamore were under fierce pressure but a late Oranmore free drifted wide to spark wild celebrations among the Ballinamore supporters.

A night of late goals as Leitrim Gaels top group, St Mary's sneak past Ballinamore as champions set to meet once again

Keeper Darragh Conefrey and defenders Daniel Prior, Ryan McWeeney, Conor McGirl & Mark Conefrey, who did a superb job on Oranmore’s danger man, laid the foundations for a hard-fought victory.

Midfielder Rory McNulty put in a massive shift while Daniel Kellet’s fielding and winning goal was fabulous. Upfront Matthew Prior’s growing reputation was embellished with a tally of 1-6 was the perfect response while Adam Gill's link play and James Dillon’s scores were crucial in a most famous win for an exceptional group of young lads & their mentors.