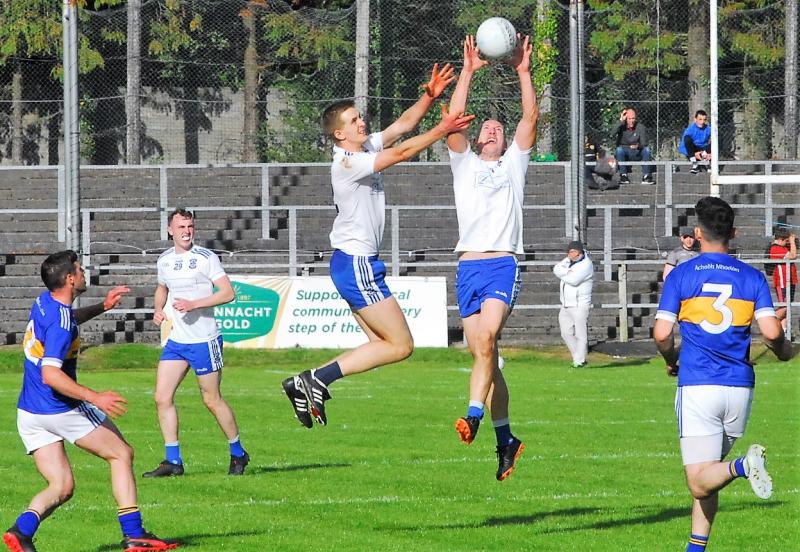 The excitement levels never really got off the ground in the first Connacht Gold Leitrim SFC Quarter-Final but that will matter little to a clinical and physically impressive St Mary's Kiltoghert who reduced Aughawillan almost to the role of bit players in the opening game in Avant Money Pairc Sean Mac Diarmada.

In a game that won't really live long in the memory, St Mary's ground Aughawillan down with long and exhausting periods of possession, an almost tedious game of keep-ball as they dragged their opponents over and back across the field with almost a casual detached indifference before ruthlessly applying the killer touch in the second half.

After conceding five goals against Mohill and three against Fenagh St Caillins, Aughawillan decided to flood their defence with their entire team camped for spells inside their own 50 in the hope that they wouldn't concede goals and St Mary's might be tempted into rash incursions in their defensive area, forcing turnovers that would enable the three time champions to hit on the break.

But St Mary's didn't bite - they played the ball over and back, over and back and over and back and while it lacked any sort of drama, it was incredibly effective as Aughawillan couldn't gain any momentum with turnovers and in Paul Keaney, they had an executioner in chief who fired over points from all ranges and angles.

St Mary's led 0-8 to 0-2 at the break and given what transpired in the first half, you'd have to say it was game over as the Carrick men exerted complete control against an Aughawillan team who actually started the best with a Morgan Quinn free after five minutes.

Jack Barnes levelled after good work from David O'Connell but two Paul Keaney frees, both from tight angles in the right hand corner, suddenly left two between the teams. Keaney then fired over from play before Jack Casey finished off a four minute period of constant St Mary's possession - yes four minutes - with a killer score.

When Aughawillan did break upfield, they tended to rush their shots against a tigerish St Mary's defence. Cian Singleton set up James McGrail for a good point before Ciaran Gilheany converted a free on 26 minutes. St Mary's finished the half with a point apiece from O'Connell, set up by Keaney, and a 50 yard Keaney free to leave them 0-8 to 0-2 ahead at the break.

Aughawillan did have a late chance when a long ball was fielded by Morgan Quinn who instantly released Ciaran Gilheany but he drove his shot into the side net. Conor Farrell, a long way from his full-back spot, stretched the lead after good work from Diarmuid Kelleher three minutes into the second half.

Aughawillan would then have their best spell of the game with five points to two for St Mary's in a ten minute spell. Michael Quinn drove through the centre of the Mary's defence to point on four minutes but it took five minutes for their next score, Barry Prior scoring from long range.

Paul Keaney replied from a free but points from Morgan Quinn, moved in for dissent, and a fisted Christy Prior effort cut the gap back to four. Jack Barnes scored a good effort before Sean Quinn's good work set up Mark Plunkett for a point on 14 minutes.

But any hopes Aughawillan might have had of getting back into the game were ruthlessly killed off a minute later when Nicholas McWeeney's surging run with James McGrail saw them cut through the defence before finding Cian Singleton trailing just behind them and his clinical finish found the net on 45 minutes.

Ciaran Gilheany tapped over a free with an instant response but St Mary's almost had a second goal only for David O'Connell's shot to be diverted out for a fifty by Colin Maguire, Paul Keaney firing over from the placed ball.

Gary Plunkett and Keaney (free) swapped points before St Mary's put the icing on their cake when Sean Reynolds' monster kickout went beyond the opposition 65. St Mary's worked the ball in towards David O'Connell but the ball broke loose and sub Brian Farrell fired home from close range.

Fergal McTague replied for Aughawillan with a point it was cancelled by a score that summed up the game. A poor Carrick kickout should have led to a heavy punishment but Conor Farrell wrestled the ball from the grasp of an Aughawillan forward. He then combined with his brother Brian and they worked the ball down the field for sub Brian O'Donnell to fire over.