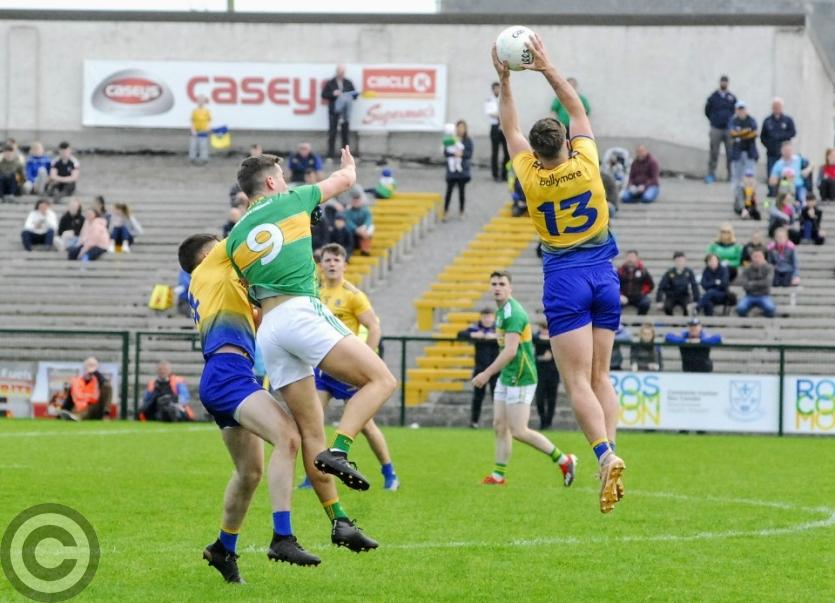 In a disappointing echo of the last four years, Leitrim’s high hopes of challenging Roscommon in the Connacht Senior Championship were ground into dust by a rampant home team in Dr Hyde Park on Sunday.

Fresh from promotion and an influx of confidence and self-belief, Leitrim travelled to Hyde Park believing they could close the gap on the Rossies but apart from a missed goal chance in almost the very first minute, it was Roscommon who set the tone in this encounter.

Anthony Cunnigham’s side paid Leitrim the compliment of taking the Green & Gold challenge very seriously and it showed in the way they went about sticking daggers into Leitrim, Shane Killoran burying two killer goals in the first 15 minutes that effectively killed off this game.

The difference between Division 1 and Division 4 football was starkly illustrated in this game, Roscommon’s immense physicality seeing them break through Leitrim tackles with ease and stripping the ball from Leitrim hands, never better illustrated by three Leitrim defenders unable to stop Shane Killoran for his second goal.

Leitrim now go into the qualifiers and Terry Hyland faces a tough task in lifting his team after the sheer disappointment of this encounter. 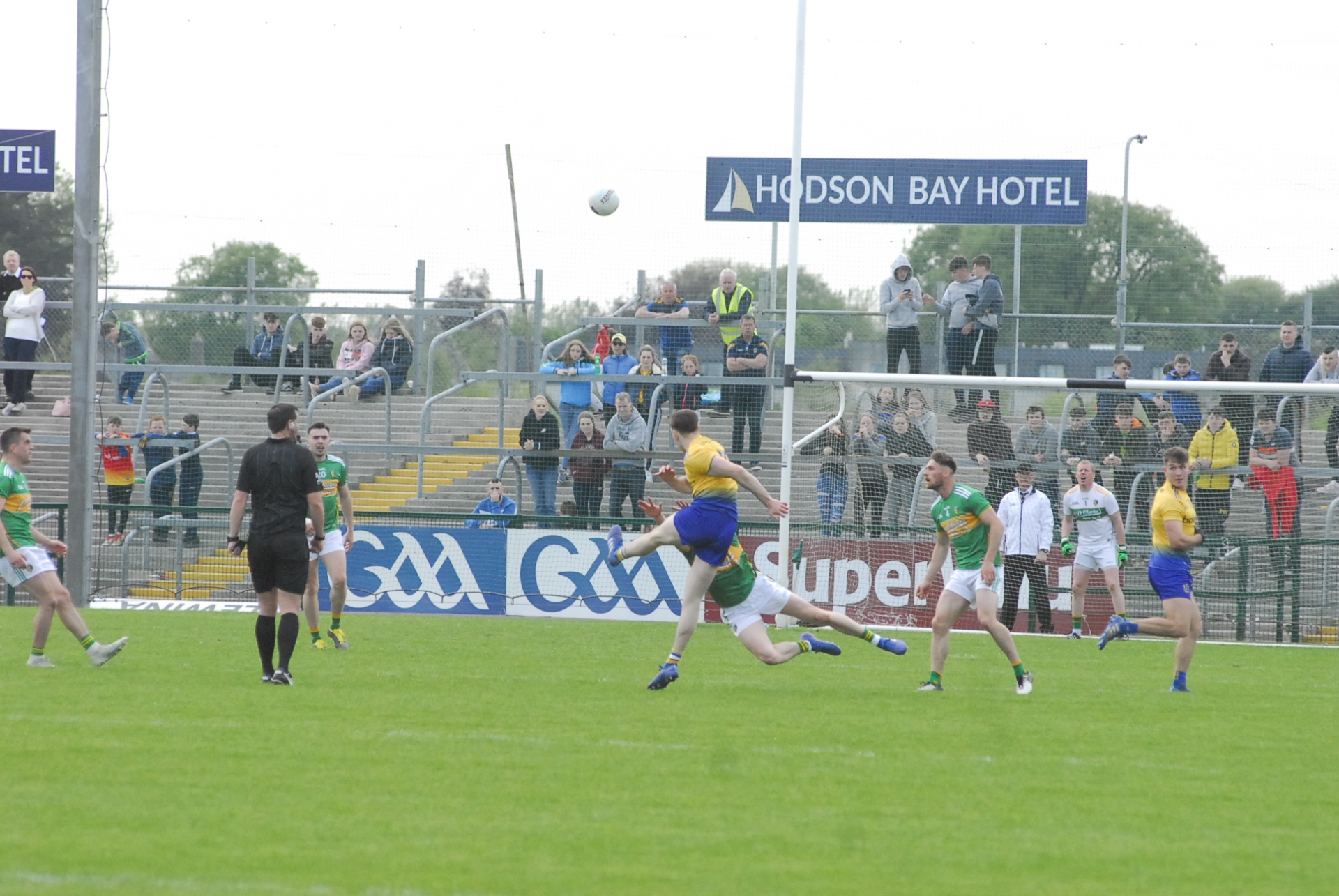 A Roscommon player fires the ball over the Leitrim bar. Picture: Willie Donnellan

Leitrim almost had the perfect start when a high ball into the Roscommon goalmouth was spilled and Shane Moran, situated at full-forward, did brilliant work to get a chance but his shot was smothered by keeper Darren O’Malley.

Roscommon too weren’t at their best with Diarmuid Murtagh putting a free wide and Ultan Harney and Niall Daly hitting bad misses but they were all forgotten on five minutes when Conor Hussey’s run through the centre saw him find Shane Killoran unmarked and the Elphin man blasted to the net.

It almost got worse when Diarmuid Murtagh got in behind the defence but Fergal McTague managed to get a vital block to deflect the ball out for a fifty that keeper Darren O’Malley hit well wide.

Roscommon were through again on goal a minute later when Ultan Harney broke through but Cathal McCrann made a superb full length diving save to concede a fifty, this time O’Malley was successful with the kick.

Ryan O’Rourke opened Leitrim’s account from a free after a foul on Evan Sweeney and a foul on Shane Moran a minute later allowed Domhnaill Flynn to tap over but the goal chances were still there and Shane Killoran missed a great chance on 13 minutes.

But Killoran didn’t have long to wait for his second goal when a long ball was worked through to the Elphin man and despite four Leitrim defenders trying to stop him, he fought his way through and fired powerfully to the net on 15 minutes.

Diarmuid Murtagh fired over a minute later and Leitrim were left rueing a missed chance when a high ball broke over Sean Moran but Sean McWeeney fisted the follow-up wide with a score for the taking.

Ultan Harney was taken down on the way through, on the edge of the square, and Murtagh tapped over a close range free before Dean McGovern replaced Fergal McTague. A foul on Harney led to a yellow card for Shane Quinn and a succesful free for Murtagh on 25 minutes.

A strong Ryan O’Rourke run saw him find Ray Mulvey through on goal but the St Mary’s man close range shot was tipped over the bar by O’Malley on 26 minutes but from the kickout, Roscommon strode right down the middle of the field and Conor Cox fisted the ball over the bar.

A soft enough free for a foul on Shane Moran saw O’Rourke tap over a Leitrim free and from the resulting kickout, Leitrim intercepted and a cynical, or clever depending on your point of view foul, on Shane Moran by Conor Hussey resulted in a successful Domhnaill Flynn free.

But that was as close as Leitrim were to get - another long ball to Diarmuid Murtagh led to another Conor Cox point before Roscommon again exposed the centre of Leitrim defence, a long free to Cox suddenly offering possibilities.

Cox’s strong run saw him leave several Leitrim defenders for dead and a pass to the unmarked Niall Kilroy allowed the wing-forward fire low to the net.

A defiant Shane Quinn hit back with a massive 50 yard effort while good work from O’Rourke and Moran led to a good point from Pearce Dolan, leaving the halftime score at 3-6 to 0-7 for the home side.

The second half started just like the first with a blocked goal chance, this time Conor Cox denied a goal but the Roscommon men came through the middle again for a fine point. Fouls on Shane Moran were proving Leitrim’s main source of scores with one apiece from Flynn and O’Rourke.

Leitrim were trying to create goal chances but Niall Kilroy made a vital block on Pearce Dolan as he sought a goal. Leitrim’s wides were been copied by Roscommon as the game went five minutes before Conor Cox swapped frees with Domhnaill Flynn.

Cox and Andrew Glennon added points from placed balls as the lead suddenly stretched to ten points and the game was over with 15 minutes to go. Leitrim’s cause wasn’t helped by a second yellow card for Shane Quinn, sub Andrew Glennon tapping over his second free.

Roscommon now seemed to be scoring at will with Niall Kilroy, Colin Compton, Fintan Cregg, Compton (free) and Cathal Heneghan all tapping over easy points.

Ryan O’Rourke had two frees in the closing minutes, the second after Roscommon corner-back Conor Daly picked up a second yellow card for a foul on Shane Moran just into added time. Typically, Roscommon still had time for a response, Fintan Cregg scoring a massive point from a free to leave Roscommon 14 point winners.

SEE THIS WEEK'S LEITRIM OBSERVER FOR REACTION AND ANALYSIS