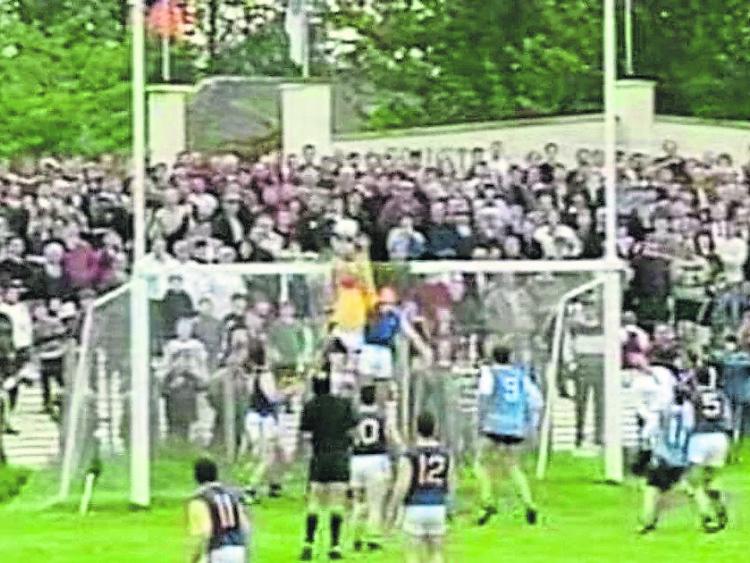 Aughawillan goalkeeper Martin Prior, with the aid of Martin Flanagan, plucks a late free from Allen Gaels' Martin McGowan from above his bar in the dying moments of the 1994 county final

The eyes of the country will be tuned in to Croke Park on Saturday evening with everyone hoping the drama of the All-Ireland final replay can match that of the drawn game.

When the dust settled on the drawn game and players, pundits and spectators had an opportunity to draw breath, one of the main talking points arising from the game was a controversial tactic that Kerry looked ready to employ prompting many to ask the question - had anyone tried to lift a team mate before in order to prevent the concession of a point?

Aughawillan did it successfully in the Leitrim County final in 1994. Their team included Declan Darcy. Won it by 1 point.

It didn't take long for the question to be answered as memories wandered back to the 1994 Leitrim Senior Championship Final when Aughawillan defeated Allen Gaels by the narrowest of margins and used that exact tactic to ensure victory.

With time running out in the drawn game between Kerry and Dublin, Dean Rock stood over a free that if successful would have secured the much sought after five in a row for the Dubs.

Opting not to take a leaf out of the Mayo book and throw a GPS device at the free taker, Kerry instead looked to the men from Aughawillan for inspiration!

Happened in Leitrim County final 1994, Aughawillan won the game by a point.

In the dying stages of the 1994 Senior Championship Final, Martin Flanagan helped hoist goalkeeper Martin Prior above his crossbar to pluck Martin McGowan's free from the sky before it dropped over the bar. That intervention helped ensure Aughawillan claimed the county crown by the narrowest of margins.

Eagle-eyed observers took to social media when they observed Kerry's giant midfielder, David Moran, positioning himself on the goal line with team mate Tommy Walsh grabbing a firm hold of his jersey in preparation for the lift!

Ultimately Dean Rock's free was off target meaning there was no intervention required from Walsh or Moran but it immediately had fans asking on social media if such a trick had been attempted before and many more seeking clarity on whether or not such a move is within the rules of the game.

Keen followers of Leitrim football were quick to let the world know via social media that it was the 'Willies' who had devised the ingenious 'lift'.

The Aughawillan social media team have subsequently trawled through the archives and found grainy footage of the famous incident while some of those directly involved have been recounting their version of events from a quarter of a century ago to the nation.