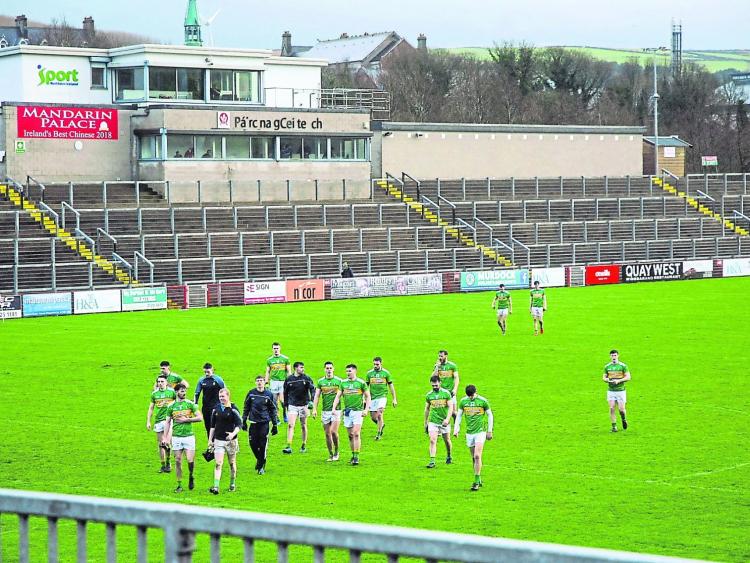 It is the warning nobody needs - Division 3 of the Allianz National Football League promises nothing less than a war of attrition and nobody knows that better than the Leitrim players, management and fans ahead of what is potentially an enormous League campaign.

A rematch of last year's Division 4 Final against Derry is first up for Terry Hyland's side in Celtic Park this Saturday (5pm throw-in) and never has the maxim of “a good start is half the battle” ever been more true.

The Leitrim manager knows this and, canny operator that he is, has publicly proclaimed the third division a much tougher prospect than Division 2: “It is going to be exciting, it is our first Division 3 campaign after so long in Division 4 but if you look at the quality of the teams that is in that Division 3, I look at Division 2 sometimes and wondering which is the harder division?

“That’s where we are and it is where we wanted to be but if you don’t put your hand in the fire, you’ll never know how hot it is.”

Even after the FBD league loss to Roscommon, Terry remarked “Somebody asked me this question about Division 2 and Division 3 and on paper, it is a very strong Division 3,” said Terry, “You have the likes of your Corks and Derrys and Tipperarys and Downs, teams that are traditionally up the ranks.

“It is not going to be an easy Division for Leitrim or anybody else in it but at the end of the day, we have to get ourselves ready for it, going forward we have to make sure that we have as many fit lads as possible for that.”

Read Also: Turning the GAA world on its head

In a League where every game is going to be fought with almost championship intensity, setting the tone at the beginning is key so performing against Derry is going to be key.

The Ulster men surprisingly lost their manager last year but appointing former Donegal and Fermanagh manager Rory Gallagher suggests that Derry are full on intent on getting one of those two coveted promotion spots.

The fact that the top two teams in the Division will earn a place in the Tier 1 championship once they are knocked out of their provincial championship is a prize too large for the likes of Cork, Down, Derry and Tipperary to ignore.

Tipp have a bit of wiggle room, situated on the other side of the draw to Cork and Kerry, but a failure to gain promotion and a failure to beat Kerry would mean Tier 2 for Cork and with all their off-the-field problems, hard to see the Munster behemoths accepting that.

Derry are drawn on the same side of the draw as Armagh, Donegal and Tyrone but Down's path is scarcely easier with Cavan, Monaghan, Fermanagh and Antrim in their way.

Don't forget about Louth, a county Leitrim have had a somewhat up and down relationship with over the past five years with wins in the League and Championship over the Wee county coupled with a heavy Qualifier loss and Louth reaching Division 2 at one stage.

Some believe Leitrim be wise to target neighbours Longford as well as Louth and Offaly for their most likely opportunities but the fact of the matter is that every county in the Division will regard their clash with Leitrim as an altogether eminently winning game.

So nobody will let down their guard or throw-in the towel when it comes to the Green & Gold.
My feeling is that Leitrim need a big performance next Saturday in Derry, whatever happens with the final result, to set the tone for the remainder of the League.

A win would bring belief and excitement back and energise the entire county, let alone players and management but a strong performance, with something to build on, is an absolute must.

Under Gallagher, Derry may not be quite as open as they were last year but with their forwards, the Oak Leafers have the ability to take scores and leaking scores was a major problem in the Roscommon game.

A couple of losses in the McKenna Cup had Rory Gallagher unhappy about his team's preparations but the losses came against Donegal and Monaghan while he also introduced some new talent.

The losses mean that Derry won't be going into this game blind or cocky and their tough jousts with Terry Hyland's men last year ensure the home side will not take Leitrim for granted.

Leitrim will show a major jump in form, no doubt, but equally Derry will jump up several levels. Derry will start as favourites but Leitrim will, at the least, need to put in performance that can inspire them for the rest of the campaign.