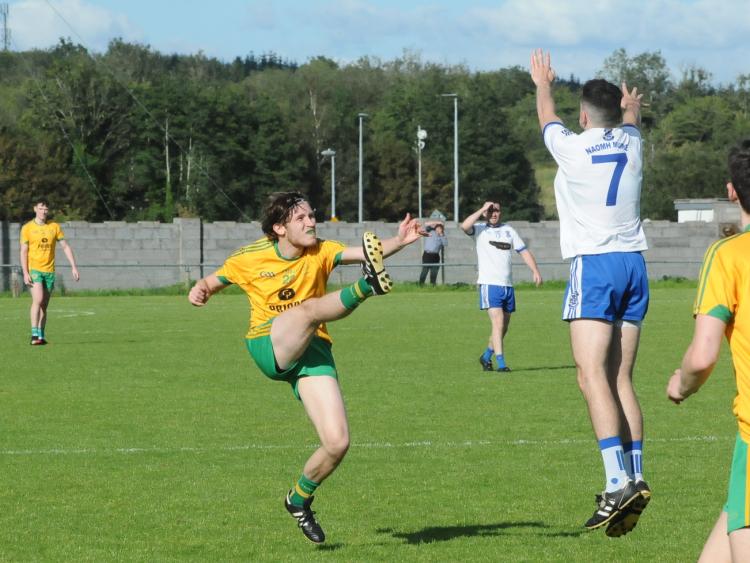 On a weekend when St Mary's completed another amazing injury time recovery to snatch victory and Aughawillan saw their championship dreams end, Melvin Gaels sent out a big message that they will have a big say in the destination of the Connacht Gold Leitrim SFC this year by handing defending champions Glencar/Manorhamilton a six point loss.

Playing at home in Kinlough, the Gaels stormed to a 4-11 to 1-14 victory that was set up by a superb first half as their redeveloped Melvin Park. James Phelan's side led 3-10 to 1-8 when Cillian McGloin grabbed a fourth goal for the victors.

The loss is the first for the defending champions in Group 2 and sees them regain top spot but Glencar/Manor have a chance to claim the top spot when they take on Leitrim Gaels next weekend. For Melvin Gaels, it has been a remarkable recovery after their heavy loss in the first round to Leitrim Gaels.

A severely understrength Leitrim Gaels made light of the absence of Colm & Enda Moreton, David Bruen and Eunan Treacy to record a hard fought 0-13 to 1-8 win over Drumreilly. The Gaels actually led by five point coming near the end but a late Drumreilly goal left them with a nervous finish.

The victory confirms Leitrim Gaels place in the quarter-finals while Drumreilly face a winner takes all clash with Allen Gaels in the final round next Saturday.

In Group 1, the so-called Group of Death, all that remains to be sorted is what order the quarter-finalists finish in after St Mary's surprised last year's County Finalists Ballinamore Sean O'Heslin's with a high scoring 0-19 to 1-15 victory in Pairc Naomh Mhuire.

And when Fenagh St Caillin's proved far too strong for a battling Aughawillan, winning 2-15 to 2-10, it meant that Aughawillan will contest the relegation series with Mohill, Fenagh, Ballinamore and St Mary's qualifying for the semi-finals with only their finishing positions to be sorted next weekend.

The first game in Pairc Naomh Mhuire was a real high scoring shootout with St Mary's leading 0-10 to 0-7 at the break but perhaps ruing a missed Robbie Lowe goal chance and a couple of bad wides from frees.

Lowe should have had a goal but his fisted effort flew just over the bar with only the keeper to beat while Tom Prior saw a good goal chance saved at the other end. Ballinamore twice closed the gap to a point and drew level after 51 minutes only for St Mary's to surge two points clear in injury time with points from sub Joe O'Rourke and full-back Conor Farrell.

However, with two minutes played, Ballinamore looked as if they had snatched a famous victory when Tom Prior snatched a brilliant goal out of nowhere to put his team a point up. However, a black card for Dean McGovern kicking the ball away and the return of David O'Connell from his earlier black card gave St Mary's a man advantage.

In Fenagh, Aughawillan knew that anything less than a win would mean the end of their championship hopes and they started well, despite Riordan O'Rourke profitting after Aughawillan keeper Colin Maguire lost the ball. That actually put Fenagh in front 1-1 to 0-3 after Aughawillan's strong start but they were quickly back in front when Sean Flanagan was taken down, Flanagan then sending the spot-kick unerringly to the net.

Fenagh responded well and hit six points to one from Aughawillan to lead by three but two late scores from Michael and Morgan Quinn left just a point between the sides at the break.

Pearce Dolan levelled the scores less than half a minute into the second half but two from Oisin McLoughlin got Fenagh up and running. Three unanswered points in as many minutes was followed by a goal from Ryan O'Rourke after a long kick from Riordan O'Rourke, caught by sub Fergal McLoughlin. He found his brother Oisin and his pass left an unmarked Ryan O'Rourke with an easy palmed goal on 14 minutes.

Aughawillan closed the gap back to five points at one stage but with Donal Wrynn in imperious form at full-back for Fenagh, Aughawillan were unable to generate the momentum they needed. Fenagh were leading by eight points when Sean Flanagan, for the second game in a row, found the net for a second time, a low shot evading keeper and defender.

Unfortunately for Aughawillan, it was too little too late as their championshp came to an end.