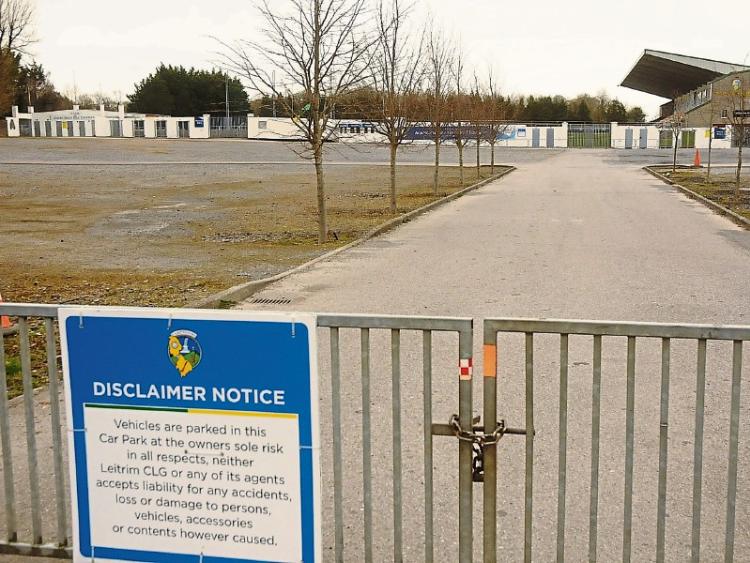 The closed gates of Avantcard Pairc Sean Mac Diarmada and various other grounds around Leitrim will greet fans next weekend Picture: Willie Donnellan

If a tree falls in the forest, does anyone hear it is a question beloved of philosophers. Next weekend, fans up and down the length of Leitrim get to ask a unique version of that very question - if a championship game has no fans, it is really a championship game?

The Government's decision to ban spectators from all sporting events cut short a revolution by Leitrim clubs after the County Board's decision to ban fans from the Connacht Gold Senior and Smith Monumentals Intermediate Quarter-Finals but the ban will really bite deep when the first ball is thrown-in on Saturday.

This weekend's games will truly test out claims about the effectiveness of internet coverage around the various nooks and crannys of Leitrim and we really will see if Leitrim have entered the digital age!

Whatever the debates over the merits of the Government's decision, the absence of fans will have a very practical effect on the outcome of the quarter- finals for we all know the power of an energised fan base to sway a referee with well timed roars and shouts.

While no team will be playing at home, the example of soccer during the Lockdown is a startling illustration of the power of the crowd - decisions that were swayed by the home team factor went way down as referees, with less noise and pressure to deal with, were less influenced by outside factors.

The question for teams is do they up the ante is terms of questioning and pressurising the man in the middle or would that be counter- productive? It is the sort of question that no team has ever had to ask themselves and it will be interesting to see what answer teams arrive at.

These quarter-finals are taking place under rather unique circumstances and you have to wonder who is best equipped to deal with what the “new normal” has brought to the sporting world.

Injuries are going to test teams out - it was noticeable how many teams are carrying big injury lists and most teams will go into their games worrying about how their players will stand up to the challenge.

We will also test out the conventional wisdom that Group 1 was a much tougher that Group 2. Certainly, the standard did look higher in Group 1 but if sport was all simply charts and figures, all we would do is predict the teams from Group 1 to win.

Below we take a look at what promises to be a really exciting set of contests in the Senior Championship with all quarter-finals taking place in Avantcard Pairc Sean Mac Diarmada:

Conventional wisdom suggests Allen Gaels will test the League champions before fading in the final stages as Mohill will cruise to inevitable victory. It is an easy storyline to sell but if anyone looks closely at Drumshanbo's games this year, they will see that the Gaels have been finishing their games with a flourish even if the result haven't gone their way - write them off at your peril!

Simply put, Allen Gaels have nothing to lose here and that makes them dangerous. They have hungry, pacy forwards capable of grabbing a score and they won't play with the same nerves that restricts a team in knockout football and that freedom may just allow them to flourish.

Mohill have been running up big scores with Keith Beirne really leading the way as a new generation of players are claiming starting berths. The Harkins, Jordan Reynolds, Fiachra McGuinness are giving an already powerful Mohill huge mobility and running power and they know how to use it.

Liam Keenan's team might have lost their first game to Ballinamore but they've been pretty much perfect since then and the only thing that could derail them is injury or indiscipline, something that could happen as Allen Gaels and Mohill are both intense teams who like to get in the faces of their opponents.

James Flynn has been superb for Allen Gaels so far but he will need a lot more support. Mohill will try to swarm the Gaels in battle for possession in the middle of the park and this is where it will be won or lost. Mohill may just have too many weapons for Allen Gaels.

The face of Leitrim GAA is changing so rapidly that this was an Intermediate Semi-Final just two years ago but both teams really look like coming powers at senior level.

What Gaels team we will get here depends very much on how their injuries have cleared up. You'd have got long odds on Mal Guckian's side surviving without David Bruen, Colm & Enda Moreton, James Flynn and Eunan Treacy but without that key quintet, they were very unlucky not to beat Glencar/Manorhamilton the last day out.

Remember, a full strength Gaels are the only team to lower the colours of a Melvin Gaels team regarded as one of the favourites for the title.

For all that, Fenagh St Caillin's won't fear them for they know them well and they are riding their own golden generation right now.

In terms of attacking potential, few can match the threat of a fully fit Oisin McLoughlin, Ryan & Riordan O'Rourke while their midfield maestro Donal Wrynn can battle whatever twin towers Leitrim Gaels can boast, the return of Colm Moreton after suspension a massive boost.

There is no doubt that Fenagh were in a tougher group and they've really impressed but Leitrim Gaels might have the better strength in depth. A full strength Gaels are a physical powerhouse but Fenagh have matched them in the past and the men in red & black are older, stronger and wiser than they were.

I'm not hedging my bets when I say either team can win here but if Leitrim Gaels are at full-strength and ready, I think they will do it. Anything less and Fenagh will march on.

A contest you'd have got long odds after the first two rounds but both these teams will look on this game as eminently winnable as the path to the Senior Final opens up before them.

Melvin Gaels were dire in their first outing against Leitrim Gaels but have been a revelation since, so much so that they are being tipped as one of the favourites. Their ferocious work-rate and appetite for battle remains but central to their progress is the tandem of Darragh Rooney and Emlyn Mulligan.

Mulligan supplies the ball, Rooney is the executioner and with due respect to some very good Gaels players, stopping their deadly partnership is key to stopping Melvin Gaels.

For St Mary's, they remain an enigma wrapped in a question mark. They are a transformed team since their first two games, so much so that some see them as dark horses for ultimate glory in September.

There are areas they need to work on: they miss too many chances and they've let teams they should have buried back into games when they shouldn't have. Yet for all that, when push comes to shove, the Carrick men have displayed an awesome ability to rally from the depths of hell and win games in the most dramatic fashion.

Belief is growing in the St Mary's camp but the Kinlough men are equally confident. Last year's quarter-final between the same sides turned out to be a damp squib. I don't expect that this year but much will depend on how St Mary's young players deal with the in-your-face intensity of Melvin Gaels.

The Gaels are slight favourites and in Darragh Rooney, they have a player who may be unstoppable. But there is a feeling that St Mary's are growing into a hard team to beat and a shock might be on here.

This should be the big clash of the weekend, a repeat of last year's County Final as the legendary Glencar/ Manorhamilton side come up against a Ballinamore side baying for revenge.

It has all the ingredients of a blockbuster but current form makes it hard to know who are favoured in this one.

You get the sense that Glencar/Manor did just enough to come through the group stages in what is regarded as the weaker of the two groups. They don't seem to be firing on all cylinders yet but if there is one team who knows how to peak at the right time, it is Manor's vaunted champions.

The loss of Pat Gilmartin is, however, being keenly felt by the champions while the amount of goals scored by Melvin Gaels and chances created by Leitrim and Allen Gaels is bound to worry the champions brains trust.

After such a bright start, Ballinamore surprisingly come into this game under a cloud, wondering if injuries to key players will clear up in time for them to have a real crack at the title. The absence of Oisin McCaffrey & Shane Moran was sorely felt, even for a team of their embarrassment of riches.

The return of the county duo and a healthy Luke Murphy is key for O'Heslins, particularly after they let winning positions slip against St Mary's and Fenagh while their reliance on Wayne McKeon's spectacular freetaking could be a problem if they meet a disciplined defence.

There is a feeling that Manor haven't been hitting top form so far and if that is the case, I'd take Ballinamore to advance here.