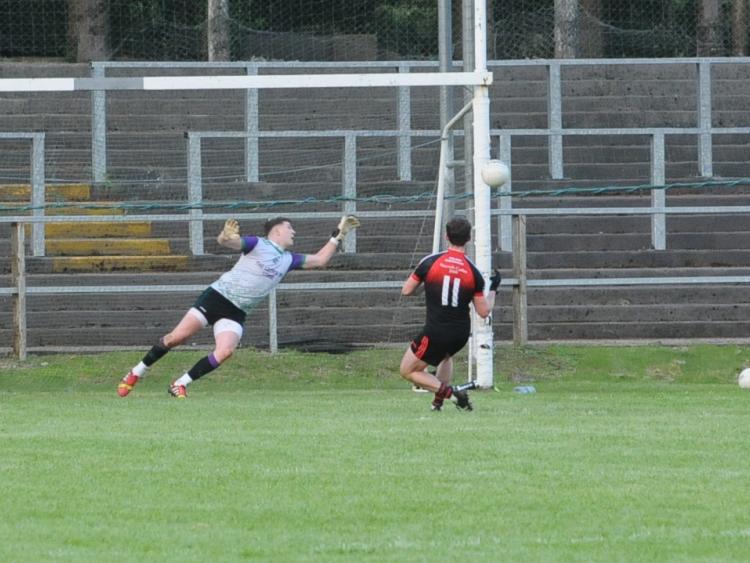 A late goal might have put a bit of flourish on their victory but there was no doubting that Fenagh St Caillin's young guns finished by far the stronger in the Connacht Gold SFC Quarter-Final in Avantcard Pairc Sean Mac Diarmada as Leitrim Gaels were unable to match their power, speed or desire.

In a match that saw the sides trade blow for blow, score for score, Fenagh St Caillin's held their nerve to 2-2 in the final 15 minutes of action to book their place in the semi-finals as a tired looking Leitrim Gaels were unable to counter the speed and resilience of the victors.

Ryan O'Rourke opened the scoring with a fisted point on the first minute before a Stephen Goldrick pass put Aidan Flynn in for a Leitrim Gaels equaliser on three minutes. Two minutes later, David Bruen's superb snap shot from 45 yard flew low but straight over the bar as Mal Guckian's side took the lead.

That lead last barely a minute as Riordan O'Rourke collected a low Donal Wrynn fifty, turned sharply and fired over while Leitrim Gaels suffered a big blow when Liam Moreton was black carded for a late challenge.

Ryan O'Rourke converted a free after a foul on Oisin McLoughlin but back came Leitrim Gaels, Stephen Goldrick converting a free after a foul on David Bruen on 10 minutes. A wonderful move out of defence from Fenagh ended up with Donal Wrynn being found all alone in space and he swept the ball over the bar from some 45 yards.

Again, Leitrim Gaels hit back, Enda Moreton doing incredibly well to hold off his man before curling his shot over the bar. Ryan O'Rourke and Stephen Goldrick swapped points but Fenagh started to edge ahead, Riordan O'Rourke collecting a great pass from Mark Keegan to score.

Leitrim Gaels were denied a point when Jack Flynn's shot hit the post and after the break, Oisin McLoughlin stretched the lead to two points. Stephen Goldrick had a long range free caught on the line by Aaron McLoughlin and Fenagh made the most of it, Oisin McLoughlin collecting a mark and firing over.

Three missed chances cost Leitrim Gaels dearly and Fenagh stretched the lead to four points over two minutes into added time when Donal Wrynn converted a 45 yard free to leave them 0-9 to 0-5 ahead as the halftime break approached.

That lead was dramatically wiped out just before the break when Enda Moreton gathered a long pass on the run, beat his man, cut back inside two defenders and then fired brilliantly to the net to leave Fenagh 0-9 to 1-5 ahead at the break.

Liam Moreton and David Regan combined to set up Eunan Treacy for an equaliser after just 25 seconds with Fenagh losing full-back Aaron McLoughlin to injury at the same stage. Fenagh went back in front when Fergal McLoughlin fielded a long delivery and turned neatly to score on three minutes.

Leitrim Gaels missed two good chances before Enda Moreton and David Regan combined to free Liam Moreton, the midfielder firing over from 50 yards plus to tie the scores. The Gaels were now pushing forward in waves and David Bruen shot narrowly wide from distance on nine minutes.

But the moment that cost them dearest came two minutes later - Liam Moreton and Jack Flynn combined brilliantly down the left wing, playing a one two before Moreton found the unmarked Stephen Goldrick in front of goal with only keeper Shane Doonan to beat. Unfortunately for the Gaels, Goldrick's shot beat Doonan but also the far post as it dribbled wide of the far post.

Fenagh immediately hit back and Leitrim Gaels were lucky not to concede a penalty when Ryan O'Rourke was taken down as he charged through on goal. Paddy Flynn was booked and O'Rourke converted the free. Three minutes later, an ambitious O'Rourke free from the sideline broke in front of goal, Conor Dwyer winning the ball to set up Oisin McLoughlin for a point.

Leitrim Gaels went close to another goal when Liam Moreton fisted effort from a cross-goal pass cannoned off the woodwork and rebounded clear. It wasn't all Leitrim Gaels chances as Ryan O'Rourke saw a goal chance saved by the excellent Ryan O'Rourke.

But the crucial goal did arrive with less than six minutes left in the half: Fenagh broke down another Gaels move and broke clear. Donal Wrynn charged through the centre of the Gaels defence and appeared to lose control at just the vital moment. But the County man managed to toe poke the ball to Ryan O'Rourke who drilled the ball to the net.

That left Fenagh five points clear all of a sudden and some brilliant forward play saw Riordan O'Rourke free himself from his marker and he sped through to fist the ball over the bar. David Regan ended a 20 minute spell without a Gaels score by converting a free but the chances were coming fast and furious at either end.

Fenagh should have goaled twice with Brendan Flynn making a wonder save before he denied Aaron Smith, brought back on. However, Fenagh wouldn't be denied their second goal and when Riordan O'Rourke managed to field the ball behind the Gaels defence, he was dragged down and cousin Ryan O'Rourke unerringly sent the spot kick high into the top right hand corner of the net.

That was that and Fenagh are now in with Mohill in the hat for the semi-final draw.