When the group of death turns to life

In this week's THE LAST POINT column, John Connolly chats the dangers of making predictions, wonders about Willie Donnellan's powers and praise for Gerard O'Donnell as well as Leitrim GAA's broadcasting team 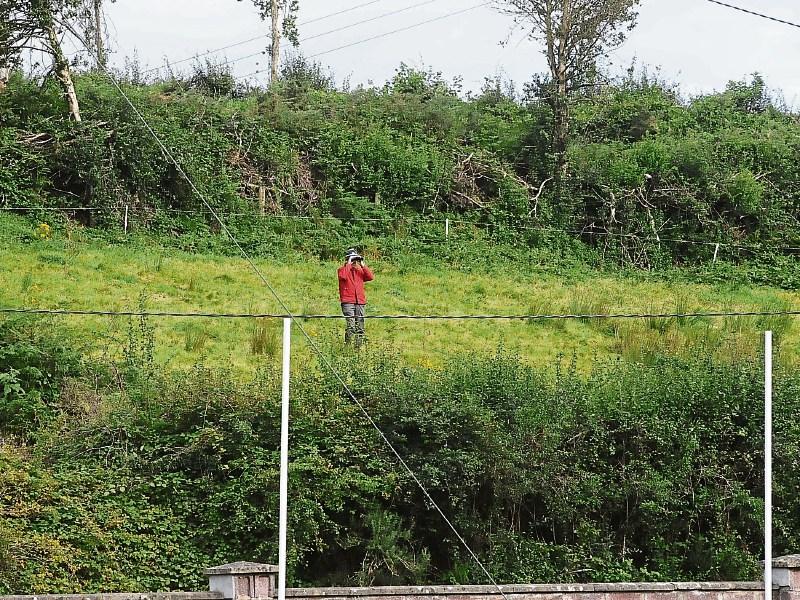 Best view in the house - an intrepid fan uses binoculars to watch the action in Cloone last Saturday evening at the Intermediate Relegation playoff between Kiltubrid and Eslin Picture: Willie Donnella

We almost had a bit of history last weekend only for Glencar/ Manorhamilton's wily warriors to throw a spanner in the works with a typically composed and superb dismantling of Ballinamore Sean O'Heslins in the final game of the weekend.

Up to that point, we had the almost unique situation that all five teams who won at Intermediate level came from the one group while the four victors in the Senior grade also came from the so-called Group of Death - all we waited on was the expected Ballinamore victory and we could run our “Group of Death becomes Group of Life” headlines.

But while they mightn't have been favourites and the consensus around the county was their reign would come to an end on Sunday, you just can't underestimate the defending champions when it comes to knockout football.

Yet I'm not sure we can call it a major shock all the same for, in our preview last week and I'm not claiming to be Nostradamus or even the weather guru from Donegal, we wrote of Ballinamore that “their reliance on Wayne McKeon's spectacular freetaking could be a problem if they meet a disciplined defence. There is a feeling that Manor haven't been hitting top form so far and if that is the case, I'd take Ballinamore to advance here.”

Well, Sean Boylan's men hit top form, their best of the season so far, and if the performance lacked the high scoring and free-flowing action of the other quarter-finals, I'd recall the words of USA Basketball Dream Team coach Chuck Daly who pointed out “Attacks win games, defences win championships!”

Was there a defensive performance as impressive as what Glencar/Manor produced last Sunday to tie up Ballinamore's attacks in knots? Granted they looked in real trouble early on but they weathered the storm and at the end, it was Ballinamore who were caught up in blind alleys and the Manor men flying up the field for some wonderful scores.

Hard to bet against them for the rest of the championship and that is even with Mohill's awesome display of power and pace last Saturday and the rapid emergence of both Fenagh St Caillin's and St Mary's Kiltoghert as genuine title contenders with momentum at their back.

Other than Glencar/Manor messing up our predictions, the so-called Group of Deaths proved more to be Groups of Life as St Mary's, Fenagh St Caillin's and Mohill all made it to the semi-finals and Aughawillan obliterated neighbours Drumreilly in the relegation playoff, reinforcing a feeling that group 1 was much tougher and better preparation for knockout football than group 2.

Incredibly the trend was duplicated in the Intermediate grade where all five teams who battled each other in Group 2 emerged victorious in their knockout battles.

The big shock was the defeat of last year's finalists and group 1 winners Drumkeerin to a Carrigallen team who qualified for the quarter-finals by winning a winner takes all clash with Kiltubrid but that's the beauty of the intermediate grade, there is always one team that upsets the apple cart.

Describing their win as a “shock” raised the ire of some Carrigallen supporters who, in the very act of complaining to me, termed themselves as underdogs so you really can't win.

Predicting results is nothing personal and it's far from an exact science and please remember, its nothing more than an opinion. We don't know for certain what is going on in each camp, who is injured, who is going well - it's just an opinion and certainly nothing personal - all I want is a good game!

It's a bit like people actually blaming Willie Donnellan for the Government's ban on spectators attending sporting events thanks to the galleries of his excellent photos we've been publishing - their logic somehow like being asked to add two and two together and answering “bananas”.

Now, Willie knows a lot of people and a lot of people know Willie but I'm not sure what sort of pull he has with NPHET and you've got to wonder if the Government are basing their public health policy on photos that appear in the pages of the Leitrim Observer or online at www.leitrimobserver.ie.

As you can see from our photos from last weekend's games, fans risk life and limb climbing walls, crossing fields and even using binoculars to watch the action from a nearby hill in Cloone as we've saw last Sunday so maybe publishing a few photos of fans at a game isn't the cause of the end of western civilisation after all.

Any way, we rarely get told we got it right when it comes to predictions but looking at last week's games, we didn't do too bad. Mohill, Gortletteragh, Annaduff and Dromahair all won as we guessed, if you want to put it that way. We felt there was a shock on the cards for St Mary's, we hedged our bets with Fenagh St Caillin's, feeling if a fully fit Leitrim Gaels were at full tilt they would win but otherwise Fenagh would do it.

We went for Ballinamore but as we've said previously, we had a few nagging doubts and we got it wrong with Carrigallen but that was a close one-point game that could have gone either way.

In any case, we're not claiming any prizes for getting it right just as we don't shout about it when we're wrong - we'll leave that to everyone else!

We carried a fascinating interview with GOD, as he is known in athletics circles locally and nationally, back in July when the lockdown from sport was finally easing and Gerard spoke of the challenges of training on public roads, without equipment and training partners.

It seems the hardship did the Carrick AC hurdler little harm, running his fastest time since 2018 in what turns out to be his one and only race outdoors for the year.

Congrats Gerard on a truly remarkable performance after a truly strange Summer!

PPS - I'd forget my head only its tied on sometimes but it would be remiss of me not to mention the wonderful online coverage of the Connacht Gold Senior Championship, broadcast by Brendan Doyle and his team. As one of the fortunate few to be at matches, I didn't get to see the games online but from what I've heard, there has only been the height of praise for the streaming, both in terms of quality and content.

From just a quick chat with Brendan, it appears that somewhere around 9,000 people subscribed over the weekend making it an outstanding success.

Again, praise is often in short supply for officials when they make the decision so take a bow Leitrim County Board and take a bigger bow John Lynch, Martin McGowan, Brendan Doyle and everybody behind the scenes.