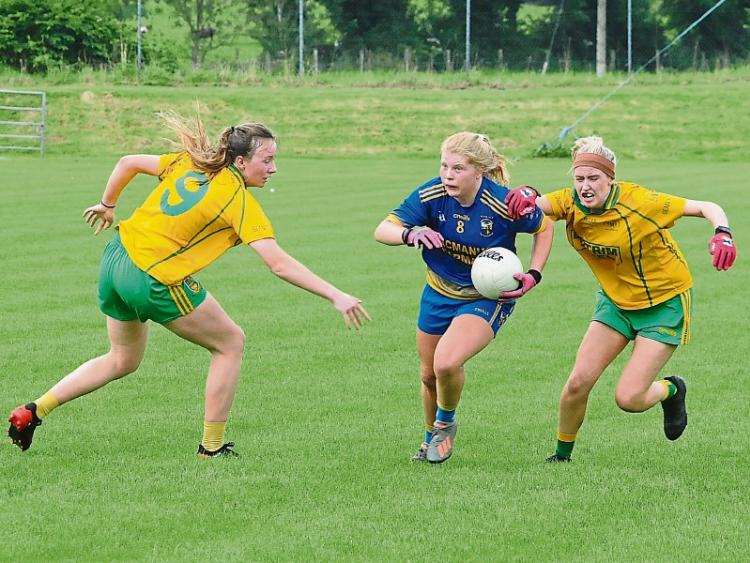 One way or the other, next Sunday's Gotham Dry Wall New York Leitrim Ladies Senior Championship Final will see history created as a team wins the title for the first time but will it be a Glencar/Manorhamilton team appearing in their third final in a row or surprise packets Ballinamore Sean O'Heslins who are celebrating next Sunday evening?

It's a tough question to answer for even though Ballinamore beat the north Leitrim women in the group stages, an epic encounter that saw Conor Harte's team twice recover from six point deficits to actually win by four points, Pauric Corrigan's Glencar/Manor are probably going to start as the hottest of favourites!

That 4-12 to 1-17 encounter in Ballinamore showcased the very best of the ladies game but immediately after it, Corrigan warned everyone to watch his team over the coming weeks and he was true to his word as Manor finally got the better of St Joseph's in the semi-final.

Two ferociously hard battles with the three-in-a-row champions are the perfect preparation for next Sunday's final and in those games, Manor showed just how to absorb the lessons from one game to ensure victory the next day.

Manor knew they gave too much space to St Joseph's forwards and closed the space down immensely for the second day and if they look back on their clash with Ballinamore, they will see some problems that have to be remedied pretty quickly if they finally want to get their hands on the title.

First of all, stopping the O'Dowd sisters, all three of them, will be key to Glencar/ Manor's gameplan and while that might be easier said that done, the job they did on St Joseph's Aine & Michelle Heslin showed they can do that.

Now, Ballinamore definitely have more pace and stopping the pulsating runs of Laura O'Dowd is either going to take something special, or maybe a bit more negative in not allowing O'Dowd to get started at all.

Organisationally and motivationally, Glencar/ Manor are probably that bit ahead of Ballinamore in terms of development. A third final on the trot means that they are unlikely to be phased by the big time while a lot of big game experience with St Clare's CS in particular means they know how to stifle an opposition.

That they have the tools to do that is evident for they can withdraw three players from attack and still leave Muireann Devaney, Ailbhe Clancy and Leah Fox upfront and all three revel in space. As they showed against St Joseph's, long balls over the top are exploited to deadly effect.

But Ballinamore didn't fall into that trap the first day and looking at their outings so far, what really stands out is their defensive discipline and refusal to get pulled out of shape. They might buckle and bend a bit under pressure but coughing up goal chances is not in their nature.

The hard running O'Dowds attract the headlines but look beyond that and you see a disciplined, tough and mobile back six that seems to be growing in confidence with each and every game.

Kirby Gilgunn, Leanne McGrath, Abbi Sweeney have stood out and their workrate is exceptional while they have the likes of Emma Honeyman to come on.

Upfront, Emma McGovern leads the charge at full-forward and every team would like a combative, hard working forward like her as she harries, hassles and pounces on every ball. If they get a few more scores from Niamh Donohue and Mollie Murphy, Ballinamore have a real scoring threat.

Ballinamore's biggest enigma or ace-in-the-hole is Roisin McHugh - the county player could be huge anywhere they place her but with her pace, willingness to track back and ability to grab a score, centre-forward means she can really get involved with the play.

You wonder if Ballinamore have surprised themselves with their progress this year but what seems to be important is that a young team is growing with confidence and ambition with each and every outing.

From their draw with St Joseph's where they struck early with three first half goals and then had their backs to the wall to hold out, there was a definite improvement for their next outing against Glencar/ Manor, a definite sense of growing belief.

That victory over Manor in the group stages is key here for Ballinamore won't go into the final the way most first timers do, thinking they are up against it. They know what it takes to beat Glencar/ Manor and it is going to take a monumental effort, but such has been their game on game improvement that Ballinamore are a real live serious threat.

So who has the most pressure on them? Probably Glencar/Manorhamilton for they are favourites and have been the coming team in Leitrim football for a few years now. You sense that once they make the breakthrough, they can dominate for years to come but making that vital, first breakthrough is the big one.

In a way, both teams came through tough semi-finals that will serve them well. Glencar/Manor got the tough test we expected from St Joseph's and came through it well but Ballinamore showed they could battle too when Kiltubrid threatened to derail their dreams. For a young team, that is a very impressive feat!

Ballinamore will go into the final with all the innocence and brash confidence of underdogs who don't feel like underdogs. They've beaten Manor, know how hard it is but nearly everyone is expecting the north Leitrim women to emerge victorious.

I get the feeling that we won't have the shootout that we had from the group game. Glencar/Manor have shown they can close down a game and hit on the break but Ballinamore's speed poses a very different challenge to the strength of St Joseph's.

Glencar/Manor have shown they know how to win at every other level so far and their desire to lift the Cup means they will go the extra inch, yard or mile next Sunday. That could prove vital but don't rule out Ballinamore - if they get a run on Manor stopping them will be almost impossible. You choose!