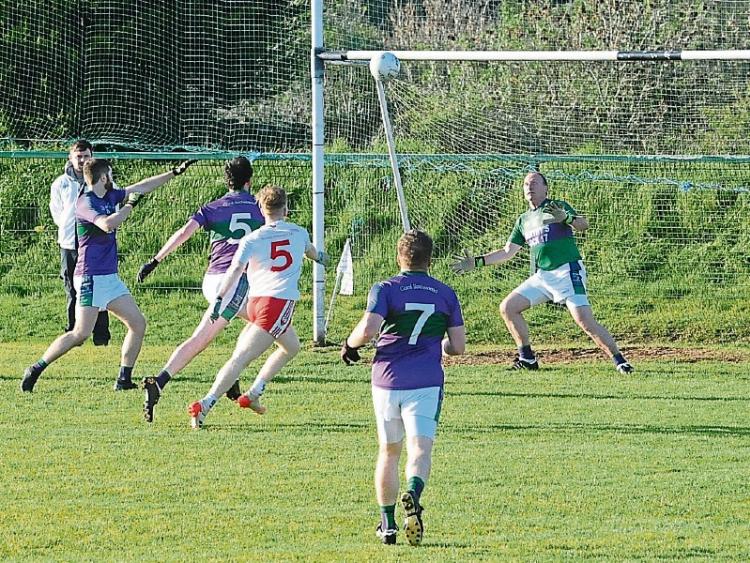 Three unanswered points in the final minutes of an intriguing Vistamed Junior A Championship Final was enough for Leitrim Gaels to take victory over a dogged St Patrick's Dromahair in Shane McGettigan Park, Drumshanbo last Saturday.

In what might be the last piece of silverware handed out by Leitrim GAA this season, the Gaels produced a strong final quarter to eventually overcome the challenge of a Dromahair side who took the game to the favourites and could have been much further ahead with more composed finishing.

Yet even for all that, there was no denying that Leitrim Gaels were the stronger team physically as they finished the game much stronger than their Dromahair opponents, driving on in the final quarter only for some poor wides to rob them of the reward they deserved.

Leitrim Gaels set off at a tremendous pace and looked as if they would blitz Dromahair with three points, two wides and a rocking crossbar in the first ten minutes. Brian Treacy put over a four minute free and then crashed a powerful shot off the Dromahair crossbar as he raced through unopposed a minute later.

A nice point on the turn from Gilroy was boosted by a good Shane Finn point and Leitrim Gaels were looking good. But Dromahair suddenly started to get a foothold in the game, Mark McGee showing good persistence to point after a move broke down on 11 minutes.

A minute later, Cian Forde’s excellent 40 yard flew over the Gaels bar and now there was just a point in it. Dromahair really showed have surged ahead with four bad wides which were punished when Finn added a second point on 19 minutes.

But with ten minutes left in the half, the game was thrown back in the melting pot as Mark McGee broke the line at pace to take a flat pass in front of him from James Clancy. There was no stopping McGee as he burst through and his shot from about 20 yards out saw him dip his shot over the outstretched arms of Mark Chandler and into the net.

There was no more score for the rest of the half but Dromahair did suffer a big blow when Clancy went off with an injured ankle, Dromahair leading 1-2 to 0-4 at the break.

Leitrim Gaels made three changes at the break but it was Dromahair who made the better start with two massive long range frees from Keith Conlon after five and six minutes.

Leitrim Gaels weren’t about to lie down and within the space of 120 seconds, they fired over three rapid quick fire points to draw level. Shane Finn scored a nice point on the turn before Michael McManus burst through to score and then Donal Moreton took a great pass from Finn to tie the scores up.

Neither side could manage a score until the 14th minute when a Michael McManus foul on Keith Conlon saw the Dromahair freetaker convert to put his side back in front. McManus made amends for his foul with a long range free of his own on 48 minutes .

Both teams missed chances but when Michael McManus edged Leitrim Gaels in front with less than eight minutes to go, the writing was on the wall for Dromahair, even if they hit back five minutes later with a 40 yard Conlon free.

The trouble was Leitrim Gaels were winning all the possession and only poor finishing stopped them from killing off the game. But after Conlon levelled the scores, Brian Treacy got on the end of three good moves, finishing clinically to ensure the title for Leitrim Gaels.