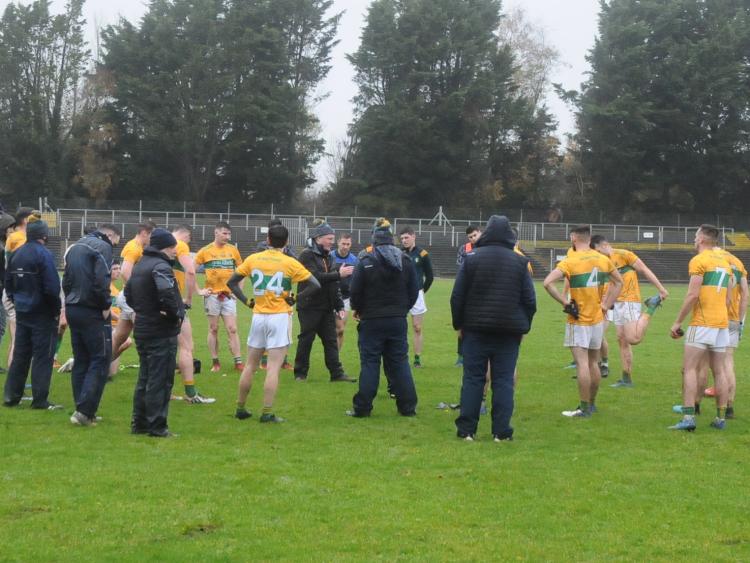 With the news that Terry Hyland will take some time to consider his future as manager with the Green & Gold, three Leitrim players have urged the Cavan man to stay on with Leitrim for at least another year.

Speaking after Sunday’s 2-15 to 0-10 loss to Mayo in the Connacht Senior Championship in Avantcard Pairc Sean Mac Diarmada, Terry Hyland told the Observer that he would take time to consider his future and would hold talks with the County Board (See story HERE).

That led to players Evan Sweeney, Shane Quinn and Keith Beirne urging their manager to stay on for at least another year to win promotion back out of Division 4.

Mohill’s Shane Quinn said “It would be really great if they stayed on and we build on again. You can’t be having a manager for two years and then getting so far and going back to the drawing board. We need to stick together.

Shane, scorer of Leitrim’s first point against Mayo, also highlighted the work done behind the scenes by Terry and his management team: ““Terry will tell you nothing until it is time to tell, he’ll hold his cards close to his chest but the management team there have done serious work there.

“If we give them a bit more commitment over the Covid, it could have been a different story, they are putting in serious work and we just have to match them.”

Glencar/Manorhamilton’s Evan Sweeney believed it was too early to be making big decisions with the disappointment of the loss to Mayo still fresh but stressed the bond Hyland had forged within the team.

“It is early days at the moment, it is just disappointment at the moment,” reflected Evan, “We’ve all come together the last few years, there is a really core group there and he has really brought us on. We would love to push on with him but that is out of our hands and we will have to see.”

Top scorer Keith Beirne was in no doubt that losing Hyland would be a major blow to Letirim’s ambitions over the coming months: “As a group, we’re hoping that Terry stays on. If Terry stays on this group stays together, we can hit the gym soon, get back going again and aim for promotion in the League in the spring.

“We need him staying on to keep the group together and get us going. If we lose a manager now, we’re going to be two months in limbo and starting from scratch again.”