Leitrim face Louth in the Lidl Ladies NFL Division 4 Final in St Tiernach's Park in Clones on Sunday, June 27, and Clare Owens tells John Connolly that she is really looking forward to the occasion 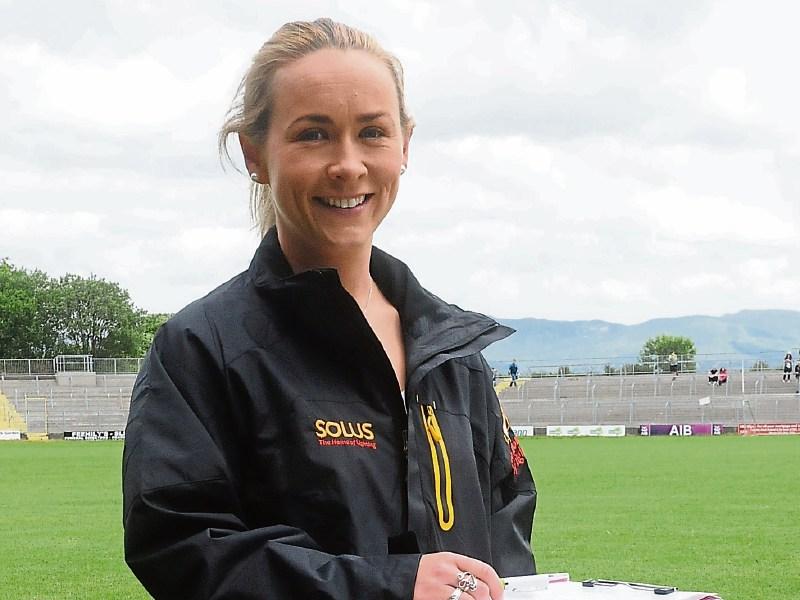 If there is one message Clare Owens will impart to her teammates ahead of Saturday’s Lidl Ladies NFL Division 4 Final against Louth, it is to savour the occasion because you never know when the opportunity will come around again!

Starting off with the observation that reaching a final was a special occasion for Leitrim, Clare was in full agreement: “I’ve only played in two, won one and lost one and I’m playing a while so that’s not a regular occurrence.”

Enjoying the occasion, enjoying the build-up and enjoying the chance to play in a national final is something Clare will urge her teammates to embrace: “I’m a big believer in life in general that you have to enjoy it. Of course it is just a match regardless of what is at stake but at the same time, you want to enjoy the build up over the last two weeks and then once next week comes around, it will be back to normal.

“I try to enjoy the atmosphere and the build-up to it and, as you said, it doesn’t come around very often so you don’t want to let it pass you by.”

The danger, however, lies in getting the mental balance right for Sunday’s Final, the constant battle in high performance sport of not allowing yourself to become overwhelmed so much by the occasion that you simply don’t perform.

So how does Clare approach a big occasion like Sunday’s clash with Louth: “It is a bit of both - focussing on the game and over the last two weeks, just enjoying the build up. Like everyone says, it is just a game, it is just another 60 minutes, you could do the same at training.

“But the opportunity to play Division 3 football - I’d love to see that for Ladies football in Leitrim in general, regardless of who is involved, so obviously there is an added incentive but it is really just another game of football. Once you get on the pitch and the ball is thrown in, you’re not thinking that it is a League Final because every time you go out to play, you want to win.”

A long career with the County Ladies has taught Clare not to read too much into Leitrim’s 3-14 to 3-6 victory over Louth in the first round of the League: “That result was even better than we expected ourselves. Eight points, I don’t think there was an eight point difference and just watching Louth since then, they’ve very much improved over the last few weeks and hopefully we have too.

“We had a battle royale last year in Louth and I’d be expecting more of the same on Sunday. They felt like they underperformed that day in Ballinamore, which they probably did.”

Kate Flood didn’t play that day and while Clare agrees the Aussie Rules star is a huge asset to Louth, Leitrim won’t be concentrating on one player: “She is a big player and they probably did miss her that day in Ballinamore, she is back in the fold since and she is hugely talented so I’d prefer to play with a girl like that rather than see her sitting on the bench.

“I’m sure they are delighted to have her back, they’ll probably feel like it is their ace up their sleeve that they didn’t have in Ballinamore but it is a 15 plus game these days, the panel plays a massive part and Louth have plenty of other players too that need watching.

“I’d imagine she’d be a boost for them but we’re probably not going to focus too much on her because we knew the threat they bring otherwise.”

One of the interesting little asides from the win over Limerick was manager Hugh Donnelly ripping into his players for letting their performance levels drop in the second half in Milltown. It is quickly obvious that Donnelly’s captain is of a similar mindset!

“It was good that we had such a cushion on the scoreboard because we really let ourselves down in that last quarter. It wasn’t a surprise that he wasn’t happy, we weren’t happy either. I suppose it is strange when you win by a good margin to not be happy but again, I think it is important not just to settle, we would like to put a more complete performance together. We obviously still have a lot to work on.”

Yet there is no denying that Leitrim have improved dramatically under Donnelly’s tutelage but if victory does not come next Sunday in Clones, it won’t change Clare’s opinion that Leitrim are moving in the right direction: “Regardless of the results this year, success can come in many forms and, apart from results, I definitely think this year has been hugely successful so far in terms of structures in place and girls know their roles and know what they’re doing.

“We’ve won the matches but that has been part of the process and the progress we’ve been making. Obviously, lovely to get the results but I’ve been around for a while and I definitely can see a huge improvement in the way we’re approaching things, how organised we are - it’s been brilliant and to me, that has been a success, regardless of results.”

One added factor next Sunday could be the return of fans, albeit in very small numbers, and Clare admits they have been missed and hopes the Leitrim supporters can help them to victory: “There are loads of elements to that: It is nice to have people there, just to hear a friendly or familiar voice, a roar of encouragement from the crowd is brilliant but also there is a strange feeling, the same with the club last year, heading off to a match and nobody being able to come.

“It is usually such a community thing, it is usually such a collective effort so I’m delighted that people are allowed to come to the match if they want. I know that numbers are still pretty limited but it is nice to get that chance and share that experience with people who have been Leitrim fans forever.

“It definitely helps and in a tighter match, it can often mean the difference, whose supporters shout the loudest so whoever gets to travel to Clones on Sunday, we’ll be definitely looking to them for that extra edge whenever we need it.”

As for a verdict, Clare believes Louth will be brimming with motivation even if she believes Leitrim can complete the job: “Every team goes in confident of victory. I actually have a strange feeling that Louth will feel they left it behind them in Ballinamore and this is written in the stars that they were beaten in Ballinamore and they will come and defeat Leitrim in the League Final.

“Expecting to win? I don’t know to be honest - I have a feeling that Louth were probably more confident leaving Ballinamore than we were. I’m delighted that we are in the final because I really hope and think it will be a very competitive match and there won’t be much in it either way.”