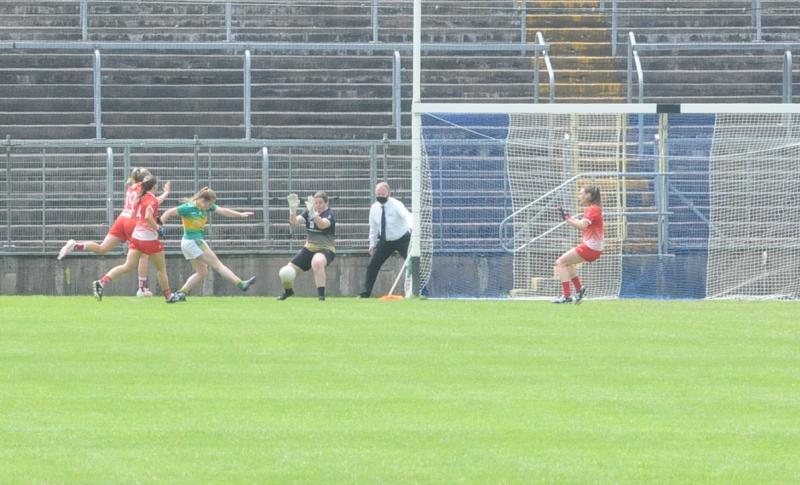 Leitrim’s dream of glory in this year’s Lidl Ladies NFL Division 4 Final were shattered in brutal fashion in a sun-drenched St Tiernach’s Park Clones on Sunday as goal-hungry Louth found the net four times in the first half to lay the foundations for victory.

In many ways, Sunday’s Final was a tale of the first and last nine minutes - the first nine minutes saw Louth punch huge holes in the Leitrim rearguard as they plundered three goals to set up their deserved victory.

The final nine minutes, after Leitrim converted a penalty, finally saw the Green & Gold play as they have been during the League - with pace, with aggression and real intent as they cut an eight point lead in half and saw two goal chances saved.

It left Leitrim fans with the dreaded yet all too familiar feeling of “what if” - what if they had converted those two late chances, what if they had performed the way they had in their previous outings but you have to say that Louth were the better team on the day. 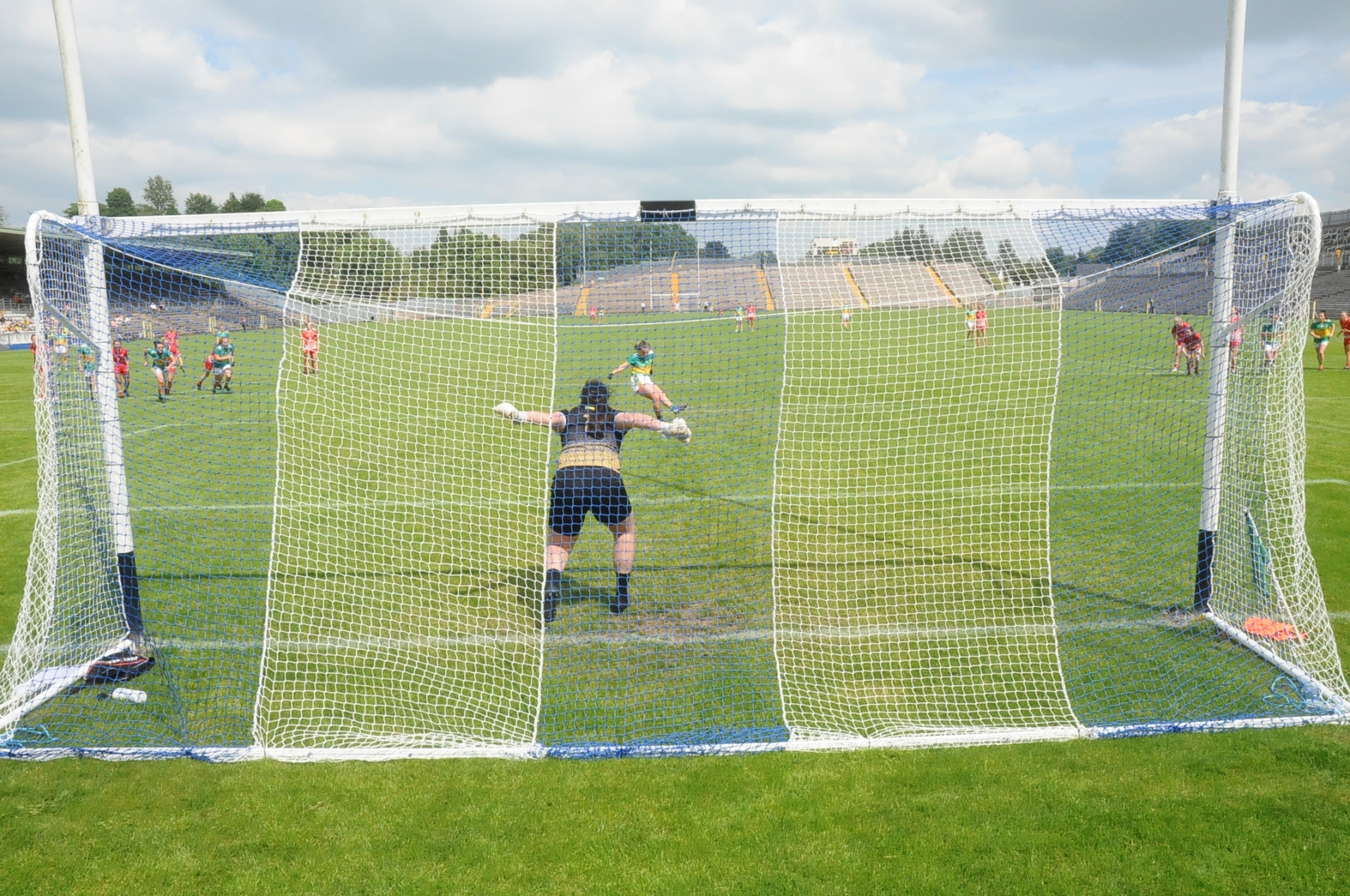 Louth targeted the Leitrim defence, isolating defenders and attacking at paces and the Green & Gold never truly got to grips with it throughout the game, thankful for some bad Louth misses and heroic last ditch defending at times.

It didn’t help either that two of Louth’s four goals came off turning over the Leitrim kickout as twice Michelle Monaghan saw restarts intercepted and returned with interest as Louth put the ball in the net.

An underperforming Leitrim were clearly rattled by goals from Lauren Boyle and Player of the Match Niamh Rice in the opening three minutes and when Rice added a third inside the first ten minutes, the writing was on the wall for Hugh Donnelly’s side.

Leitrim had beaten Louth by eight points in a tempestuous game in Ballinamore in the opening round of the League but it was clear that Louth manager Wayne Freeman had learned the lessons of that game well, not allowing Leitrim to build up a head of steam and attacking isolated Leitrim defenders with sheer pace.

Indeed, were it not for some bad misses from the Louth women, they could have been out of sight by the time the first half ended. Instead, they ended it with a seven point lead and they managed most of the second half comfortably, matching Leitrim score for score to earn promotion to Division 3 for next year.

The loss is a massive blow for Leitrim but they must park their disappointment rather quickly for they face neighbours Fermanagh in the opening round of the TG4 Intermediate Championship on July 10. 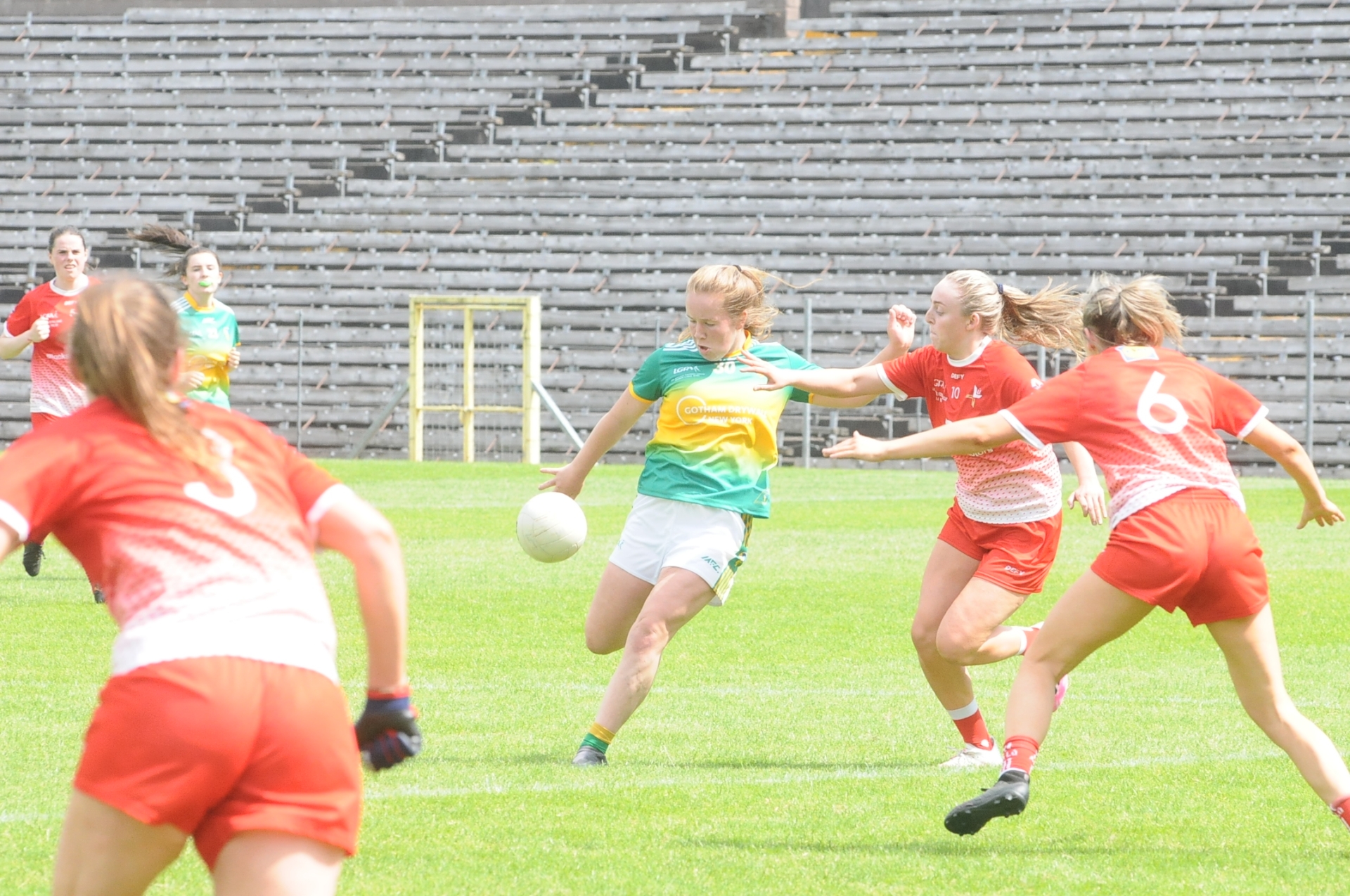 Leitrim got an early warning of what was to come as Player of the Match Niamh Rice shot wide after just 15 seconds. But from the kickout, disaster struck as Aussie Rules star Kate Flood intercepted a poor Michelle Monaghan kickout and sent Lauren Boyle through for a goal in the first minute.

Louth immediately added a point from Aine Breen from distance and Leitrim’s horror start got worse when a patient move ended with a ball into space for the flying Rice who gave Monaghan no chance for a second Louth after just over three minutes play.

Leitrim tried to hit back, Michelle Guckian’s long pass over the top just evading the grasp of Bronagh O’Rourke as the Green & Gold sought to settle after their traumatic opening. Rice added a point to leave Louth eight clear after just five minutes but Michell Guckian (free) and Laura O’Dowd, with a great effort on the run, hit back.

But then came another hammer blow as a huge kickout from Louth keeper Una Pearson bypassed the Leitrim press completely, leaving an unmarked Aine Breen to charge forward before her perceptive pass freed the speedy Rice to bury the ball in the net.

Guckian and Leah Fox both scored good points before the water break but you couldn’t help but think Leitrim had to be shell-shocked as they trailed 3-2 to 0-4 as they talked to their manager. 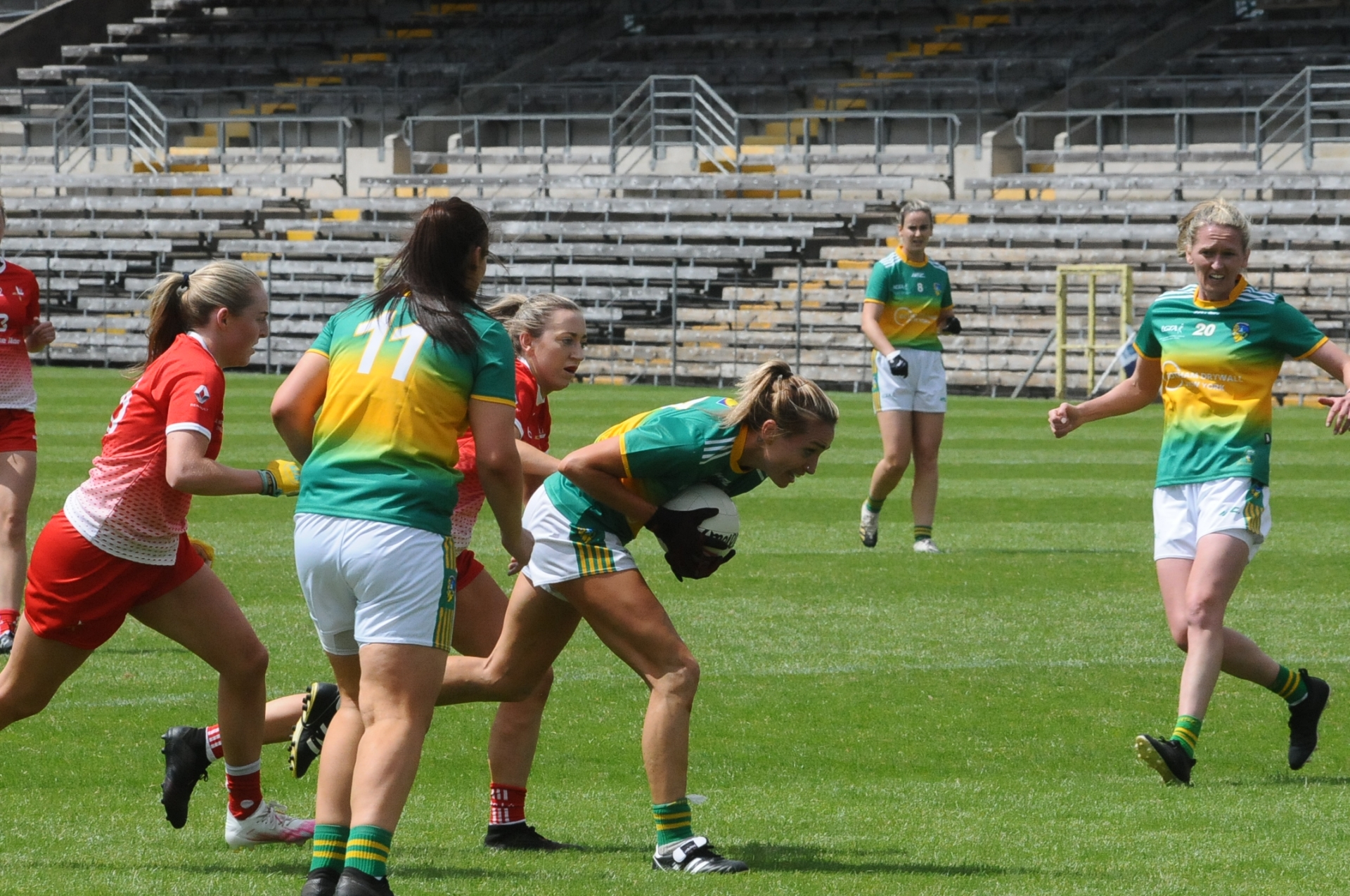 Louth had a couple of bad misses before Bronagh O’Rourke and Laura O’Dowd, two excellent scores, narrowed the gap somewhat. Louth continued to miss what seemed easy chances but that didn’t seem to matter as another kickout was intercepted by Lauren Boyle.

She charged forward and fed Flood whose first shot was blocked but the influential half-forward rifled home the rebound to deliver a huge blow to Hugh Donnelly’s team.

Guckian hit a good free after a foul on Leah Fox but it was Louth dictating play, even if they were hitting poor wides, although Leitrim had a huge let-off when Boyle won an old-fashioned cross into the area and fed Denise McKenna who drove her shot too high and over the bar with the goal at her mercy.

Ailish Cornyn thumped a long range shot over the bar for Leitrim’s final score of the half as Glencar/Manorhamilton duo Ailbhe Clancy and Muireann Devaney had already being brought on at the expense of Roisin McHugh and Bronagh O’Rourke.

Louth led 4-3 to 0-8 at the break and Leitrim hoped that Muireann Devaney’s early point after a long Clancy run would kick-start a revival but Louth seemed to have an answer to every Leitrim score, Rice scoring after good work from Lauren Boyle.

Michelle Guckian converted a close range free but Rebecca Carr fired over on six minutes. Devaney, under pressure, dragged a shot across the face of the Louth goal but a quickly taken free led to a good point from Laura O’Dowd.

But Louth looked as if they had weathered the storm when Denise McKenna (free) and sub Eimear Byrne landed points just after the water break to leave them eight points clear with just over 12 minutes to play.

Guckian swapped points with Lauren Boyle and the impressive Louth full-forward should have wrapped up the game as a contest when she broke through but blazed wide with only keeper Michelle Monaghan to beat.

That miss could have proved crucial as in the very next attack Leitrim fashioned a goal chance, Michelle Guckian winning a high ball but hammering her shot off the post only for Louth’s Aoife Russell to be penalised for colliding with Muireann Devaney as both battled for the rebound.

Referee Lorraine O’Sullivan consulted with her umpires and then pointed to spot, Ailbhe Clancy driving straight to the net to leave five points between the teams. 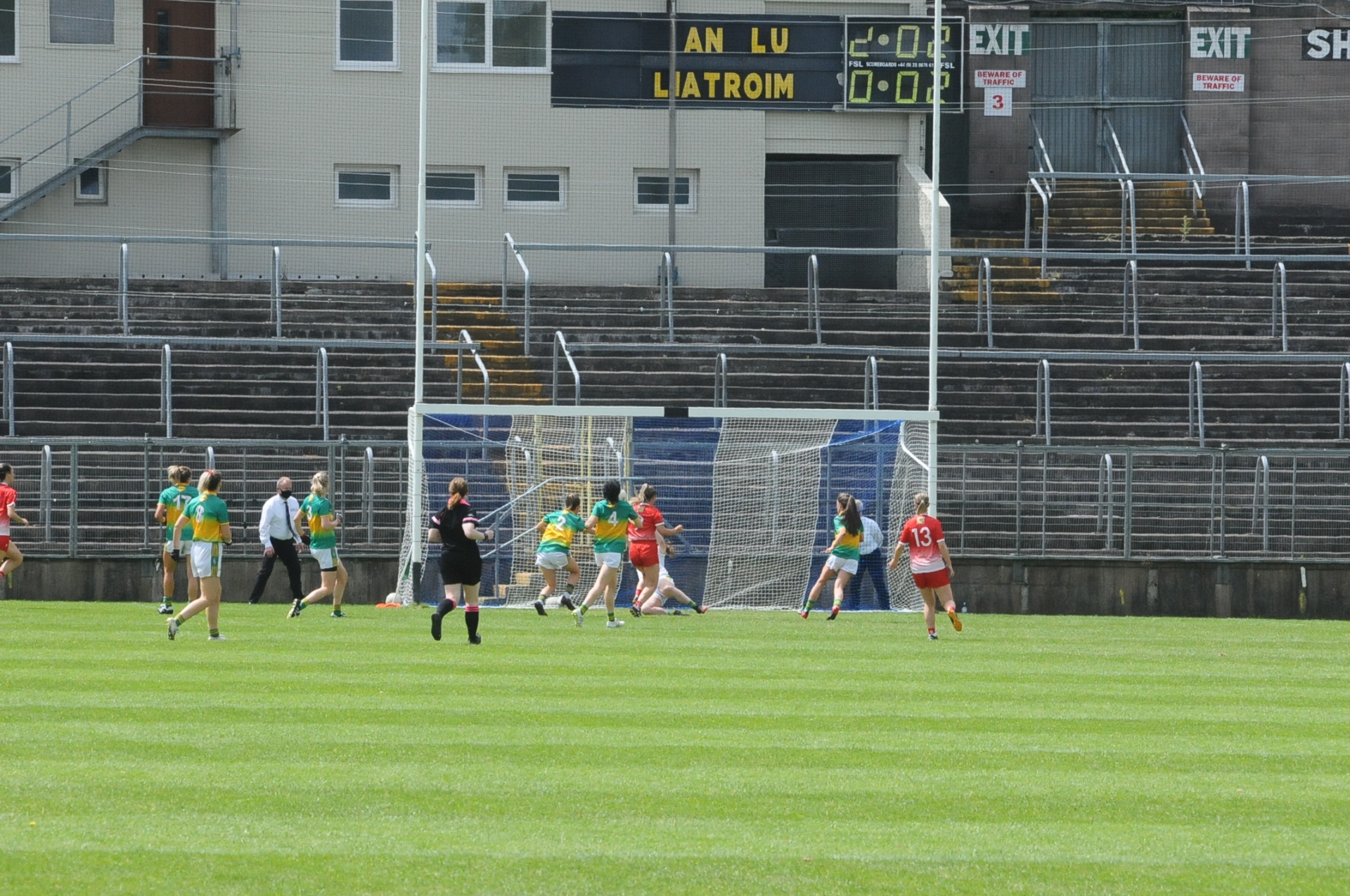 A great run from Devaney saw the Manor woman fire over but Louth hit back immediately with a good Rice point five minutes from time. But Leitrim were now playing like women possessed as the goal finally seemed to wake them up.

A high ball found Guckian and after she shrugged off her markers, the Leitrim full-forward seemed destined to find the net only for keeper Una Pearson to make a wonderful save, diverting the ball out for 50.

Guckian did add a final point to Letirim’s tally and Leitrim kept battling in search of an improbable comeback, Muireann Devaney breaking through only to see her shot deflected but still head towards the net only for Pearson to stick out her leg to make a great save.

Ailbhe Clancy had one last chance but with four points between the teams, time was the greatest enemy and Louth held out comfortably for the victory.

SEE THIS WEEK'S LEITRIM OBSERVER AND WWW.LEITRIMOBSERVER.IE FOR REACTION & ANALYSIS