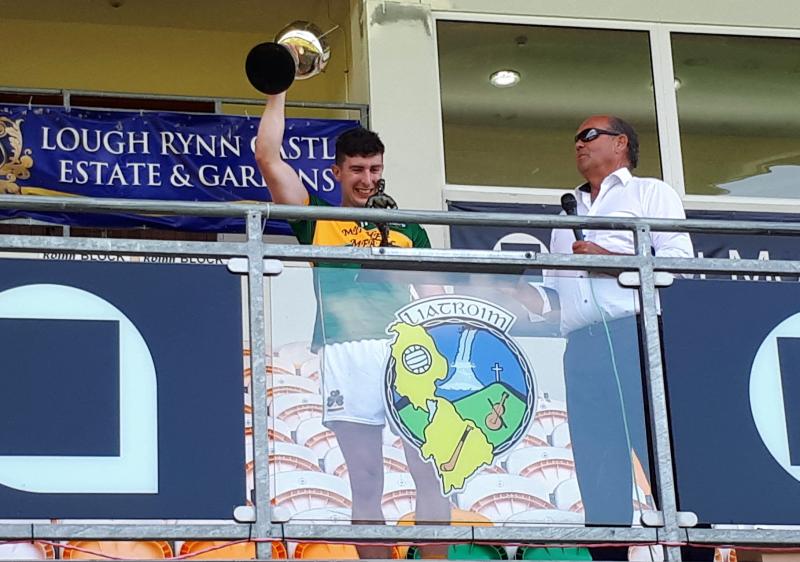 He may have started with a missed goal effort and ended the game early with injury but Jack Heslin certainly played a captain’s part as he plundered three goals to lead Gortletteragh to victory over a battling Annaduff in the 2020 Smith Monumentals Intermediate FC Final in Avant Money Pairc Sean Mac Diarmada on Sunday.

Goals were the story of the game and nobody played a bigger part than Heslin, the Gortletteragh man finding the net three times and unlucky not to add two more as Gortletteragh’s power around the middle of the field and pace through the centre proved too strong for Annaduff.

Annaduff really took this game to the favourites but just couldn’t match their physical power - the loss of County star Conor Reynolds, who suffered a broken hand against Mayo, was compounded when the excellent Eoin Gill had to go off before halftime and Annaduff simply couldn’t afford those losses.

Mayo blow Galway away in second half to retain Connacht title

It didn’t help either that Annaduff couldn’t match Gortletteragh for scoring efficiency. Both sides had their share of bad wides but Annaduff missed some crucial frees at a time they desperately needed them while Gortletteragh were able to pounce for goals.

In truth, Gortletteragh could have had another three goals were they that bit more clinical as their hard running through the centre, particularly in the form of Heslin and Niall Woods, tore huge holes in the Annaduff defence that probably should have reaped more reward.

Ray Cox caused Gortletteragh’s defence no end of bother but the Annaduff man was often too isolated, lacking the support that saw Cathal McCrann create two goals for Heslin and Gallagher and keep the Annaduff defence guessing.

Woods was very close to man of the match - Kenny Cox burned him once or twice early on but Woods grew into the game, his physical power and ability to get around the field on a blistering hot day giving Gortletteragh a massive advantage in the battle for possession.

Though disappointment is no doubt strong in Annaduff right now, they too can look forward to the future with a good deal of confidence. There has been a huge turnover since they reached the final in 2017 but a new, young team has emerged and they look set to push on over the next few years.

Their problem may be in replacing the evergreen Ray Cox who proved he is just as good as any forward in the county with the right supply. Get someone to take the burden off the former County man and Annaduff will be very hard stopped in the 2021 Intermediate campaign.

Annaduff started brightly, Kenny Cox firing over after a poor Niall Tiernan kickout but they also had wides from Sean Duignan and Dillon Keane. Jack Heslin should have found the net with Gortletteragh’s first attack as his brilliant run cut through the Annaduff defence but he blasted wide.

Niall Woods almost broke through for a goal after a bad kickout from Annaduff, a one-two with Cathal McCrann but his shot was deflected out for a fifty which the Gortletteragh midfielder hammered high over the bar on six minutes.

John Reynolds had a bad wide and Cathal McCrann was also off target but all that was forgotten on eight minutes when Jack Heslin surged through the Annaduff defence. His pass found Cathal McCrann unmarked at the far post but his palmed effort went across the face of the goal only for Heslin to follow in and ram the ball to the net.

Francis Flynn followed up with a good point as it seemed as if Gortletteragh were taking control but Annaduff responded brilliantly, Sean McNabola firing over a good free after Eoin Gill was somewhat fortunate to win a free after he appeared to jump into a challenge as much as he was fouled.

Sloppiness cost Gortletteragh a point when they were penalised for having a defender inside the D for a kickout, McNabola converting but the Annaduff man shot wide after a short fifty routine on 14 minutes.

However, McNabola’s next delivery would have a much bigger impact as veteran Ray Cox made a wonderful catch, rounded the defender and drove the ball to the Gortletteragh net for a wonderful goal.

Dillon Keane followed up with a wide while an interception as Annaduff attack ended with the rampaging Niall Woods charging through, playing a one-two and firing over the bar to tie the scores on 17 minutes.

Annaduff edged back in front with a McNabola free after a foul on Kenny Cox and another good Ray Cox point, a huge sideline ball from McNabola seeing the inside forward fielding under pressure from the keeper to score on 21 minutes.

Francis Flynn saw a shot blocked but then tapped over the free before Niall Woods used every ounce of his strength to plough through a helpless Eoin Gill and turn the ball over. He charged forward before offloading to Jack Heslin and this time, the Gortletteragh man made no mistake with a fabulous finish.

Heslin almost inadvertently had a hat-trick when his point attempt dropped short a minute later but Annaduff keeper Sean Gallagher did superbly to claw the ball away from the top corner.

Alan Glancy then fired over one of those points that is the bane of umpires - initially it appeared to be going wide but it clearly wobbled back and from this observer’s vantage point, it looked good. Initially it was waved wide by the umpires but linesman Seamus Mulhearn, behind the shot, informed referee Enda Egan it was a score so the white flag was raised.

Glancy put a shot narrowly after that as Gortletteragh led 2-5 to 1-6 before both teams got a welcome break after an entertaining and competitive first half.

Annaduff should have wiped out the Gortletteragh lead but Sean McNabola and Kenny Cox both hit wides inside the first 60 seconds and they were made pay a brutal price when Gortletteragh goaled in the next minute.

A sideline ball was sent in high where it was brilliantly fielded by Cathal McCrann on the edge of the square. A clever offload found Padraig Gallagher on the loop and he rounded defender and keeper to blast the ball to the net.

Annaduff’s composure seemed to leave them for a while, Ray Cox putting a mark wide before Francis Flynn converted a free on four minutes. From that kickout, Gortletteragh killed the game as the ball flew straight to Keoghan McGovern - his brilliant pass just evaded the grasp of sub Conor Reynolds who seemed to be charging through on goal.

But unfortunately for Annaduff, Jack Heslin was coming at speed behind him and he gathered and blasted to the net in one smooth motion to leave nine points between the teams just four minutes into the second half.

Annaduff tried to respond with Sean McNabola doing incredibly well to break through but the distance he shot from gave Niall Tiernan lots of time to safely stop his shot. Annaduff manager Joe Cox also replaced keeper Sean Gallagher with Darragh Burke but Gortletteragh continued to pull away with a long range Woods free.

McNabola scored a fine point for Annaduff but they were having to force their game, Gortletteragh’s defence getting back to smother a goal chance on 14 minutes. Flynn extended the Gortletteragh lead with another free although McNabola replied with a lovely score from play on 19 minutes.

Annaduff, as is their creed, kept battling and battling and Gortletteragh were never able to truly relax despite a nine point lead with McNabola converting another free. Ray Cox saw a shot blocked and McNabola had a free go wide.

But gaps were appearing in defence and two Padraig Gallagher points, one fisted over and the other after breaking through a challenge more or less sealed the game. There was still time for McNabola to fire over another free but the last word fell to an unusual source with full-back Gerard Campbell tapping over after getting up in support of a break deep into injury time.