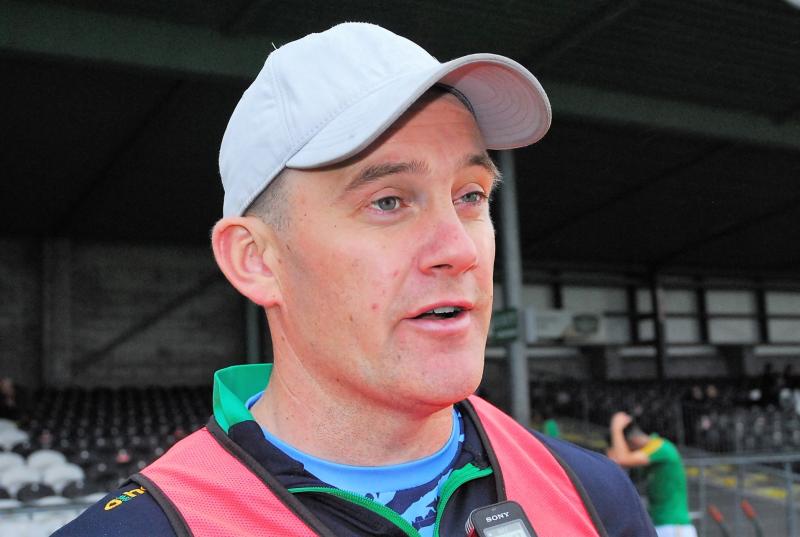 The scoreline mightn’t indicate it but anybody who was present for Leitrim’s 2-18 to 2-9 defeat at the hands of Sligo in the Electric Ireland Connacht Minor Semi-Final  in Markievicz Park last Friday evening will know that there are signs of progress stirring in underage football in the county.

With impressive performances in recent weeks from the County U14 & U15 development squads, Minor team manager Adrian Dockery felt, quite rightly, that the scoreline did not do justice to the efforts his team put in against Sligo.

“There are certainly, I feel, green shoots there,” said Adrian when chatting to the Observer, “The scoreline mightn’t indicate that but I’d hope that anyone who watched the game would see that there were passages of play that showed the kind of football these lads can play. We just needed to put a couple more of those passages together.

“Our goals were well worked, there was nothing fluky about them so it is a little bit more efficient on the ball as Sligo were. I suppose we needed just one or two more guys going a little bit better and that was part of it.”

Adrian was the first to point out that Sligo were the better team but admitted that his team struggled in the final quarter: “Truth be told, today you would have to say they were the better side and they showed that in that final quarter but that said I don’t want the lads going away without knowing that I am extremely proud of this group.

“I thought we had a slowish start and then we were clawing it back by quarter-time and then just as the game wore on, it looked as if we were growing into it and by the time we hit three-quarter time, I thought we were well positioned. But we just could have done with staying in the game in the middle third and upfront a little bit longer.

“We struggled a bit in that last 15 minutes to try and secure enough possession, even off our own kickouts - we weren’t getting our breaks and that was huge for us if I’m being honest with you.”

The ability to convert chances was crucial but Adrian said the problem stemmed from Leitrim’s inability to win and hold onto the ball at the middle of the field: “They didn’t give up and you could see them coming back at the death there, a score or two just to keep us ticking over. But they were much more efficient, scores seemed to come a little bit easier for them, we were working a bit harder.

“I often say if you get your own ball and you give it away and you work hard to get it back and then you give it away again, everybody looks tired. There was more space for them but we were struggling to get the ball out. What was happening, in spells, was that we were getting it to the other end and it was giving the guys at the back a little breather but we were having to work the ball the length of the field for that.

“They were winning our kickouts, the break especially if I’m being honest with you, in that final 15, the breaks was the issue. You’re competing for your kickout, you are scrambling to get back, the ball is going over the bar, wide or whatever.”

Not normally one to highlight individual players, Adrian did single out the performances of Barry McNulty, Tommie Taylor, Tom Hughes and Conor Keegan for special mention: I don’t normally single anybody out but I thought our full-back line was unbelievable today and the three boys had a super, super game because that was their best line and I thought they snuffed them out pretty well for most of the game.

“Barry McNulty has been immense all year for us, he is our captain for a reason - he is a super, super operator and at the wrong time, a couple of guys, the game just went away from us.”

Indeed, the Leitrim manager had warm words of praise for his entire squad: “I really enjoyed working with the bunch, you could see it there - there was no give-up in them. Just for them and the effort they’ve given, I’d have loved for them to get a little more, they deserved a little more. Very very proud of them, I know their families were here and anyone from Leitrim who were here, I hope they were proud of them because I certainly am.

“I really, really hope the people that were here and who watched this are proud of them because there were some good individual performances there, there are guys who will transition very quickly into senior football with their clubs over the next year or two and there will be one or two guys who will give Brendan Guckian with the U20s something to think about.

“You’re hoping for a couple of guys to come through from each of these Minor teams.We named a match 24 for the match today and eight of those are underage again next year, a third of our team has another year left.”