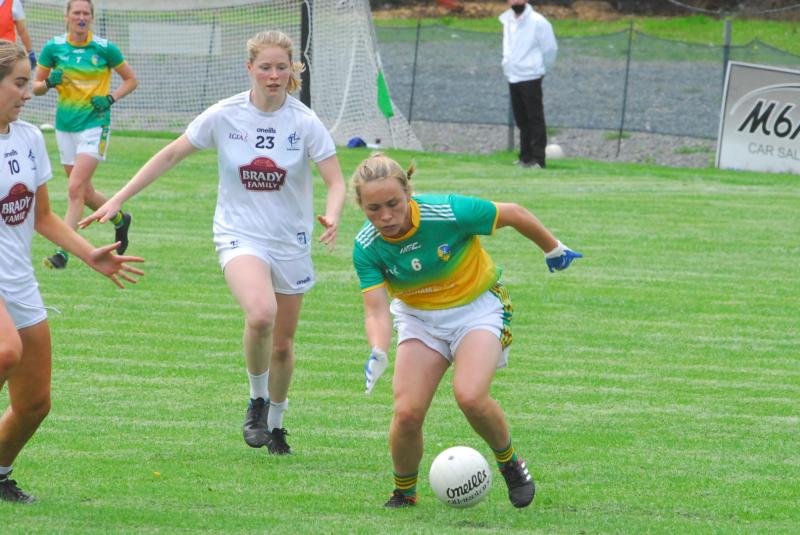 Manager Hugh Donnelly spoke in advance of Sunday’s TG4 LGFA All-Ireland Quarter-Final that he wanted his team to deliver a performance and they certainly did that against Kildare, prompting team captain Clare Owens to say that, result aside, she really enjoyed the fascinating contest in Ballinasloe.

Kildare may have won 1-11 to 1-7 but Clare felt there were a lot of positives for Leitrim to take from the game: “It is a four point loss and we have probably won games where we have performed a lot worse. I’m very happy with the performance, obviously the result is a different story but we really showed there against a top team like Kildare that we could play football.”

Kildare’s experience of Division 3 football showed in a tactical contest and the Leitrim captain agreed the Lilywhites held the edge in that department: “We were level at halftime, I think we were level at the last water break as well. They’ve been in games like this before and I suppose maybe haven’t and that’s what got them over the line.

“I think we made them work for it but experience was probably the difference today. Look at Kildare, I think it is year five of that management team - you get lucky maybe once and you get in a management team and win all around you but generally speaking, it is a three to five year progression.”

Indeed, the Leitrim captain sees positive signs for the future: “The amount of younger girls that have come on board and really settled into the team, we have subs coming on and you know whoever is coming on is quality. We have a 30 plus panel and you need every one of them.

“Some girls haven’t got a lot of game time this year and might be disappointed by that but I think they will have benefitted from being part of the panel and they’ll be driving on the team in the future because we won’t be around for that much longer. Really happy with how the year has progressed, disappointed to have it finish today.”

Clare also hopes that manager Hugh Donnelly will stay with the Leitrim squad considering the difficulties they faced over the last two seasons: “Taking Covid into account, I’d love one good year because with Covid, it has been two patchy years. We’ve worked very well with it but I’d be very happy to see him and the management stay on.”

Of course, talk like that leads to a conversation about her own future but the Leitrim captain is loving her football as she laughingly said  “Think there is an age limit!” before adding “Loving it, absolutely really enjoyed that game, loss aside. There are some super footballers on our team and we absolutely worked for each other until the final whistle.

“That is up to each and every girl, if people still feel they have something to give and they come along and whether they get their place or not, that’s up to management. But we’ll see, we’ll not make any decisions today.”