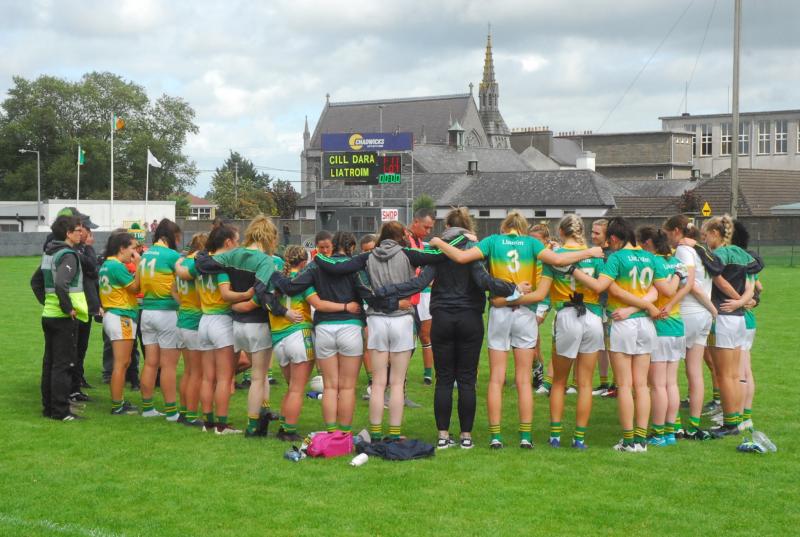 The Leitrim team is addressed by manager Hugh Donnelly after their TG4 All-Ireland Quarter-Final loss to Kildare Picture: Willie Donnellan

No hard luck stories, no joy either as Leitrim’s dreams of reaching the TG4 LGFA All-Ireland Intermediate Semi-Finalists were ended by an impressive Kildare after an engrossing encounter in Duggan Park, Ballinasloe on Sunday.

Backed by a vociferous Leitrim crowd, the Green & Gold ladies looked on their way to the semi-finals early in the second half when Michelle Guckian put them a point to the good despite Kildare dominating possession.

But the final 20 minutes belonged to an energetic and well drilled Kildare side who continued to hold onto possession and play a deliberate and fascinating style of football that held onto the ball for long periods and denied Hugh Donnelly’s side the momentum they needed to break them down.

With Leitrim dropping deep and working so hard to restrict Kildare’s attack, this meant a low scoring affair where chances were at a premium as Leitrim’s vaunted attack never got the sort of space or quick deliveries they needed to do damage.

Any time the ball was delivered quickly, scores followed as Michelle Guckian plundered two points while Muireann Devaney scored a remarkable solo effort just before halftime that ensured the teams went into the break level.

But as many Leitrim fans and even players admitted, Kildare were just that little bit better on the day, probably more advanced in their development than the Leitrim girls and it showed in a tough battle, their experience of playing Division 3 no doubt standing to them in this tense and exciting encounter. 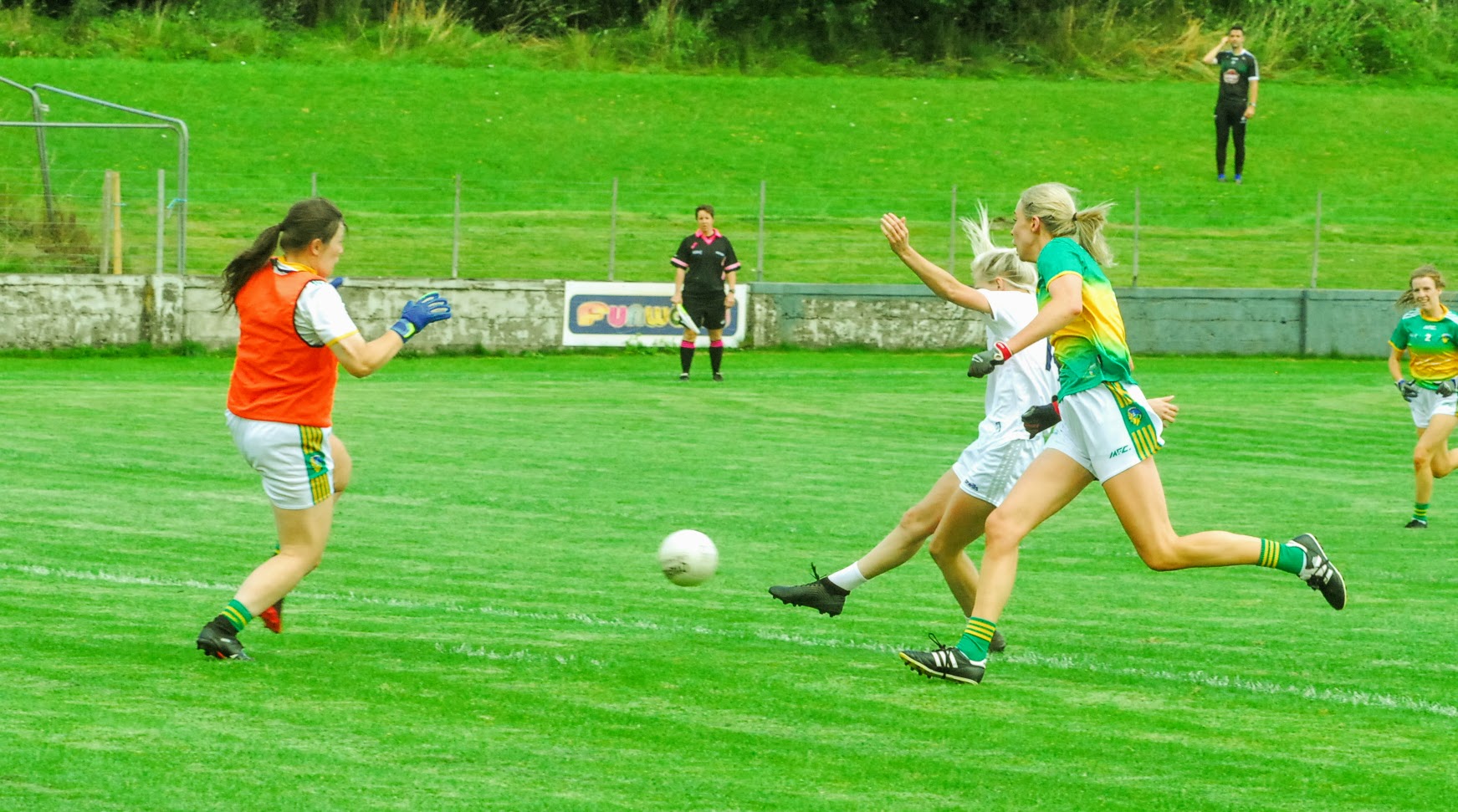 Kildare's Neasa Dooley strikes for a goal in the first half in Ballinasloe Picture: Willie Donnellan

Leitrim will have regrets, of course they will - Michelle Guckian had a goal disallowed, rightly it must be said, for a square infringement but they hit the woodwork twice with shots while they kicked some costly wides, particularly in the first half when they had the wind behind them.

They also found it hard to cope with Kildare’s deliberate, slow play, the Leinster women quite happy to pass the ball over and back across the middle of the half even in the first half, dragging the Leitrim defence from one side to the other and back again, probing for the opening they needed.

This Leitrim team thrive on inviting opposing forwards into their massed defence, turning them over and then breaking quickly to find Michelle Guckian, Muireann Devaney, Laura O’Dowd or Ailbhe Clancy on the break but Kildare’s tactics robbed them of their ability to hit on the break.

In fairness, Leitrim’s win over Division 2 side Clare probably had Kildare well warned of what they would face and there is no doubt that they did their homework well, dragging Leitrim into precisely the sort of game they didn’t want.

Despite the defeat, the 2021 campaign has been a massive success for Leitrim - there has been a noticeable improvement in all aspects of Leitrim’s play and despite the heartbreaking loss in the Division 4 Final, it has been a good year for the Ladies side.

The task now is to build on this Covid hit campaign and if they can keep Hugh Donnelly on their sideline, there is no doubt that Leitrim Ladies can lift silverware in the very near future. 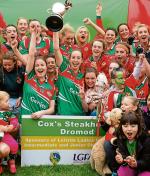 Leitrim got off the mark quickly, Laura O’Dowd pointing inside a minute after Michelle Guckian’s long pass found Leah Fox who managed to find the Ballinamore woman despite slipping.

However, there were worrying signs for Leitrima s Guckian and Muireann Devaney both missed relatively simple chances but Kildare dropped two shots short into keeper Michelle Monaghan in the same period.

A Guckian free, for a foul on Fox, extended Leitrim’s lead to two as Kildare seemed to struggle to get any penetration but when a high ball went in, Nanci Murphy managed to steal it off Siobhan McCartan to get the first score for the Lilywhites on nine minutes. 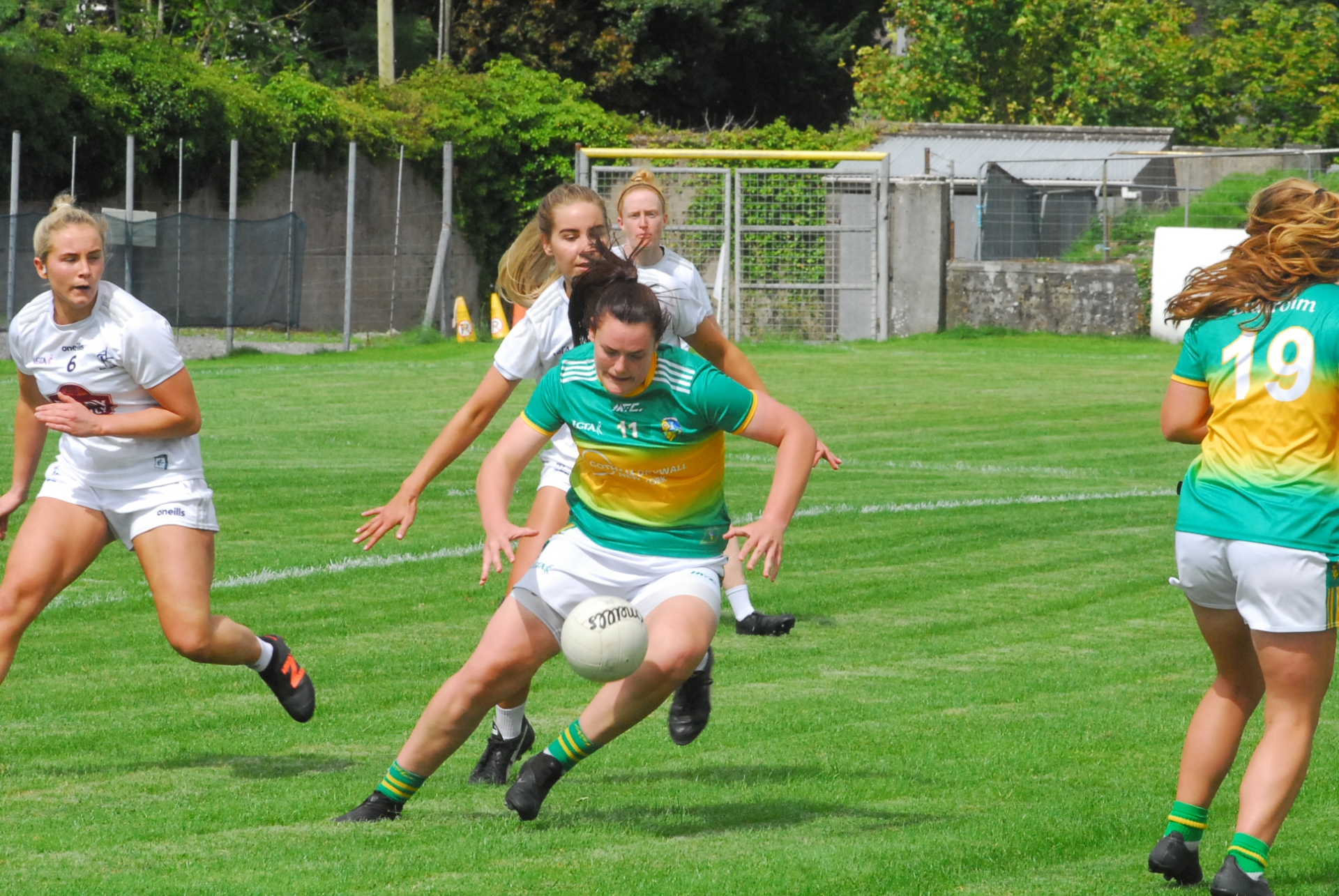 Their next score changed the feel of the game as a comfortable Leitrim were exposed when the Leitrim kickout was gobbled up and a quick ball over the top found Neasa Doherty in loads of space and she made no mistake with a composed finish.

Kildare hammered home the value of the goal with a free from Lara Cullen but the Leinster side then missed a couple of good chances and Leitrim had a lucky escape when a defensive mix-up almost let Kildare in for a goal only for referee John Delvin to call a foul.

Leitrim’s shooting woes continued with a Guckian free judged to get a touch off the Kildare keeper as it went wide but the resulting fifty from the Leitrim sharpshooter fell well short. A foul on Devaney allowed Guckian to tap over a 15th minute free but another Guckian free was caught and cleared by keeper Dervla McGinn.

Kildare’s Curran put a free badly off target but made amends after a free was moved in when the ball was thrown away on 23 minutes. A long free two minutes later to Laura O’Dowd saw her return the favour to Leah Fox by setting up the Glencar Manorhamilton player for a point.

Neasa Dooley made amends for a wide with a great point in the last minute of normal time but Leitrim gave their hopes a massive boost when a long ball finally found Muireann Devaney in space. The Leitrim forwards twisted and turned to beat two defenders before drilling the ball low to the Kildare net.

That left the sides all square at 1-4 apiece at halftime and Hugh Donnelly’s side must have felt this was their day after Kildare had dominated possession for most of the first half. And it looked as if that confidence was well founded when Leitrim had the ball in the Kildare net inside the first minute of the second half.

Unfortunately, Michelle Guckian’s fisted effort from a long ball was correctly ruled out for a square ball infringement but Guckian seemed determined to find the net, gathering Carla Le Guen’s high delivery and holding off a defender to fire a screamer over the bar on three minutes.

Curran replied with a free but then dropped one straight into Michelle Monaghan’s hands and Leitrim took advantage with a successful 35 yard free from Guckian.

Kildare made an important change with the dangerous Gillian Wheeler coming on after 11 minutes while Ballinamore’s Roisin McHugh replaced Vivienne Egan two minutes later, McHugh almost scoring with her first shot but the ball fell short.

Another Curran free, for a foul on Wheeler, tied the scores as luck seemed to desert Leitrim when Leah Fox’s shot hit the upright, the strong wind maybe diverting her shot before Curran tapped over another free after she was fouled as she charged through the Leitrim defence. 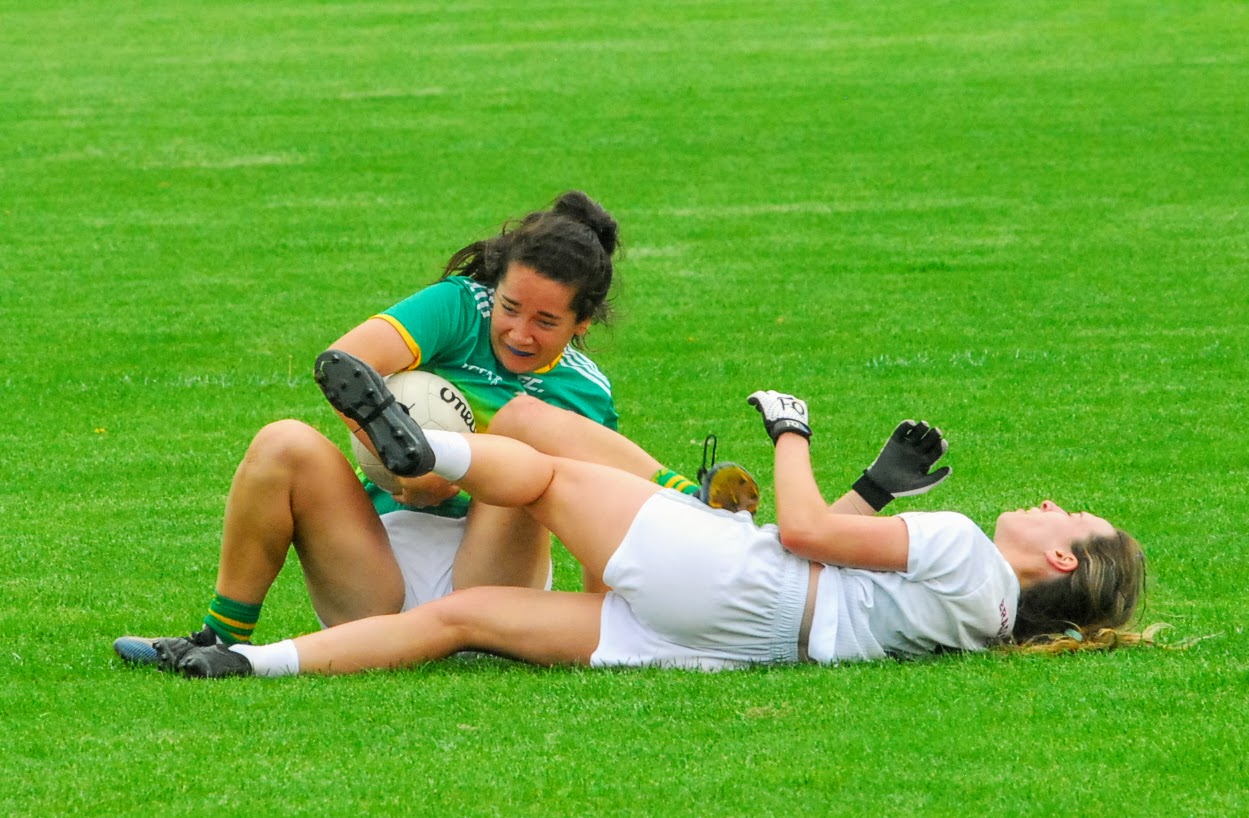 Leitrim's Leah Fox attempts to get off the ground after a collision with Kildare's Claire Sullivan Picture: Willie Donnellan

Kildare’s patient play and incredible fitness saw them start to charge through the lead was extended when two Leitrim defenders misjudged a long Kildare delivery, Wheeler tapping over with a bit of comfort with 11 minutes to go.

Leitrim got a lifeline two minutes later when full-back Laoise Lenehan was sent to the sin bin for 10 minutes but Michelle Guckian’s free was off-target despite the player advantage. After a Kildare wide, Ailish Cornyn’s long first time delivery was brilliant fielded by Guckian who tried to round the defender but saw her shot rise over the bar.

Incredibly, even with a player advantage, that turned out to be Leitrim’s last score as panic seemed to seep into the Green & Gold’s play. Kildare should really have had a second goal but saw a shot go inches wides.

From an errant kickout, good work from Wheeler and Curran resulted in Wheeler putting Kildare two up and, in the last minute of normal time, Grace Clifford thumped a massive long range shot over the bar to stretch the lead to a goal.

That meant Leitrim had no choice but to go for a goal but Kildare’s defence was outstanding even if they lost two players to yellow cards, Clifford and Dooley going off during the almost seven minutes of added time.

But apart from a Guckian free that went inches wides, Leitrim were unable to fashion even a hint of a goal chance and Kildare ensured their place in the semi-finals when a breakaway from the impressive Erica Burke ended up with sub Gillian Wheeler firing over her third point of the day.