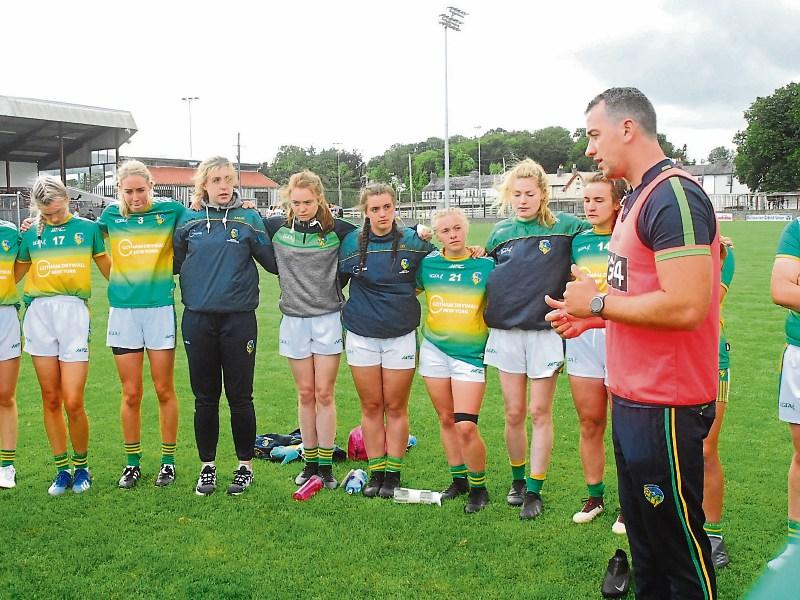 Leitrim Ladies need to stay the course and if they do, success is on its way. That’s according to Hugh Donnelly who, despite the disappointment of losing Sunday’s All-Ireland Intermediate Quarter Final to Kildare, sees nothing but positives for the County Ladies senior team.

“Players and management; to do the thing right, to get consistency and to get all the pieces of the jigsaw together, you need to stick together,” Hugh told the Observer on Tuesday morning, “As long as the players stick to the plan, there will be success coming very, very soon.”

For Hugh, the last few days have been a whirlwind with the birth of his new daughter Sophie in the early hours of Sunday morning allowing him to make the dash down to Duggan Park in Ballinasloe before a quick dash back home in Tyrone to wife Kerrie, son James and his new daughter.

So it has been a hectic few days but it wouldn’t surprise anyone that knows him to learn that Hugh has already watched Sunday’s game back on video - twice!

“I watched it twice on Monday and unfortunately the result hasn’t changed,” joked Hugh before stressing that rewatching the game has left him enthused for the future: “I keep coming back and picking up lots and lots of positives from it to be honest.

“We didn’t play poorly but it was just small margins, small errors. We had them under the cosh for long, long periods of time and on our side, it was probably a lack of experience, some of the decisions that we took, some of our shot selection, we missed a few dead balls.

“But what stood out to me more than anything was that it was the first occasion this year that we put really good back to back performances together. We played really well against Clare and we backed that up on Sunday - that was a wee issue in the national league where we couldn’t put 45 or 50 minutes together and we did that.”

Definitely not one to seek solace in moral victories, the Leitrim manager is nevertheless proud of his team’s performance against a strong Kildare side: “I know the players are bitterly disappointed and I’m not here for the moral victory by no means but you’ve got to take the positives out of it and that was certainly one for me that we were fit to contain and hold Kildare.

“Kildare were in a national league final this year and have been playing a higher standard of football much longer than we have. That team are under that same management for about four years so they are very well drilled and very well organised, they are strong, they are physical, they play on the line, they are streetwise, they are astute to the situation with their game management and that is what they did on Sunday.”

“Kildare had done their homework, once they got ahead, they managed the game really well but that is what happens when you move up through the ranks and divisions, you play quality teams and you play better quality teams.

Looking back on his own team’s performance in Ballinasloe, Hugh felt they coped well defensively but stressed Leitrim will have to look at transitioning from defence to attack better if they want to take the next step: “I felt defensively, outside of five or six minutes in the second quarter where we were under the cosh, I felt we stood up really well, for a team that is still getting to know the system, we did really, really well.

“With our system, we drop bodies back and counterattack with pace and maybe that was the one thing we will look to improve on if we are going to move forward, the transition period between defence and offence.

“But again, you have to be in these situations to learn, you have to play these teams - you have got to get to All-Ireland Quarter-Finals, Semi-Finals, National league finals to gain the experience. I’m not one for moral victories but really and truly, you’ve got to take the positives and there were any amount of them last Sunday.”

What pleased the manager most was Leitrim’s refusal to give in as they battled right to the final whistle: “What stood out to me last Sunday and even in the Clare and Fermanagh games and right throughout the national leagues, we fought and fought and fought, even in the last five minutes, we never gave up.

“Previous Leitrim teams may have thrown in the towel that little bit earlier but credit has to go to the girls because they fought tooth and nail, we didn’t stand off, we weren’t intimidated, we took the fight to them and we’ve been doing that particularly in the championship.”