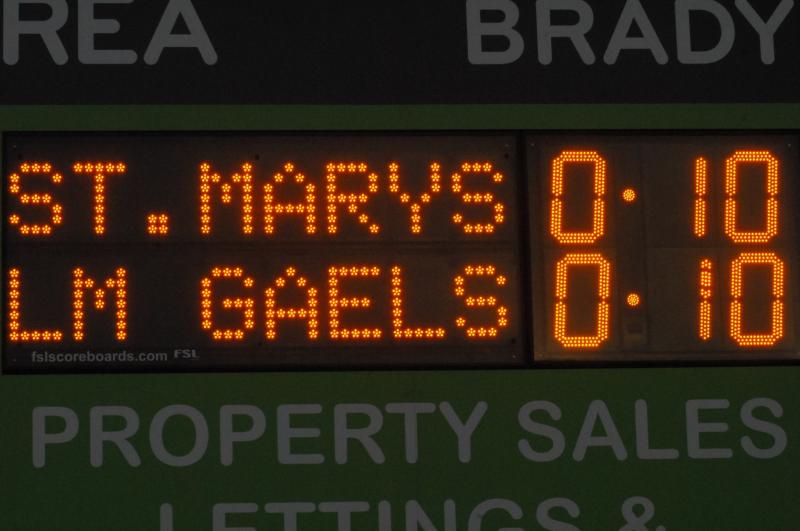 The draw might have been the fairest result from Friday’s first ever Connacht Gold Senior Championship clash between fellow parishioners St Mary’s Kiltoghert and Leitrim Gaels but that doesn’t mean both teams left Pairc Naomh Mhuire with a few regrets.

Leitrim Gaels had looked on their way to a statement victory when they led by three points with just over three minutes of normal time to go but they were grateful that County keeper Brendan Flynn made two fabulous double saves to deny Paul Keaney a match winning goal from a penalty in injury time.

Flynn went from villain to hero in a few dramatic moments after he hauled down James Glancy as St Mary’s created a last gasp goal opportunity but he redeemed himself not once, but twice, as he first saved Paul Keaney’s spot kick and then deflected the St Mary’s man’s shot over the post for the equalising score.

Truth be told, neither team deserved to win this contest that never really got going - both teams seemed afraid to give their opponents any real opening and it showed in general play with both sides guilty of some bad wides over the course of the hour.

With a strong wind behind them, Leitrim Gaels should have had a much bigger lead than their 0-5 to 0-4 advantage at the break as they missed a succession of good scoring opportunities.

Enda Moreton got the scoring going with a second minute point from a mark but Alan Doherty’s free tied the scored a minute later as dissent saw a free moved in, something that was a recurring theme for the Gaels throughout this game.

Oisin Curley restored the lead while Nicholas McWeeney was desperately unlucky not to score when he caught the kickout in full flight, ran right into the Gaels goal only for his fisted effort to lack power to get over the bar.

Brendan Flynn converted a fifty after a vital James Glancy block on Daniel O’Sullivan’ s shot but the theme of the first half was missed chances, from both sides. Aidan Flynn stretched Leitrim Gaels lead to three points with a great solo point but Alan Doherty scored after great work from Cian Singleton and McWeeney.

Robbie Lowe and Mark Diffley frees tied the scores coming up to halftime but a great Jack Flynn point from distance gave Leitrim Gaels a 0-5 to 0-4 advantage.

The big talking point from the first half was Leitrim Gaels’ influential Colm Moreton escaping with a yellow card after a high and heavy hit on Paul Keaney. Moreton, who had been the dominant figure in the first half, would have had hittle complaint had he seen a harsher punishment but the fact he was carded did diminish his influence in the second half.

Six minutes into the second half, Paul Keaney’s 50 yard free tied the scores but a foul on Enda Moreton, the most dangerous attacker on show, allowed Stephen Goldrick tap over the free on ten minutes.

However, St Mary’s took the lead for the first time when a Keaney free was followed by a huge Ray Mulvey score from play after good work from McWeeney and James Glancy. But again the Gaels came back with another Goldrick free levelling the scores before the second water break.

The tense nature of the game was obviously telling on both sets of players but Leitrim Gaels edged back in front when a patient move ended with Aidan Flynn firing over with ten minutes to go. Both teams were hitting bad wides but the Gaels seemed headed for victory when Aidan Flynn robbed Mark Diffley, his long ball finding Enda Moreton who pointed.

Moreton then edged his team in front as Leitrim Gaels again turned over a St Mary’s kickout but the town team would not lie down as Mark Diffley scored a well taken point before Paul Keaney scored a point in the final minute of normal time.

Leitrim Gaels were down to 14 players when Colm Moreton received a second yellow card and a brilliant move down the field seemed certain to end with a goal as Cian Singleton and sub Brian O’Donnell set James Glancy free but he was fouled heavily by Brendan Flynn.

Flynn then made a full length diving save, even if there was a well-held suspicion that he was well off his line and then got up to deflect Keaney’s second effort over the bar, leaving referee Patrick Guckian to signal the end of the game and a well deserved point for both teams.