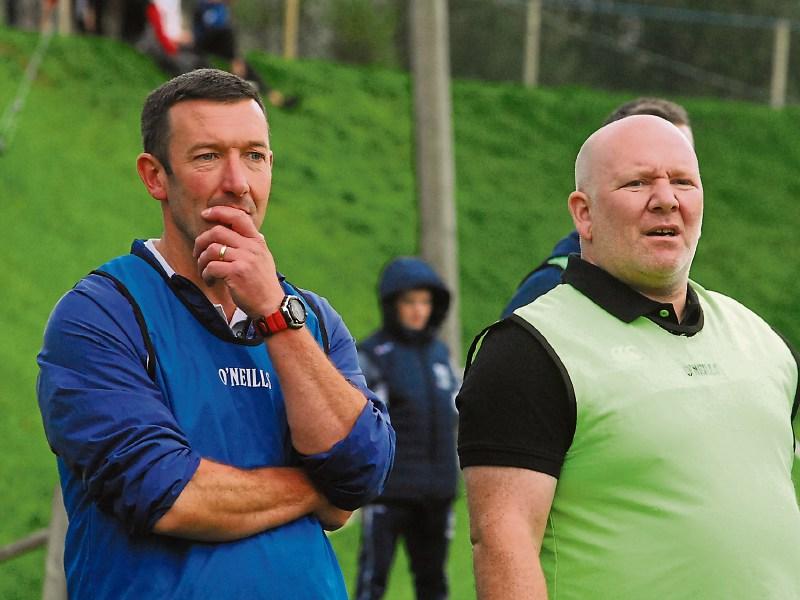 It is always the dilemma for managers after their team draws a game - was it a point gained or a point lost? But there was no confusion for Paul Prior last Friday evening as he reckons his team can “crack on” after registering what he believes was very much a point gained against St Mary’s.

The first ever Connacht Gold Senior Championship meeting between the fellow parishioners generated great local excitement and it looked as if Leitrim Gaels were on their way to registering a famous win as they led by three points with less than four minutes left on the clock.

But it was Leitrim Gaels who left Pairc Naomh Mhuire the more relieved team as County keeper Brendan Flynn saved an injury time penalty from Paul Keaney and deflected the rebound over the bar to ensure a draw. So it was no surprise that Paul Prior was happy with the draw!

“It is not a bad point to be honest with you,” said Paul minutes after the final whistle, “That is their first time in Senior football against Carrick there. We could have won the game, we could have lost it so look, either way, I’d be happy with the result.”

“We could have lost the game by two points but we’re after drawing there. We have to take the good out of it, there were an awful lot of positives - I think some of them really stood up tonight, we had a couple of young lads, Oisin Curley and Daniel O’Sullivan, making their senior debut.

“So if you look at the big picture, I think we did well. We could have lost the game by two points but we’re after drawing there. We’ll take the point and move forward from here. I think we’ll crack on from here.”

Friday’s game was far from a classic but the tension may have been due to the occasion or the fact it was Leitrim Gaels’ first outing in the championship: “It was very tense, there are a few lads coming in there who haven’t trained the last while with a few injuries or knocks.

“It is always difficult when you miss the first round and you’re coming off the back of challenge matches which you can’t get the same intensity out of. In that regard, yes, a point is good because they are off the back of a tough game against Glencar Manorhamilton. The scoreline doesn’t suggest it but it was tough so overall, I’d be happy.”

Shot selection is one area the former Ballinamore Sean O’Heslins player and manager will get his Leitrim Gaels troops to address: “Definitely, we were a little bit naive and there were shots we took from the corner there that we have to root out but they are all things to work on but as long as they work on it, it is all positive.”

Coping with Covid restrictions has been a challenge but Paul believes everyone has made huge efforts to combat the pandemic: “It has been tricky and there has been a few guys gone down in the last few months but everyone’s been good, everyone’s been sensible, trying to do the best they can to get around it but we won’t use any excuses.”

Next up is Melvin Gaels at home, a Melvin Gaels team Leitrim Gaels famously beat last year so Paul is expecting a battle: “That’ll be a tough one, they had a good result against them last year so Melvin Gaels will be looking for revenge and we played them in the mini league not so long ago there.

“It’ll be tight, it’ll be close, there’ll be no quarter given or spare there next Saturday but this will stand us in good stead. We’re up and running now and we’ll kick on from here.”