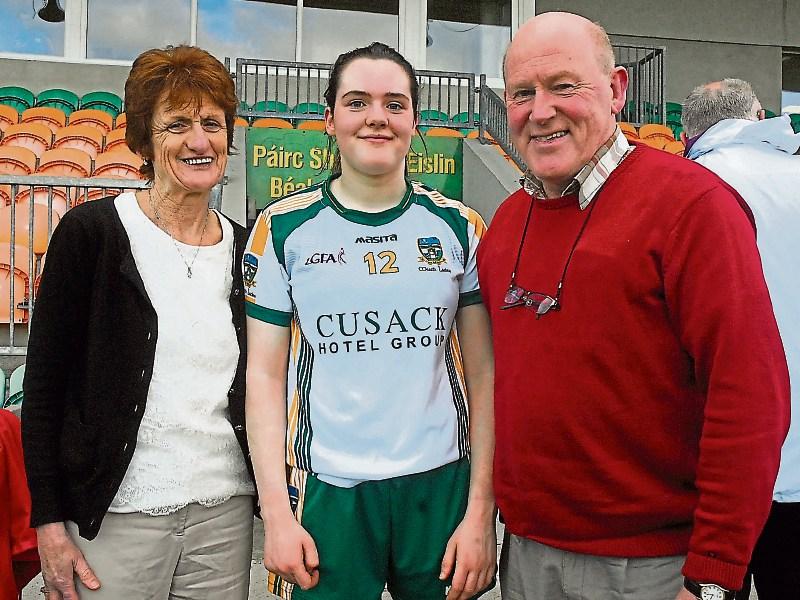 Meath's Niamh Gallogly pictured with her father Frank & mother Angela after a game against Leitrim some year ago in Ballinamore Picture: Willie Donnellan

Leitrim teams might not have been in Croke Park last Sunday but there was plenty of interest for the county in both the Offaly U20's victory over Roscommon and Meath Ladies thrilling extra-time win over Cork.

The celebrations for Offaly's wonderful All-Ireland win are probably still going on in the Faithful county but there is a connection to Leitrim's most famous footballer. Ferbane’s Cathal Flynn boasts a famous Leitrim name but what is more intriguing is that Cathal’s grand aunt is actually Ella McGarty, widow of the legendary Packie McGarty.

Cathal’s goal against Cork in the semi- final was one Leitrim’s Cathal would have been proud of. Offaly beat three-in-a row chasing Dublin in the Leinster Final, their first title since 1995 before going on to beat Cork and Roscommon in the All-Ireland series.

Later on Sunday, Meath caused a huge sensation when they came from seven points down to beat Cork after extra-time and qualify for their first Senior All-Ireland Final. And there is also a Leitrim connection through Niamh Gallogly.