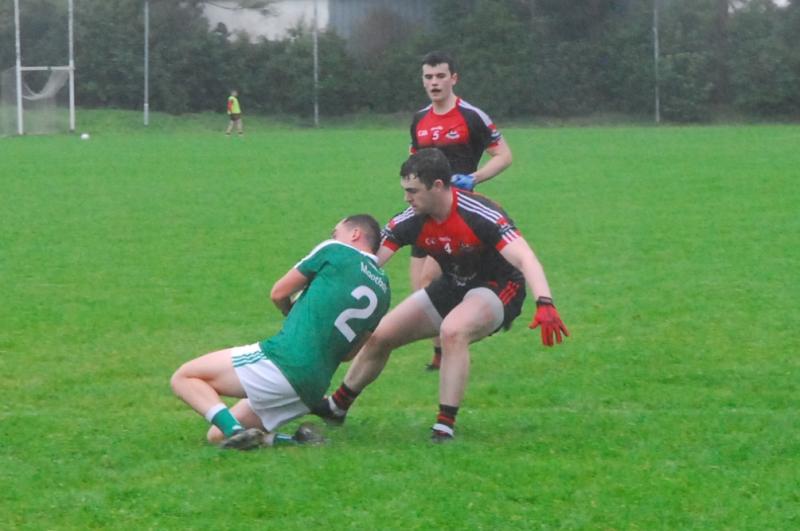 Inspired by an incredible 14 points from the boot of Keith Beirne, champions Mohill shook off a persistent and dogged challenge from Fenagh St Caillin’s in Friday’s Connacht Gold SFC clash in Philly McGuinness Park, swamping their neighbours in the second half.

Level at the break thanks to a dramatic goal from Evan Harkin in added time at the end of the half, Mohill came out a much different and more direct team in the second half as they built up an 11 point lead before an injury time goal from Oisin McLoughlin reduced their winning margin.

Many have Mohill are the outstanding favourites to retain the Fenagh Cup and on this form, it is hard to disagree as they turned what had been a battle into a procession during the second half with their immense physical conditioning and power around the middle of the park running Fenagh ragged.

Fenagh were actually level seven minutes into the second half but in the blink of an eye, Mohill opened a gap and you could see Fenagh heads dropping as Mohill forced turnover after turnover in the crucial third quarter and ran them ragged.

Keith Beirne was virtually unstoppable for the entire game but in the second half, as the conditions improved after some truly horrible rain in the first half, the Mohill man seemed to get even better and Fenagh just didn’t have a player who could hold him.

If you were trying to find reasons why Mohill might struggle, and you have to look very hard, you might wonder if the champions are overly reliant on Beirne for scores but in the form he showed on Friday night, stopping him will take a hell of an effort.

What also caught the eye was the influence the younger Mohill players are beginning to exert - Jordan Reynolds, the Harkins, Fiachra McGuinness and James Mitchell were all excellent as they carried the game to Fenagh.

Keeper Padraig Tighe also underlined that if you do manage to get by the Mohill defence, beating the last line of defence is not easy with two brilliant saves from Fergal McLoughlin and Ryan O’Rourke, although the rebound on McLoughlin’s effort did beat Tighe.

Fenagh got a glimpse up close of what will be required to dethrone the champions but there was lots to suggest that they will still have a big say in this competition. Ryan O’Rourke continues to improve after his injury problems, Riordan O’Rourke and Tom Gilheaney were very lively in attack. Conor Dwyer and Jack Gilheaney also got in some great work for the Fenagh men.

Fenagh opened the scoring with a Donal Wrynn fifty after Danny Beck punched the ball from Riordan O’Rourke’s grasp as he bore down on goal in the first minute. Riordan and Ryan O’Rourke for Fenagh and Jordan Reynolds for Mohill all missed chances before a good move was ended in style by a Ketih Beirne point on five minutes.

Beirne quickly added another after he played a one-two with Oisin Madden to score but when a long ball into the Mohill goalmouth spilled, danger beckoned but the Mohill defence closed ranks and Ryan O’Rourke fisted the ball over the bar.

Oisin Madden burst through the middle to point for Mohill but Ryan O’Rourke tied the scores again from a tenth minute free as both sides had unusual misses, Keith Beirne sending a free short and Ryan O’Rourke missing a mark.

Riordan O’Rourke converted a mark to put Fenagh in front on 14 minutes but Keith Beirne fired over from distance while Ryan O’Rourke then shot wide under pressure after opting not to take a mark but an off the ball foul allowed the county man edge Fenagh back in front.

Ryan O’Rourke and Shane Quinn were both then booked for an off-the-ball clash but Fenagh did not mind when they scored their first goal. Mohill turned the ball over with Fergal McLoughlin rushing in to fire a low powerful shot at the Mohill goal only for Padraig Tighe to make a brilliant save with his foot.

Unfortunately for the netminder, the ball spun high in the air and McLoughlin showed great persistence to run in and leap in, rising highest to fist the ball to the Mohill net.

Mohill’s response was two Beirne scores from placed balls, one a fifty but a great move featuring Oisin McLoughlin and Riordan O’Rourke ended with Ryan O’Rourke pointing before Ryan & Riordan combined to set Tom Gilheaney free for a point with four minutes left in the half.

Four points to the good, Fenagh were in a great position but Mohill responded like champions, scoring 1-1 before halftime to tie the scores. Beirne put over a free before a great move on a turnover ball ended with Evan Harkin taking a pass at pace and blasting to the net.

Level at 1-7 apiece, the rain abated for the second half and it seemed as if the better conditions were to Mohill’s liking. Keith Beirne had three minutes in the first three minutes to go with a successful free while Donal Wrynn burst through the middle to complete a length of the field move with a fine point on five minutes.

Sean Harkin scored a huge point but Fenagh were still matching Mohill, a long ball to Riordan O’Rourke worked back for Conor Dwyer to get on the scoresheet after seven minutes before Tom Gilheaney fired over five minutes later.

Unfortunately for Fenagh, Mohill had fired over three quick fire points from Ronan Kennedy and two from Beirne, one a fifty after a last gasp block Conor Dwyer block on a Jordan Reynolds shot.

Mohill were now dominating everything in the middle of the field as Fenagh’s sure handling deserted them. Points from Beirne (free), Jordan Reynolds (mark) and Domhnaill Flynn meant the gap stood at five points at the second water break.

With Fenagh running in subs, Mohill continued to pile on the scores with Beirne and Ronan Kennedy firing over but Fenagh were still a threat, Padraig Tighe making another good save to deny Ryan O’Rourke a goal with eight minutes to go.

In a game played in good spirit, there was one minor flashpoint when Domhnaill Flynn tangled with Ryan O’Rourke, the Mohill man perhaps lucky to get a red card after he obstructed O’Rourke. Sean Harkin stretched the lead to eight points before Beirne added three points, one from play in as many minutes.

The last word, however, fell to Fenagh when a long ball fell to Oisin McLoughlin who escaped the defender and planted the ball past Tighe to leave Mohill eight point winners on the night.