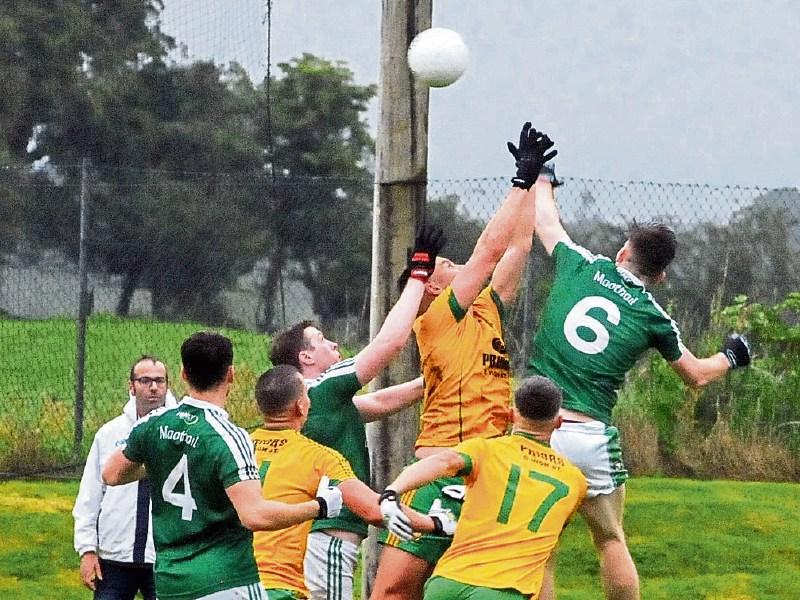 Nine points from Beirne and a typical poacher's goal from Ronan Kennedy was enough to see Mohill consign Ballinamore to their second defeat of the competition. But it was far from a typical game as Ballinamore underlined their championship credentials once more.

Keith Keegan's dismissal for two yellow cards at the end of the first half gave Ballinamore a lifeline and Dominic Corrigan's side almost grabbed it as they turned a one time five point deficit into a one point lead and, with a man advantage, seemingly on the road to an impressive win.

But Mohill's response was superb - Ronan Kennedy fisted a Beirne shot that fell short to the net and from then on, superb long range scoring from the champions was enough to hold off the Ballinamore men for another big victory.

Mohill opened the scoring when a long kick and some passing released Keith Beirne for a point and the county man added a free a minute later. Keith Keegan stretched Mohill’s lead to three points after he won the ball in the middle of the park to score.

Ballinamore got off the mark when Niall McGovern scored from distance but it was Mohill who were moving best with points from Ronan Kennedy and Keith Beirne either side of a Michael McKiernan wide for the home side.

Both sides missed chances, Luke Murphy for Ballinamore while Ronan Kennedy’s goal chance was snuffed out by good defending. Crucially for Mohill, Keith Keegan picked up the first yellow of the contest after eight minutes.

Ballinamore had a great goal chance ten minutes in but Mark McRory’s shot was brilliantly saved by Padraig Tighe at the expense of a fifty which was sent by Niall McGovern into Wayne McKeon but the Ballinamore man was dispossessed and Mohill cleared the danger.

Mohill were showing how to take chances as Mohill’s patient play ended with Keith Beirne scoring from distance while the champions were denied a Domhnaill Flynn goals thanks to a fine save from Darren Maxwell on 12 minutes.

Ballinamore were again denied a goal by a Padraig Tighe save, the netminder denying Niall McGovern a goal and they were made pay as Sean Harkin scored from distance on 18 minutes.

Good work from Michael McKiernan and Dean McGovern set up Luke Murphy for a good point and they made it two in a row after a period of patient play ended with Dean McGovern firing over.

Ballinamore’s luck, or rather bad luck, in front of the posts was holding when Niall McGovern’s effort came off the woodwork and Mohill worked the ball to Beirne who took a mark and pointed.

Mohill’s seemingly serene path to victory took a major bump when Keith Keegan received two yellow cards in the final five minutes of the half for foul on Niall & Dean McGovern, leading to pointed frees from Luke Murphy and Wayne McKeon, McKeon adding another free after a foul on Mark McRory.

Mohill did see Keith Beirne fire over another free before the break as they led 0-10 to 0-7 at the halftime interval but Ballinamore would have the extra man for the entire second half. And they set about using it straight away as Dean McGovern won the restart to set up Michael McKiernan for an early point.

Ballinamore worked to Niall McGovern for a point but Mohill halted the home team's surge when good work from Ronan Kennedy set up Beirne for yet another score three minutes into the half.

But Ballinamore were on a roll and a massive catch from Niall McGovern saw him land a great point to leave a point between the sides and Ballinamore drew level when Dean McGovern, Senan Harte & Paddy Connaughton combined to set up Mark McRory for the levelling point after 35 minutes.

Keith Beirne immediately edged Mohill back in front but a foul on Shane Moran saw Luke Murphy convert to tie up the scores once more. Murphy turned provider as his layoff gave Wayne McKeon a goal chance but the point came to put Ballinamore in front for the first time.

Ronan Kennedy tied up the scores immediately but a great catch from the impressive Niall McGovern saw him turn and score from 20 yards to get the home team back in front.

But the game tilted back in Mohill’s favour when a rare miscue from Keith Beirne saw his shot attempt fall short but Ronan Kennedy was there to fist the ball to the Ballinamore net and lead at the second water break.

Old stagers that they are, Mohill used the water break to steady themselves and they came back with the first two scores, two long range efforts from Jordan Reynolds and James Mitchell as the lead was now four points.

Michael McKiernan saw a long range effort gathered by Tighe with ten minutes to go before a Wayne McKeon free, for an Alan Armstrong foul on Barry McGovern, was matched by a Eoin Harkin point. Sub Peter Reynolds was fouled with Luke Murphy converting from a tight angle and Ballinamore continued to fight back with another massive Niall McGovern point in the final minute of normal time.

With the gap at two points, Mohill played some tight possession football, moving the ball around before setting up Keith Beirne for his ninth point of the game. With Ballinamore pushing forward in a desperate attempt to grab a goal, Mohill broke through but for once Beirne’s aim failed him as his soccer-style shot with only the keeper to beat went wide.

However, it mattered little as the champions held on for their second victory of the campaign.