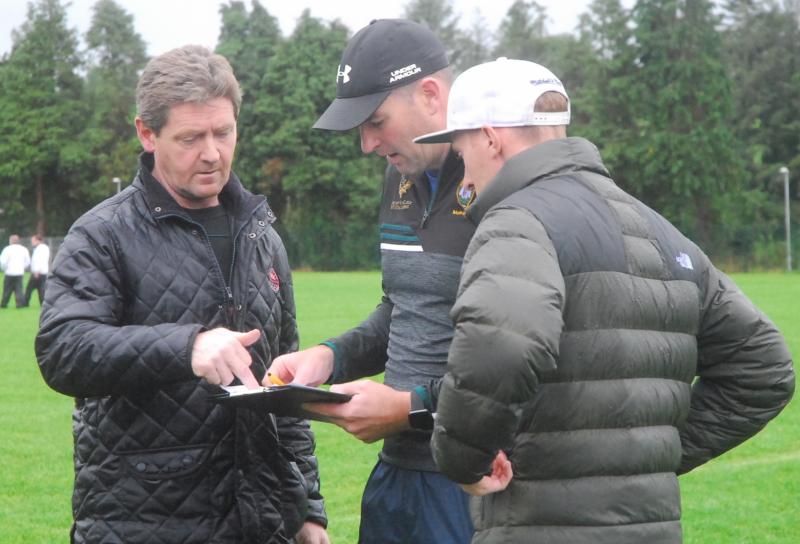 Winning is a habit and Liam Keenan certainly wants his Mohill footballers to maintain that habit in the coming weeks, warning his troops after Friday’s Connacht Gold SFC victory over Fenagh St Caillin’s that “nothing is won yet”.

With Keith Beirne in unstoppable form, scoring 14 points against Fenagh, Mohill look like the team to beat in this year’s Senior grade but Liam is looking for his troops to keep their eye on the ball, figuratively and literally!

“We’re in great form but just talking to the lads, nothing is won yet,” warned Liam, “We set a goal there, there were three games coming in a block over three weekends and the target was to pick each one of them off as we went along and see how we went.”

Indeed, they may be getting some well earned rest after three games in the space of 14 days but Liam is anxious that his team push on! “We prepare for Aughawillan the same way we prepared for this phase of the group stages. We want to top the group now, we have a chance of doing that now so we’re going to try and do that.”

But it must be hard to escape the growing belief around the county, articulated to me by quite a few neutral fans, that the title is Mohill’s to lose: “People have said that to me as well but the way we look at it, when we come to training, I always know from the vibe in training and if lads are tuned in and it only takes you a couple of seconds to see if they are or not and if they aren’t we try to correct it and get them to correct it.

“So I can say what’s going on here in training, the boys are putting in a savage effort, working hard. Obviously the last couple of weeks we haven’t been training that hard but when we have been, they have been buying into it and working hard. That’s how we judge so you know when you come to game day that you’re ready to play.

“Last year is gone, it has to be - the driving factor comes from the lads. If they weren’t putting in the effort and driving the thing on here at training, we wouldn’t be in the position we are in now”

Even talk of becoming the first Mohill team to retain the Fenagh Cup is kept low key even if it has to be a factor in Mohill’s extraordinary drive: “Is it a factor? You’d have to ask them, I’m sure deep in their mind it is there but I remember somebody mentioned it to me one of the days but another lad said all we want to do is win out our championship and that is what they want to do.”

Getting his team recovered from three hard matches is more of a priority for the former Longford footballer right now: “We’re in a great position but as I said to the lads, we need to get some rest. I thought we were tired looking there for long periods of that game in the first half so delighted to be in the position we are in.

“We'll have a rest next weekend and we’re looking forward to it too. Three games and last weekend really took its toll on us. I felt during the week we were a little bit flat, a little bit tired and maybe that came through in the first half today.

“But you have to give great credit to Fenagh, they were very good in the first half and asked questions of us and we came up with the answers eventually.”

Key to Mohill’s superb form is the equally superb form of Keith Beirne, a point Liam readily acknowledges but he is keen to point out that it is a team effort: “Keith is an exceptional talent, there is no doubt about that, some marksman to have in your team. His accuracy is phenomenal and sometimes he maybe tries a little too hard but when he’s on his game, he is outstanding.

“In fairness to him, he has got plenty of deputies around him - Jordan Reynolds, Chick, Fiachra in around him there this evening so we’re delighted with how we’re moving to be honest with you.

Them older lads are very important around the scene here, particularly at training, they are always helping to guide the lads but the younger lads are exceptional, the Harkins there, Fiachra McGuinness, Jordan Reynolds, young men but they’ve come into a good set up here so they don’t be long in learning - we’re happy with them too.”