Glencar Manorhamilton march into the quarter finals with win over Gortletteragh 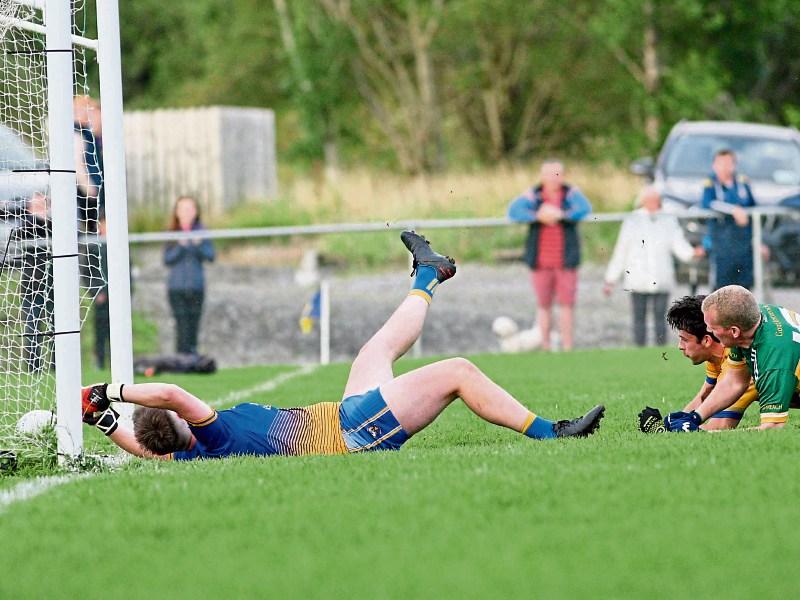 After a game of goal chances, created and missed by both sides, Glencar Manorhamilton emerged as comfortable winners at the end on Saturday evening in Boggaun and in doing so they went to the top of the Leitrim SFC Group 2 table.

Glencar Manor, who led from start to finish, enjoyed the bulk of possession over the hour. Despite playing second fiddle in most of the action, Gortletteragh were always in the hunt, but they never really got into a position to turn the tables on the home side at any stage.

Gortletteragh were hampered in Saturday evening’s clash with the unavailability of a number of their leading players, including the inspirational Jack Heslin, due to injury, etc., Meantime Glencar Manor were able to give a number of returning from injury regulars a run in game, like Aaron Hickey, who started, while Darren Sweeney and Anthony McDonald came on as subs.

Glencar Manor also started off impressively in the second minute when Evan Sweeney and Paddy Maguire shot over. In response Cathal McCrann got Gortletteragh’s account opened when landed a fifth minute point.

After that Glencar Manor dominated the exchanges during the next 11 minutes when they scored an unanswered 1-3 but they also failed to convert a number of clear-cut goal chances during this stage of the game.

It was in this period that Niall Brady palmed home a goal while Evan Sweeney added two points, one from an advanced mark, with Ronan Flynn also chipping in with a point, to give the north Leitrim a 1-5 to 0-1 advantage at the first water break.

Gortletteragh came much more into the game in the second quarter with Cathal McCrann narrowing the gap after the resumption with his second point of the day after being put through by sub David Mulvey.

Points from Evan Sweeney and Paddy Maguire (goal chance) came in reply for Glencar Manor but then as halftime beckoned McCrann finished a good Gortletteragh move to net. It could have been better for Gortletteragh when they won a penalty before the break and although Cathal McCrann sent Luke Sheridan the wrong way, the ball flew inches wide.

That left Glencar Manor with a 1-7 to 1-2 halftime lead and after the restart Gortletteragh had a let off when Niall Brady hit the crossbar with a pile driver.

Padraig Gallagher narrowed the gap when he fired over a 36th minute point. But Conor Dolan hit back with a Manor free two minutes later. When Niall Woods shot a 39th minute point the gap stood at four points but Glencar Manor upped their game again and increased their lead with three unanswered points by the second water break.

In this spell Dolan put over two frees while another sub Darren Sweeney fired over shortly after he joined the fray.

In the final quarter Gortletteragh upped their game and had they converted a number of goal chances that came their way, the game would have ended in a tight finish, perhaps.

Glencar Manor outscored Gortletteragh by 0-4 to 0-3 in this period with Conor Dolan firing over two points (one from a free), while Darren and Evan Sweeney chipped in with a point apiece. Gortletteragh’s Cathal McCrann, Francie Flynn (free) and Niall Woods answered with a point each in the game’s final quarter.