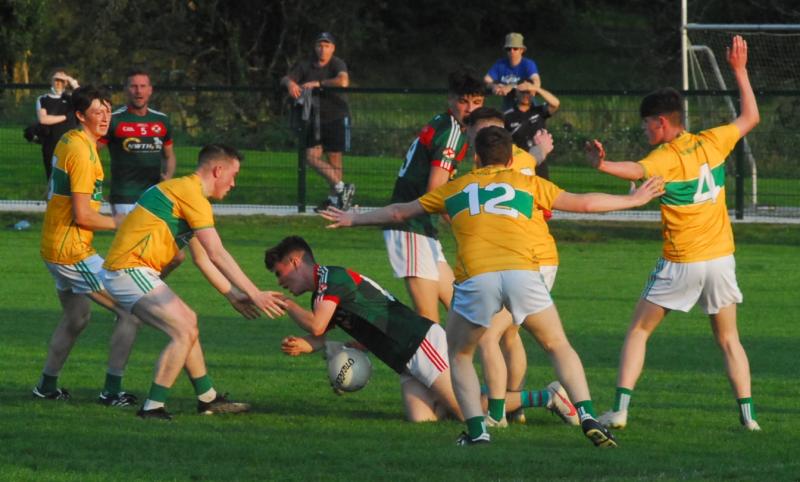 Championship success, let alone derbies, come down to fine margins and it is those fine margins that have doomed Aughnasheelin to this year's Smith Monumentals Intermediate Championship relegation final as they lost another derby by a point, this time Kiltubrid inflicting the damage on Friday evening.

In the previous round, Aughnasheelin had recovered from a big deficit to draw level with neigbhours Ballinaglera only to fall to a late winner. History repeated itself in the splendidly redeveloped Pairc Cil Tobraid on Friday as they recovered from a five point deficit against the home side to draw level and even saw two injury time goal chances denied by vital Kiltubrid interventions.

With Dromahair on four points and Kiltubrid and Annaduff on three points, Aughnasheelin, bedeviled by an injury crisis, are unable to catch any of those teams with just one game remaining while they can only draw level with Ballinaglera who have the advantage of the head to head victory and would therefore progress to the quarter-finals, regardless of the results in their final games.

For Kiltubrid, they will wonder what is their true potential for they mixed some superb play with some frantic nerves that left them under severe pressure in the second half. At times, their movement and pace and fitness had Aughnasheelin chasing shadows but when Aughnasheelin grabbed a goal out of nothing, their confidence seemed to vanish.

When they are moving well, this mainly young Kiltubrid team look capable of mounting a strong challenge in the Intermediate grade this year but they will need to deliver on a more consistent basis. But happily for them, it is a problem they can work on for the knockout stages now that they have confirmed their place in the quarter-finals.

Aughnasheelin were first on the scoreboard with a Fintan Fitzpatrick free but it could have been much more after Conor Cullen’s driving run took him through the Kiltubrid defence. His pass found Cian Sammon bearing down on goal but the recovering defenders put enough pressure on the corner-forward, causing him to mis-hit the shot as the ball was cleared.

Kiltubrid hit back with two good points from Danny McWeeney, set up by good work by Fionn O’Brien and Barry McWeeney, but a Fitzpatrick free tied the scores on five minutes. A great move involving Sean McWeeney, Aaron Hoare and Cian Sammon ended with a fine Fitzpatrick score.

Kiltubrid responded with two quick points from Barry McWeeney, taking a bare eight seconds from kickout to score, and then when Kiltubrid won the kickout, Conor Prior raided from defence to fire over seconds later.

Both teams dropped shots into the keepers hands but it seemed as if the team were determined to score in bursts of two, Fitzpatrick adding another two to Aughnasheelin’s tally from a free and a mark.

But Barry McWeeney matched that with two successful frees and after Conor Cullen and Hoare both missed chances to tie the scores, a great sidestep from Mick McCormack freed him in the middle of the park and he landed a great score from distance.

Kiltubrid were denied a goal by a fine save from Kevin McWeeney just before the break as the home side led 0-7 to 0-5 after an entertaining first half. Kiltubrid’ pace and mobility were causing Aughnasheelin real problems and a long ball to Kealan McKeon just after halftime led to a pass to Danny McWeeney and then a point for his brother Barry.

A rampant Kiltubrid looked well on their way to victory when Fionn O’Brien chipped over a nice point and Barry McWeeney added a free to leave them five clear after just four minutes and seemingly cruising with Aughnasheelin in apparent disarray.

But games changes in an instant and when Kiltubrid failed to clear a ball, a ball back across the face of the goal saw Cian Sammon catch the defender napping, flying in to volley the ball first time to the back of the Kiltubrid net.

Kiltubrid were rattled, Danny McWeeney firing wide after a good run by his brother created an opportunity for Kealan McKeon. A foul on Gavin Sammon saw Fitzpatrick narrow the gap and Aughnasheelin tied the scores on ten minutes when they turned the kickout over and Gavin Sammon fired a brilliant shot off the side of his boot over the Kiltubrid bar.

Kiltubrid steadied themselves when sub Emmett Mahon and McKeon combined to set up Stephen McLoughlin for a good score before Mahon claimed a mark and converted. It was end to end stuff at this stage with Conor Prior making a good catch from a Fitzpatrick free under his own crossbar but Fitzpatrick did convert a free just before the water break.

That left just a point between the teams and with Aughnasheelin starting to push against a visibly nervous Kiltubrid, gaps were starting to open. A Barry McWeeney free left two in it again but Gavin Sammon showed all his veteran experience to score a brilliant effort under pressure with four minutes left.

Kiltubrid almost killed off the game when sub Fergal Meehan broke through on goal but Kevin McWeeney made a save that would have pleased his mentor Martin McHugh, smothering the ball and getting it clear.

Catahl Egan had a bad wide and Kiltubrid made them pay with midfielders O’Brien and McCormack combining to set Barry McWeeney for a point after a great move in the last minute of normal time.

That left two between the teams but that is a dangerous lead and Aughnasheelin came hunting for the goal that would win them the game. And they almost got it only for Noel Gill to make a great save while Fintan Fitzpatrick’s follow up was deflected just wide.

That left Aughnasheelin with a fifty and a crowded goalmouth but Sean McWeeney’s effort had just too much air as it floated over the bar as the final whistle sounded seconds later to leave Kiltubrid relieved and Aughnasheelin frustrated.

Drumreilly march on with big win over Bornacoola