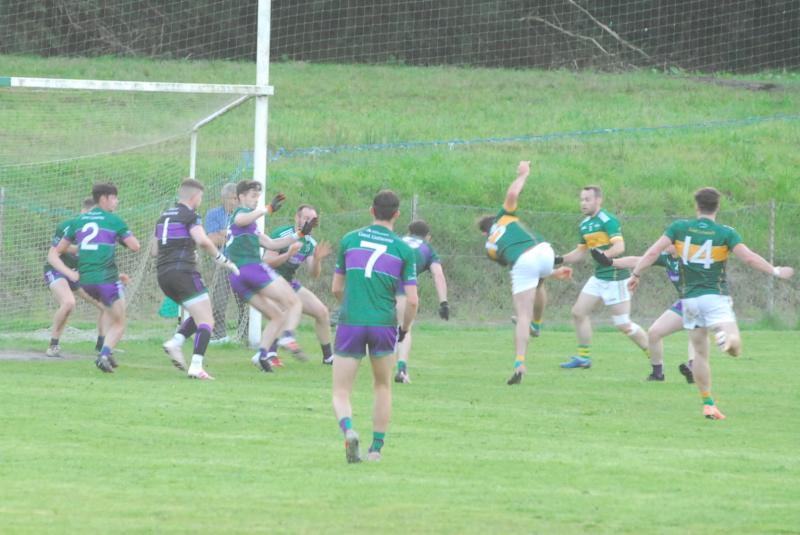 With their backs to the wall and trailing by two points, Gortletteragh dramatically grabbed a lifeline in this year’s Connacht Gold SFC when they struck two goals in the final ten minutes to shock Leitrim Gaels in front of their delighted fans on Saturday evening.

After suffering defeats in their opening two games, Gortletteragh simply had to win to avoid heading to the relegation final and they managed to pull off a famous win against the odds, their ability to grab goals and hang in the game when under pressure proving crucial in this exciting and hard hitting encounter.

Leitrim Gaels, who led by six points as halftime approached, looked the better side for long periods but as the game progressed, Gortletteragh doggedly refused to fade away and when the game became a battle in the final quarter, the Gortletteragh men rose best to the challenge.

Indiscipline caused Leitrim Gaels huge problems in their draw against St Mary’s and it came back to haunt them again as they grew increasingly frustrated, contesting decisions with referee Michael McGirl and allowing their focus to wander and Gortletteragh took full advantage.

With the game increasingly fractured, Gortletteragh seemed to thrive in the chaos as players, who were laboured and often outclassed in the first half, roared into the game with ferocious intent as Leitrim Gaels saw their focus disappear.

A crucial factor in Gortletteragh’s late surge was the decision to place Jack Heslin closer to goal. Missing for the first two games due to injury, Gortletteragh’s captain was involved in a fascinating battle with county star David Bruen, the Gaels man probably shading the battle.

Free from the attentions of the immensely fit and mobile Bruen, Heslin started to terrorise the Gaels rearguard and it was his pace and ability to go by the defence that created goals for Padraig Gallagher and Keoghan McGovern in the final ten minutes.

Credit to the freetaking of Francie Flynn who converted six frees, along with one from play, to punish growing Gaels indiscipline and keeper Niall Tiernan who made two crucial saves to prevent Gaels goals in the second half.

Leitrim Gaels are into those quarter-finals but depending on results, they could end up playing the Group 1 winners Mohill so they will want to win their final game against Glencar Manorhamilton to avoid that scenario.

Both sides opened with a couple of missed opportunities before a quick free to Evan Ward saw him offload to a charging Jack Heslin who burst through to score. Francie Flynn thumped a 40 yard free over the bar to put Gortletteragh two clear but a ball from Colm Moreton saw Enda Moreton score with ease.

Moreton almost got a goal on six minutes only for Niall Tiernan to make a splendid save to divert Moreton’s low shot out for a fifty which Brendan Flynn put wide. Oisin Curley converted a mark to tie the scores but then Gortletteragh struck for a goal, Jack Heslin catching a kickout.

His long ball was quickly transferred to a charging Evan Ward who played a one-two before bundling the ball over the line for a dramatic ninth minute goal. Stephen Goldrick replied for Leitrim Gaels but their shock as Gortletteragh’s goal didn’t last long as they found the net themselves within three minutes.

Shane Rinn’s strong run saw him hold off a defender before unleashing a powerful shot that cracked off the crossbar but didn’t go over the bar, rising high in the air long enough for Enda Moreton to rush in and beat keeper Niall Tiernan to the dropping ball, a deft touch just getting the ball under the crossbar.

Cathal McCrann tied the scores from a mark but points from Jack and Aidan Flynn, two from the county man put them three clear and the Gaels surged clear with further points from Goldrick and Daniel O’Sullivan.

Jack Heslin, engaged in a great battle with David Bruen, scored a lovely point but a monster point from Colm Moreton and another from Enda Moreton that was originally waved wide by the umpires only for the intervention of linesman Donal Butler to get it registered saw Leitrim Gaels lead by six with just two minutes left in the half.

Crucially, Gortletteragh finished the half with a bang as Padraig Gallagher finished off a great move with a close range goal and Francie Flynn fired over to leave the halftime score at 1-10 to 2-5, a two point lead for the Gaels.

Gortletteragh were soon level with Cathal McCrann instrumental in both scores, winning a free for Francie Flynn to fire over before scoring from play himself to tie the scores after just two minutes.

Just as important for Gortletteragh were two vital blocks on shots from Conor Guckian and sub David Regan that prevented certain goals although Regan did point on eight minutes. A Francie Flynn free tied the scores once more but Leitrim Gaels seemed to be taking control again as an Aidan Flynn free and a huge Enda Moreton score put them two clear.

Niall Tiernan made another vital save when David Regan got in behind the Gortletteragh defence but Regan did put over a free to leave his team three clear midway through the half, although Niall Woods did score a brilliant effort to close the gap.

However the Gaels moved clear again with two from David Regan, one from a free, but the contest took another wild turn on 50 minutes when Jack Heslin, switched into the full-forward line, burned the defence and passed the ball across the face of the goal where Padraig Gallagher showed great bravery to charge in and force the ball over the line while just avoiding a collision with the post.

Leitrim Gaels responded well with a fisted point from Aidan Flynn to leave them two clear again but then the game took another huge turn when Colm Moreton received a second yellow card for his second dismissal in the competition.

With the Gaels seemingly losing their composure, Gortletteragh surged and incredibly they got a fourth goal when another Heslin surge down the wing saw him float the ball across the goal for Keoghan McGovern to field. The chance looked gone but McGovern worked his way in front of the goal before blasting the ball to the net.

That put Gortletteragh a point up and they were flying as Leitrim Gaels were kicking away the ball and every Gortletteragh player seemed infused with a new energy. Francie Flynn fired over two frees, one moved in as dissent really cost Leitrim Gaels.

Oisin Niblock received a black card in added time but another Flynn free left Gortletteragh four clear. Leitrim Gaels kept looking for a goal and floated a free into the Gortletteragh goalmouth where Conor Guckian fielded, got his shot away but referee Mick McGirl spotted an infringement and awarded a penalty.

Unfortunately for the Gaels, Aidan Flynn’s spot kick flew high over the bar as Gortletteragh grabbed the win they desperately needed.