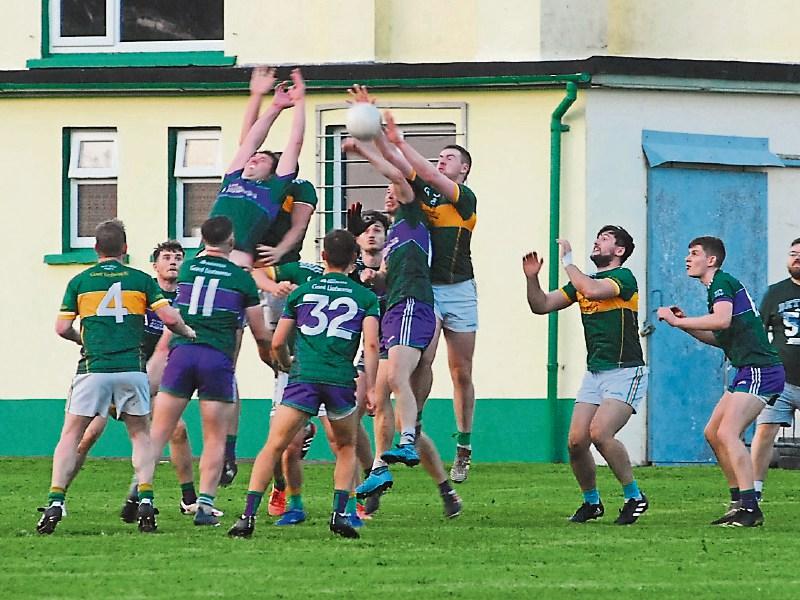 Next weekend is an intriguing one for the Connacht Gold Senior and Smith Monumentals Intermediate championships as the group stages in the Senior grade comes to an end while Group 1 in the intermediate is done and dusted.

Yet for all that, there is plenty to play for next weekend and points won or lost next weekend could literally decide your fate in the quarter-finals as the difference between finishing first or second in your group or third and fourth could be enormous.

We’re going to take a look at the Senior games as a package because of the implications for the group while we will go through the Intermediate games as usual.

Also an important point to note is that all games this weekend have the earlier throw-in time of 6.30 pm so don’t miss out on the first half of your club’s game by not making the adjustment!

Saturday’s games in Group 1 have relevance for finishing places in the top four and nothing more, although Allen Gaels would be anxious to cause a stir ahead of the relegation final. A win over Fenagh will be too late to see them make the quarter-finals but it would be a huge lift for a team who have struggled badly this year.

Most people I talked to were surprised that Fenagh St Caillin’s didn’t register a win against Aughawillan but maybe that’s doing a disservice to both teams - Aughawillan showed enough against Ballinamore to suggest that they are still tenacious opponents and even without Mark Plunkett, they are dogged warriors. Hard to know if Fenagh should be worried about their form - they are missing a few key personnel, particularly in defence and that makes a big difference. Getting those players back for the quarter-finals is the only requirement right now.

Victory would lift both Aughawillan & Fenagh above Ballinamore in the group and Fenagh into second place and that is a huge prize. Unfortunately for the Willies, they are coming up against what seems like an unstoppable force right now in Mohill but we only have to look at Kerry & Dublin in recent weeks to know nothing is guaranteed.

Still, hard to look beyond Mohill and Fenagh St Caillin’s for the wins here.

Now this is a group with lots of possibilities - St Mary’s can top the group with a win but so can Glencar Manorhamilton while a big win for Leitrim Gaels could see them take top spot if their fellow parishioners fall. And, of course, Gortletteragh have the most to play for as even a point on Friday would be enough to put them through to the quarter-finals.

Melvin Gaels are the outsiders looking in through all this - their programme is finished and they will be praying St Mary’s prevail against the 2020 Intermediate champions. The Carrick men are unbeaten but haven’t really hit top form and even against an understrength Melvin Gaels, they laboured to put the game away. Still, they will want to finish the group on a high and they face a Gortletteragh team who will bring every bit of fire and fury they can in a bid to get the point they need. They rode their luck against Leitrim Gaels but the crucial fact is that they did enough to stay in touch and when the time was right, they struck with real ambition and power.

Leitrim Gaels were left stunned by their loss but long term, it could prove a blessing for they learned that they must maintain their composure. At times, they looked in a different class to Gortletteragh but they couldn’t keep their goal protected and that is an area Glencar Manor’s deadly forwards will target. Glencar Manorhamilton have moved nicely through this group, overcoming a loss to St Mary’s in the first round to book their spot. They won’t take it easy, particularly with Mohill or Ballinamore possibly awaiting on the other side and they will test Leitrim Gaels in a very different way.

Form tells us St Mary’s will sneak by Gortletteragh and Glencar Manor might do the same against Leitrim Gaels but I wouldn’t want to put any money on it. Avoiding Mohill is the big prize right now so finishing anywhere but fourth is crucial - that is motivation enough. If pressed for a verdict, I’m going to plump for St Mary’s and Leitrim Gaels but I would not be surprised to be completely wrong!

Dromahair have made a virtue of coming through tight battles but Kiltubrid are doing the same this year, drawing with Annaduff and beating Aughnasheelin by a point. Both are safely through but finishing top of the group is a huge prize so there will be lots to drive both teams on. Dromahair have been steady and impressive so far and anyone who fouls will be punished by Martin Feeney. Kiltubrid are starting to show the benefits of their underage link in Mac Diarmada Gaels and they have a mobile team with lots of spirit and guts. This will be close, maybe even a draw but, at home, I’ll give the nod to Dromahair.

Tough to know what to do here if you are from Aughnasheelin - injuries have hurt them badly this year after the highs of winning the Division 2 League and there may be the justifiably temptation to look ahead to the relegation final. A win on Saturday would be nice but having a full complement of players for the relegation decider is probably more important. Annaduff will want the win to get back to winning ways after their draw with Kiltubrid and that motivation may be enough in this one.

This has the potential to be a season maker for Carrigallen as they face games against Bornacoola and Drumkeerin. Their win over Drumreilly was a huge boost but they will know that defeats in their remaining two games would see the Bors leap over them into the quarter-finals so a win or a draw against Drumkeerin would be huge and end the group. Drumkeerin, however, are formidable opposition and at home, they could seal their place in the quarter-finals with a victory here. This will be tight but home advantage just about swings it Drumkeerin’s way.

Another derby in this group of derbies and this is going to be hard fought. Drumreilly lost by a point to Carrigallen but started without John McKeon and lost Declan Maxwell - if they have their full complement of players, Drumreilly would be confident enough but they come up against a driven and ambitious Aughavas team who are scoring well and playing with confidence. Aughavas have made an impressive step up to the Intermediate grade while Drumreilly came in the opposition direction so it should be a fascinating contest. This will be a battle but I think the incredible fitness of the Aughavas lads may just carry the day here.