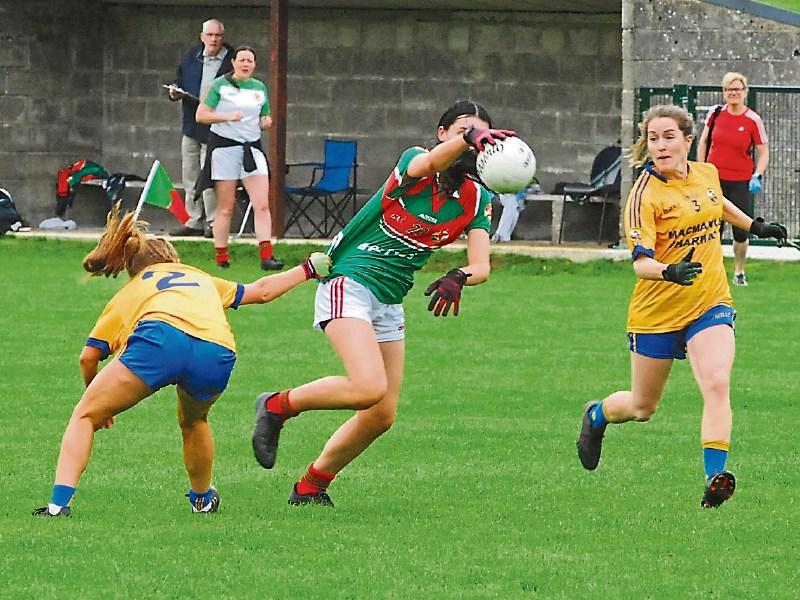 Recently crowned 2020 Connacht intermediate champions, Glencar Manorhamilton got quite a fright before they eventually overcame the challenge of a battling Kiltubrid outfit in Sunday morning’s Gotham Dry Wall LGFA SFC opener in Kiltubrid.

An early first half Annette Ferguson goal proved to be a tonic for the champions who came under intense Kiltubrid pressure who managed to turn the on their opponents as the first half wore on to claim a three point advantage.

But the Kiltubrid women suffered a setback before the break when Leah Fox fired to their net and shortly afterwards, they were reduced to 14 players after Sinead Tighe was sin binned.

But despite seeing Annette Ferguson sin-binned, Glencar Manor still managed in the last quarter to outplay Kiltubrid, even though the Kiltubrid women only trailed by a point as the game approached the 60th minute mark.

Leah Fox won a late penalty for the champions, converted by Ailbhe Clancy, that finally put victory out of Kiltubrid’s reach. It was a victory that Glencar Manor were made fight all the way for to achieve.

Michelle Guckian got Kiltubrid off to a good start when she fired over in the game’s opening minute and over the following five minutes her side were on top in the game’s initial phase of play. However, Glencar Manor hit back with a sixth minute Annette Ferguson goal from 25 metres out with the ball just dipping under the crossbar at the last second with Muireann Devaney quickly adding a point

Before the game’s first water break Emma Guckian replied with a point for Kiltubrid who fought back tenaciously in the second quarter and put Glencar Manor on the back foot for most of this period. Points from a Michelle Guckian free following a foul on Emma Guckian and from play by Aine Redican a minute later put Kiltubrid on level terms and they regained the lead when Emma Guckian fired over a 26th minute point.

Over the next four minutes, Kiltubrid increased their advantage thanks to two Michelle Guckian points but as the game ticked into added time, Leah Fox struck for a Manor goal to level the game for a second time.

Shortly afterwards Kiltubrid was reduced to 14 players for ten minutes when Sinead Tighe received a yellow card and then Ailbhe Clancy tapped over a free to put Glencar Manor ahead by 2-2 to 0-7 at halftime.

After the restart Glencar Manor stretched their advantage to four points by the 36th minute with Ailbhe Clancy hitting over two points and Leah Fox adding one. But an Ellen Keaney goal reduced that lead by to the minimum. Before the game’s second water break Ailbhe Clancy hit back with a point but the north Leitrim side was reduced to 14 women for ten minutes shortly after when Annette Ferguson saw yellow.

In the final quarter Glencar Manor managed to outscore Kiltubrid by 1-4 to 0-3 and ensure victory. Michelle Guckian hit over three points in answer to a point each from Muireann Devaney and Ailbhe Clancy. But then Glencar Manor finished the final quarter strongly with Ailbhe Clancy converting a penalty after Leah Fox was fouled while Fox herself tacked on two points afterwards.