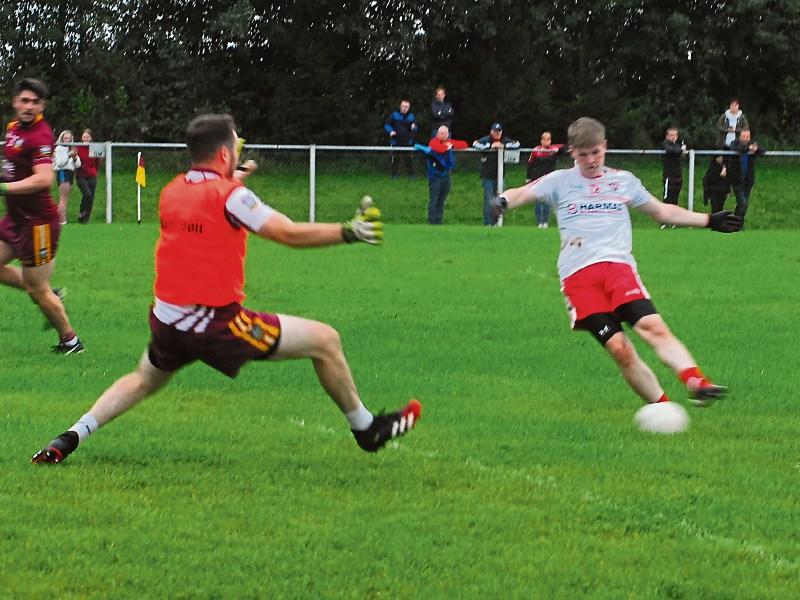 With the eyes of both teams apparently more on the quarter finals than this Smith Monumentals IFC Group 1 encounter last Friday evening, two goals in a minute was enough for Annaduff to hand St Patrick's Dromahair their first defeat of the campaign.

2020 finalists Annaduff had gone through a rocky patch in recent weeks but found enough on the night here to claim victory although it is hard to know how much either team will read into the result.

In a game that never built up to the intensity that you'd expect from a championship encounter, two goals in the space of a minute from Sean Duignan and Jason Ward was enough to give a more clinical Annaduff the victory although Dromahair will feel that a late rally might have rescued something from the game for them.

However, Annaduff will be pleased to get back to winning ways and the win comes at a perfect time for a team that has blooded a lot of young players in the group stages and has quite a bit of experience.

Dromahair will be happy enough, safe in the knowledge that they will be much better in the knockout stages at full-strength.

Annaduff virtually ensured themselves victory inside the first ten minutes as they opened with good points from Sean McNabola (free) and Kenny Cox while Mark Beirne saw a shot blocked. The key moment came when Annaduff gobbled up a poor kickout and advanced on goal on seven minutes.

Kenny Cox looked to have lost the goal chance but managed to get the ball to a charging Jason Ward who was tripped by Rory Kelly with keeper Killian Torsney saving the shot. However, referee Ray McBrien awarded the spot kick, gave Kelly a black card and Sean Duignan easily converted.

Dromahair were clearly reeling for the very next attack yielded another Annaduff goal, this time a slick move ending with an unmarked Jason Ward palming the ball to the net. Martin Feeney replied from a free but another good move for Annaduff ended with a fine Dean Gill score.

It might have been different had Martin Feeney not being denied a goal by a fine Darragh Burke save after a defensive clearance was blocked. Annaduff were not pulling away and two Feeney points, the first a fine score from play, cut the gap.

Annaduff were living dangerously with Burke a relieved man to see a teammate clear the ball off the line after his clearance was blocked by a Dromahair attack. Annaduff went straight down the field but a vital Jamie Conlon block prevented the score.

Feeney converted another free but McNabola replied from a placed ball to leave Annaduff with a 2-4 to 0-4 halftime lead. Dromahair’s hopes took another blow when Bertie Cunningham was blacked card for an attempted trip, McNabola converting the free on five minutes.

Sub Jack Hughes made an instant impression with a good point while Annaduff could have had a third goal but Aaron Duignan saw his close range shot cleared off the line after a good move, although Dillon Keane did converted from the resulting 50 after 43 minutes.

That turned out to be Annaduff’s last score as they and Dromahair started to make changes but the north Leitrim men’s changes made a bigger impact as Feeney converted two frees.

Still Annaduff looked comfortable until five minutes from time when a high Feeney ball into the goalmouth was fielded by James Morrison who fired expertly to the net and suddenly there was four between the teams.

Dromahair were now dominating possession but wides came back to haunt them as all they could manage was a late Feeney free as Annaduff held on for the win.