Goals do the trick for Drumkeerin 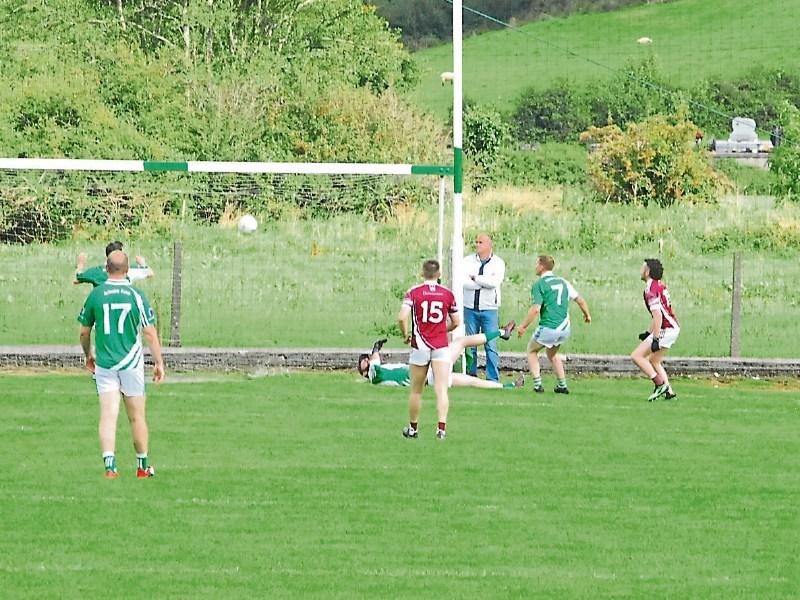 In the wide open lottery that is the Smith Monumentals IFC this year, Drumkeerin put their hand up as possible contenders for the title but Aughavas must be wondering what exactly they have to do to get a win.

Three superb counter-attacking first half goals from Drumkeerin propelled them into a lead that Aughavas, with a defiant and high scoring display, just couldn’t overcome as the north Leitrim men leapfrogged the home side into second place in the group.

Given that they only lost to Drumreilly by a point, you have to consider Drumkeerin more than capable of finally ending their litany of heartache in the Intermediate grade but Aughavas must wonder how they could score 17 points and still lose the game.

Were it not for two brilliant goal line stops from Darragh Flynn to prevent shots from Kieran Moran and Niall McCabe entering the net in the second half while another Moran shot was also stopped by a defender on the line, we could easily have seen a different result.

Yet, hard to quibble with Drumkeerin’s victory - they took their chances, even if they were a bit wasteful and displayed enough resolve to hold out against an Aughavas attack where Seamus Sweeney again impressed, hitting nine points on the day.

A big concern for Aughavas is the loss of influential defender Paul Bohan for the quarter finals, shown a straight red card after a clash that also saw Drumkeerin’s James Gallagher see the line with two yellow cards. Given the goals they have conceded, losing Bohan is a big blow to their hopes.

Jamie Langan opened the scoring but it was Aughavas who quickly went into a two point lead thanks to points from Sweeney (2) and Paul Bohan. But Drumkeerin served notice of their threat when a long ball found James Kerrigan in the corner. He passed to Aidan Dolan who spotted David Feeney arriving in unmarked at the far post and he buried the ball in the Aughavas net.

Langan and Sweeney swapped two points apiece before Sweeney finished a great move with a sweet point to tie the score on 15 minutes. But again Drumkeerin hit on the break and with a bit of clever thinking after the water break.

With James Gallagher on the field but hugging the sideline, Aughavas may have thought he was off the field but Kevin Forde found him with a superb kickout. A quick ball found Daniel Maguire and while Ross Williams did superbly to save his first shot, the Drumkeerin man buried the rebound in the net.

Aidan Dolan added a point but Aughavas came back with points from Shafik Oubihi and Sean McKiernan but points from James Kerrigan and Jerome Maguire kept the gap to four points. Sweeney pulled back another point with a fine strike from the left corner.

But just before halftime, Cathal McCauley won the ball after a kickout broke his way. A quick pass to Aidan Dolan and the midfielder spotted Jamie Langan in space, his low shot to the far corner a real daisycutter of a strike to leave Drumkeerin with a 3-6 to 0-9 halftime lead.

Whatever you say about Aughavas, they don’t lack for spirit and they hit back with three points in the first eight minutes of the second half from Niall McCabe, Sweeney and Colm Maguire to cut the gap to a goal. Langan and Sweeney swapped scores before Sean McKiernan saw a goal chance go narrowly wide after 11 minutes.

A Sweeney free cut the gap to two but both teams then lost a player, Paul Bohan to a red and James Gallagher to two yellows, meaning they would finish the final quarter a man down. Langan scored a huge point but Trevor Shortt kept the pressure on with a good point.

Eoin Kenny struck a long point from distance as Aughavas seemed certain to draw level, the gap now at a point but Drumkeerin showed their resolve with points from Cathal McCauley and Dolan to open up a three point gap.

Aughavas came looking for goals but in the space of a minute, Darragh Flynn made two goal line saves from Kieran Moran and Niall McCabe goal bound efforts while Moran saw another shot stopped on the line, Colm Maguire firing over afterwards.

Aughavas kept pressing but they couldn’t get the goal they needed and Jamie Langan sealed the win for Drumkeerin with an injury time free.