Champions send out a big message with destruction of St Francis 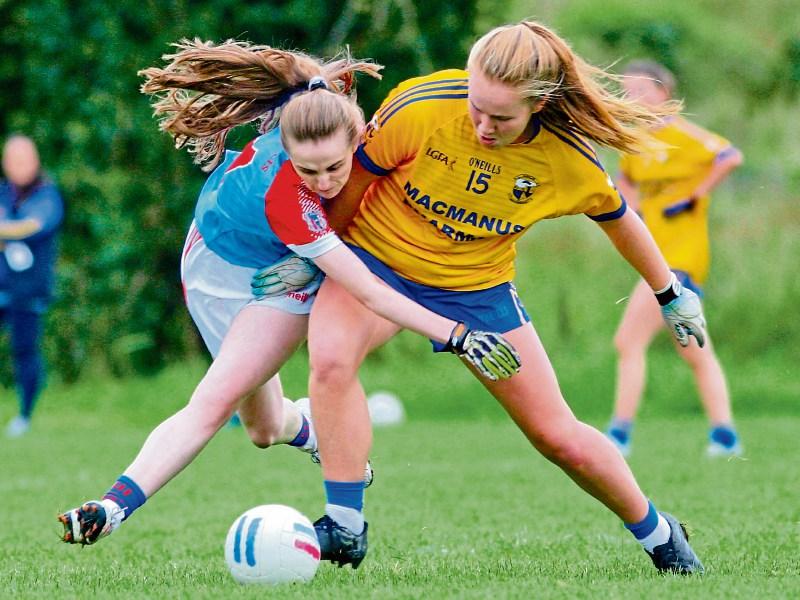 After being given a good run for their money to overcome Kiltubrid in the first round, champions Glencar Manorhamilton really stamped their class on the Gotham Dry Wall LGFA Senior Championship when they scored a runaway 20 points win over Division 1 champions St. Francis on Sunday at Boggaun.

St Francis went into the game in confident form and good move but their performance fell far short of their League form. Admittedly Glencar Manor had one of their strongest sides on duty for this outing but the failure of St. Francis to provide a meaningful challenge at any stage was still quite puzzling.

A few of the St. Francis players did everything in their power to put it up to Glencar Manor but the majority of their team mates certainly failed to do so. It is hard to know what the reason for this on the part of these St. Francis players was; but perhaps they seemed to be overawed by Glencar and failed to perform on the day.

Muireann Devaney set the game’s agenda as early as the second minute when she fired to the St. Francis net from close range and from then on Glencar Manor completely overpowered the Drumshanbo and Ballinaglera side.

Over the next 12 minutes Glencar Manor surged forward in waves and added an unanswered 1-3 to their tally before the game’s first water break. Leah Fox rifled home a second goal while Ailbhe Clancy hit over two points and Devaney added a point, to put their side ahead by 2-3 to 0-0 ahead.

After the water break, Clancy increased Manor’s advantage when she fired over a 21st minute point. Three minutes later St. Francis had a let off when Dearbhla Rooney blazed a goal chance inches wide.

A minute later St. Francis goalkeeper Michelle Monaghan made a good save when she deflected out a Leah Fox pile driver, which rebounded to Muireann Devaney who fired over.

Ciara Reynolds did eventually get the score board ticking over for St. Francis when she converted a 26th minute free. Before halftime Leah Fox stretched Manor’s lead when she hammered home her second goal of the half, when following a point attempt that she had just made came off the upright and rebounded to her.

Glencar Manor led by 3-5 to 0-1 at the interval. All in attendance who were hoping for some signs of resurgence in the ranks of the St. Francis side during the early second half exchanges were deeply disappointed as they failed to materialise, and especially after Aoife Gilmartin and Muireann Devaney increased Manor’s lead with point apiece by the 36th minute.

Sub Sadhbh Sweeney responded with a St. Francis point but sadly for the visitors, this proved to be their last score of the day.

Glencar Manor continued to power ahead and before the contest’s three-quarters stage was reached, Muireann Devaney fired home her second goal of the day after receiving a final pass from Leah Fox. Shortly afterwards Devaney added a point to put Glencar Manor ahead by 4-8 to 0-2 by the game’s second water break was called.

The final quarter turned out to be a something of a ‘going through the motions exercise’ with Ailbhe Clancy and Muireann Devaney adding a point each for Glencar Manor while Devaney sometime later allowed St. Francis to have a let off when she drove a goal chance narrowly wide.