St Joseph's right back into contention after brushing aside Kiltubrid 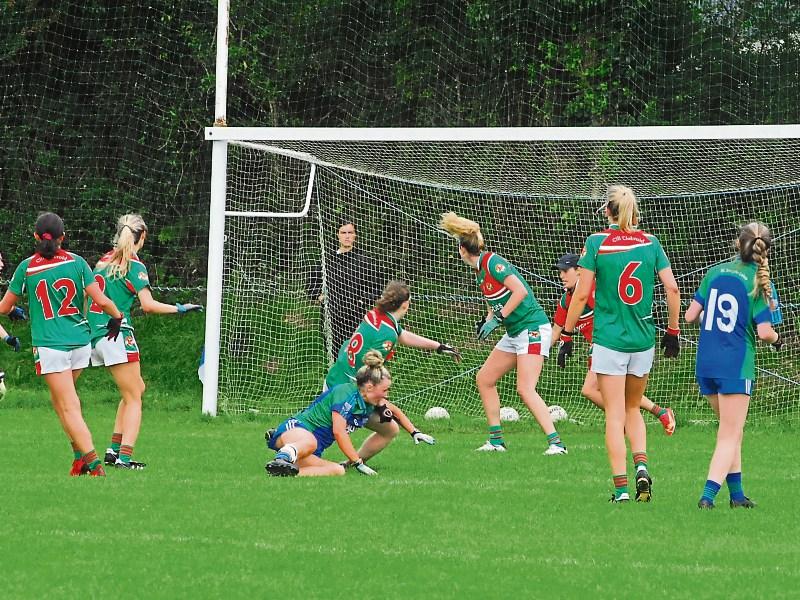 A grounded Shannen O'Rourke falls to the ground after taking as Kiltubrid players turn to see the ball on its way to the net Picture: Willie Donnellan

Any thoughts that St Joseph's were on the slide were emphatically answered last Sunday in Carrigallen as they overpowered Kiltubrid in the second half to win their first game in the Gotham Dry Wall Senior Championship.

After an untypically lack lustre display against Ballinamore in the first round, the Aughavas and Carrigallen produced a powerful display that wasn't fully registered on the scoreboard until the final quarter.

When the exceptional Michelle Guckian saw a fifty go straight to net nine minutes into the second half, Kiltubrid were just three points in arrears and seemingly right back in contention. But instead we saw a powerful response from St Joseph's as they put aside the malaise that affected them against Ballinamore to score an unanswered 3-4 to seal their first win of the campaign.

The first half was a strange affair with St Joseph's clearly on top but a battling Kiltubrid able to stay in touch thanks to Guckian's magnificent shooting from all range of distances and angles.

The opening exchanges saw Michelle Guckian burst forward from the throw-in to score but St Joseph's hit back with points from Michelle & Aine Heslin and Rachel McIntyre. Still two frees from Guckian had the scores level after eight minutes. Two fine points from Michelle Heslin, the second after a move started on the goal line, edge St Joseph's in front with the Leitrim player scoring again either side of two Guckian frees, one from all of 50 yards.

Aoife McWeeney became the only other Kiltubrid score on 21 minutes, set up by Guckian, to tie the scores but St Joseph's finished the half with a flourish with points from Michelle Heslin (2), Bronagh O'Rourke (2) and Celine Shortt with a Guckian point in reply. The crucial score came four minutes before halftime when a McGovern shot came off the post and McIntyre reacted to finish to the net. That left St Joseph's 1-11 to 0-7 ahead at the break and seemingly in control of the contest.

That quickly changed in the second half as Guckian scored a good point and then saw a fifty go all the way to the net. It didn't help that St Joseph's were now missing chances with Celine Shortt blasting a goal chance wide.

However, the home team steadied themselves when O'Rourke converted a free and Carmel McGovern scored her first of the game on 14 minutes. The water break saw St Joseph's in deep discussions and when they came back out for the second half, two quick points for Aine Heslin and McIntyre put them seven clear with just over ten minutes left.

Kiltubrid almost grabbed a second goal when Kiera Masterson left a dropping Guckian shot get away from her but she made amends by saving the rebound from Aoife McWeeney with eight minutes left in the game. It proved an important stop for St Joseph's completely killed off the game with three goals in the final seven minutes. A strong Aine Heslin run set up Rachel McIntyre for a good low finish to the Kiltubrid net, her reward being taken off a minute later!

Michelle Guckian continued to pepper long range shots into the Joseph's goalmouth but Masterson was steady under the ball and a long free over the top at the other end found Carmel McGovern in the clear, her superb chip over Emma Heeran finding the net.

Ellen Keaney was denied a goal by a good Masterson save and Shannen O'Rourke put the icing on a strong individual display and her team's performance when she combined with Celine Shortt and then saw her low shot evade everyone and keeper Heeran to end in the back of the net.

That was literally the final action as St Joseph's can now prepare for a meeting with St Francis next weekend where a win would guarantee them a place in the Senior B Semi-Finals while Kiltubrid take on County finalists Ballinamore Sean O'Heslins still seeking the win they desperately need.