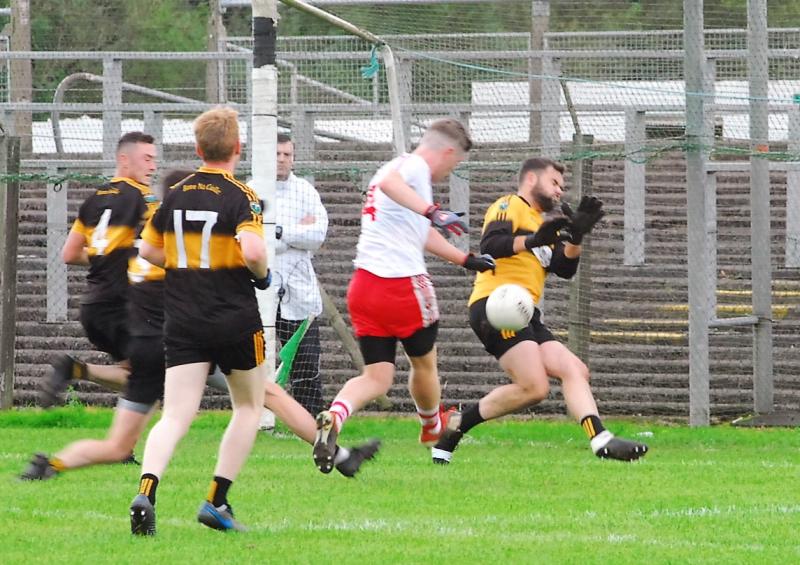 2020 finalists Annaduff and St Patrick's Dromahair the the first teams to book their place in the Smith Monumentals Intermediate Championship Semi-Finals but they did so in contrasting fashions with Annaduff prevailing in an exciting thriller against Drumkeerin while Dromahair simply had too much strength for Bornacoola.

There was also a major win for Aughnasheelin as they beat Carrigallen 1-16 to 1-10 in the Intermediate Relegation Final, a result that secures their championship status for next year but consigns Carrigallen to the Junior ranks in 2022.

Dromahair's clash with Bornacoola was the first clash of the Intermediate championship weekend and the north Leitrim men ran out convincing 1-18 to 0-10 winners. But it could have been much closer had Bornacoola not wasted a couple of clear goal chances while Damian Moran also saw a spot kick saved in the first half.

The first quarter was a tense affair with the sides trading point for point while it appeared Damian Moran was fouled as he bore down on goal. However, Bornacoola did get what appeared to be a soft enough spot kick when Sean McKeon's effort was blocked by a defender. McKeon appealed for a footblock which referee Enda Egan awarded.

However, Dromahair keeper John McGoldrick saved Damian Moran's tame effort and four late points from Martin Feeney, three from frees, gave the north Leitrim side a 0-9 to 0-5 halftime lead. Sub Gary Fowley gave Dromahair a huge advantage when he reacted superbly when a Feeney shot rebounded off the crossbar to find the net just four minutes into the second half.

Bornacoola almost replied with a goal but McGoldrick made a wonderful save, diverting Damian Moran's powerful shot onto the crossbar with Sean McKeon pointing the rebound. Bornacoola had a further goal chance but David Mulligan blasted wide and Dromahair were able to see out the game comfortably for a ten point victory.

The second game in Avant Money Pairc Sean Mac Diarmada was easily the most entertaining of the knockout games so far as Annaduff prevailed by the narrowest of margins against Drumkeerin, their 1-12 to 1-11 win secured with a Sean McNabola free just over two minutes from the end of normal time.

Both sides will look back on this entertaining if error prone encounter with the feeling they could have done much better. Drumkeerin had two chances from placed balls in injury time to force extra time but one went wide and one dropped short but Annaduff had a few chances to kill off the game beforehand.

This was a real championship encounter with both teams attacking with intent and contesting every ball as if their lives depended on it. Drumkeerin held a 0-7 to 0-5 lead at halftime but Annaduff's introduction of Ray Cox after the break proved to be the match winner, the veteran winning frees and landing two scores himself.

Annaduff looked on the road to victory when County star Conor Reynolds blasted home on 41 minutes but a superb finish from Darragh Flynn five minutes later had the teams level at 1-10 apiece. The final quarter was tense and replete with chances from both sides that should have been converted.

Conor Reynolds edged Annaduff in front, David Feeney replied for Drumkeerin but McNabola capped off another strong outing with the match winning free.

Sunday sees the remaining two quarter-finals with Ballinaglera taking on Drumreilly in the first game at 1pm while Aughavas face Kiltubrid in the final game at 4.30pm, both games taking place in Avant Money Pairc Sean Mac Diarmada with the draw for the semi-finals taking place after the second game.