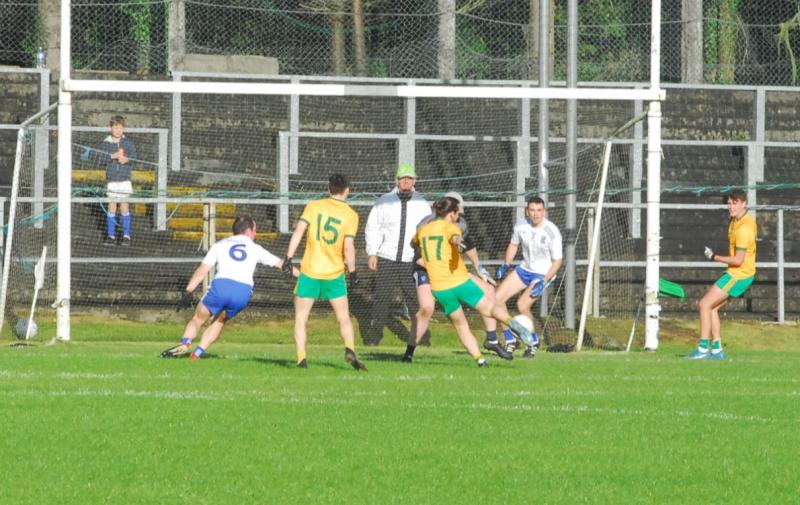 Ballinamore's Mark McGrory fires the ball to the net for his team's first goal against St Mary's Picture: Willie Donnellan

Led by a superb Tom Prior and three goals from Mark McGrory, Ballinamore Sean O'Heslins marched into their second Connacht Gold Senior Championship Final in three seasons when they crushed the challenge of an outclassed St Mary's Kiltoghert on Saturday in Avant Money Pairc Sean Mac Diarmada.

A devastating second quarter that saw Ballinamore turn a two point lead at the water break into an insurmountable 2-9 to 0-4 lead at halftime finished this game as a contest as Dominic Corrigan's side bossed this game in every sector of the field, once they got over a slow start that saw the 2020 County finalists St Mary's take a two point lead.

With the already mentioned Tom Prior repeatedly punching holes in the Carrick rearguard and Mark McGrory showing great goal poacher's instinct, all tension in this game had dissipated long before the final whistle with fans leaving with about ten minutes to go as Ballinamore put on an exhibition.

In what was their best display of the year, Ballinamore feasted on the St Mary's kickout, scoring 1-3 off four consecutive kickouts in just two minutes, kickouts that were gobbled up by a ravenous middle sector of the field. Dominic Corrigan's side made sure they made the most of their dominance and were it not for two wonderful saves from Sean Reynolds, it could have been much, much worse for St Mary's.

After a good start, the Carrick men were outmuscled and outharried by a Ballinamore side who really grew into the game and looked in a different class on the day. Whether that was due to a woefully subpar display from St Mary's or a superb performance from Ballinamore is hard to know - it was probably a bit of both but there is no doubting that Ballinamore were simply operating on a different level.

Ballinamore will head into a County Final against either defending champions Mohill or Leitrim Gaels in good spirits, knowing they are hitting top form at just the right time and on this form, nobody will like taking them on.

Ray Mulvey opened the scoring on four minutes, the ball coming back after a block on a Cian Singleton shot although it appeared as if the defender got away with a pick-up. Ballinamore went straight down the field with a fabulous move that was only denied the ultimate reward when Sean Reynolds brilliantly saved Senan Harte's shot.

Ballinamore were starting to look ominous with points from Tom Prior and Paddy Connaughton with Robbie Lowe scoring an excellent effort from the 21 yard line on the right wing.

A rattled Reynolds hit a poor kickout and it was promptly returned for a Luke Murphy point. The next kickout was fielded by Wayne McKeon in isolation and his pass was gathered by McGrory who claimed a mark that he converted. It could have been worse as another quick turnover saw the ball fed in to Prior but the keeper made a superb save to deny the goal.

Luke Murphy added a free on 23 minutes and three minutes later, Ballinamore killed off the game but this time off their own kickout! Darren Maxwell's long kick was brilliantly fisted by Shane Moran on to an unmarked Tom Prior. The County man advanced, found Mark McGrory and he finished expertly to the net from close range.

Ballinamore's dominance was emphasised when full-back Oisin McCaffrey joined in, getting onto the end of a patient move to fire over from distance. Mark Diffley pointed from a fifty in added time to leave Ballinamore Sean O'Heslins with a commanding 2-9 to 0-4 halftime.

St Mary's brought on Adam Reynolds & Daire Farrell for the second half and they opened with an Alan Doherty free but Ballinamore quickly replied with points from Luke Murphy (free) and Prior, Prior breaking through two tackles to fire over.

John Connolly takes a look ahead to Saturday's Connacht Gold Senior Semi-Finals and thinks, despite all signs so far, we're going to be in for two close encounters

Any faint hope St Mary's might have harboured was snuffed out when Paul Keaney was black carded for obstruction of Shane Moran on 37 minutes. Niall McGovern and Prior both added a point each and when Ballinamore broke through on goal on 14 minutes with three attackers facing the keeper and one defender, Mark McGrory completed his hat trick but not before hitting the post with his first effort.

Robbie Lowe scored from distance on 15 minutes but after the water break, Paddy Connaughton replied for O'Heslins. St Mary's would add three points from frees before the final whistle from Doherty (2) and Ray Mulvey with Dean McGovern completing the 15 point rout for Ballinamore.