John Connolly takes a look ahead to Saturday's Connacht Gold Senior Semi-Finals and thinks, despite all signs so far, we're going to be in for two close encounters 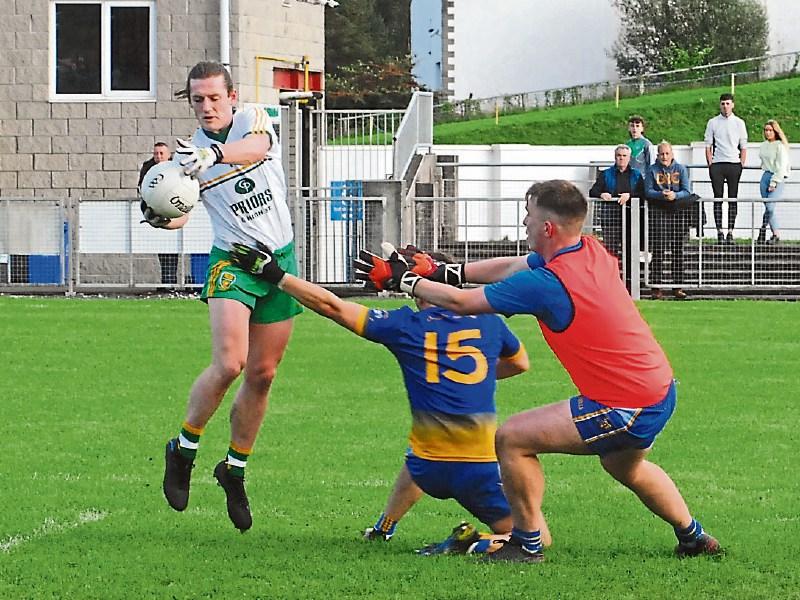 Mark McGrory in action for Ballinamore Sean O'Heslins against Glencar Manorhamilton - the Ballinamore men have a lot of strength off the bench Picture: Willie Donnellan

We’re down to the last four in this year’s Connacht Gold Senior Championship but if you talk to the average fans in Leitrim right now, you might as well hand the Fenagh Cup to Mohill right now such is their favouritism before a ball is kicked on Saturday.

How that makes the footballers of St Mary’s Kiltoghert, Ballinamore Sean O’Heslins and, more pertinently, Leitrim Gaels feel is anybody’s guess but in all my time covering the final stages of Leitrim’s premier club competition, I don’t ever think I’ve seen a team ranked as such hot as favourite as this Mohill team.

Their demolition of Gortletteragh in the quarter finals only underlined what the remaining teams must do to cause a sensation. But there is freedom and liberation in the fact that Liam Keenan’s men are such overwhelming favourites, meaning any expectations and pressure is utterly absent for the challengers.

Leitrim Gaels are first up to face the Mohill beast - beating Fenagh is a huge milestone and they have nothing to lose in the semi final. Physically, they can match Liam Keenan's side and there is real talent in their ranks. Nobody will give them a chance but they have a boxer's chance of landing an unexpected knockout blow.

St Mary's stepped up a gear from previous outings in cruising past Aughawillan and you feel there is much more to come from them. But will it be enough to get past Ballinamore, whatever about Mohill? I don't know but Sean O'Heslins are the pick of almost everyone I meet as the one team with the personnel and talent to maybe shock the defending champions. We take a look at two games that I feel will be much closer than everyone expects and hopefully we neutrals will get matches worthy of the occasion: 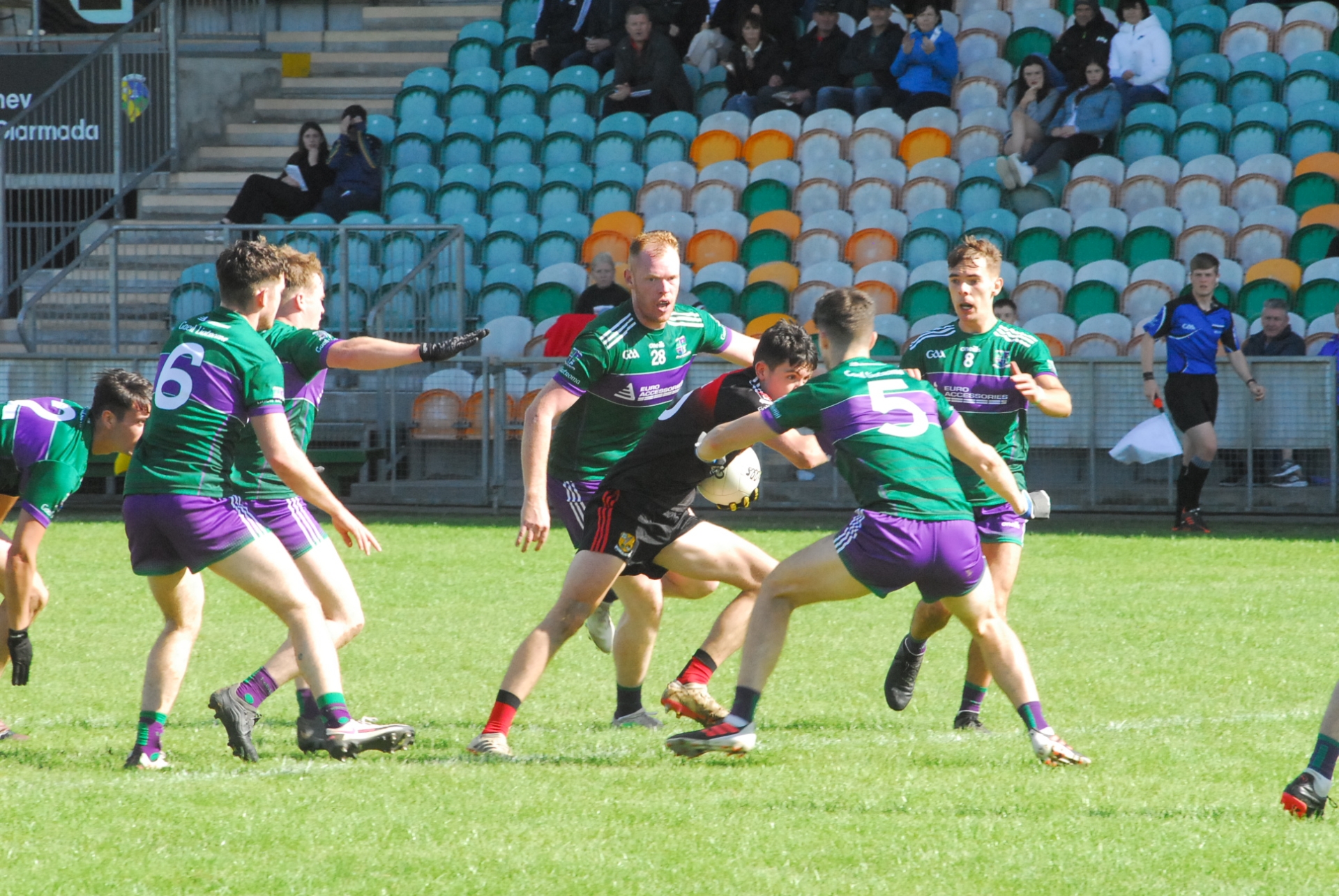 Action from Leitrim Gaels' victory over Fenagh St Caillin's - the underdogs will need to show this sort of intensity against defending champions Mohill Picture: Willie Donnellan

You only had to tell from the reactions in the stand in Pairc Sean when the draw was made that first time Senior semi-finalists Leitrim Gaels have been handed the draw from hell. Defending champions, League champions and a team went through the group stages with an average winning margin of just over 11 points a game - how, just how, do you beat Mohill?

That’s the question Paul Prior and Leitrim Gaels must come up with an answer to but how exactly do you solve this conundrum? Keith Beirne is the focus of much attention but do Leitrim Gaels have a player capable of locking him down - David Bruen looks the obvious choice with his pace and combativeness but would that rob the Gaels of Bruen’s ability to surge forward in support of their attack?

Aidan Flynn could do the job while you wonder would young Shane Finn have the physical strength to halt the Mohill man? And where does Liam Moreton fit into the defensive set-up now he is back from suspension.

But Mohill are far from a one man show and Jordan Reynolds continues to impress mightily, 2-5 against Gortletteragh but he will surely get much closer attention on Sunday. The Gaels will also have to watch the Harkins and the deep lying threat from Domhnaill Flynn, Keith Keegan and Shane Quinn - and we haven’t even mentioned Ronan Kennedy yet!

The Gaels approach would seem that bit easier to predict with the impressive Colm Moreton and Conor Guckian their foundation stone in the middle of the park but expect Mohill to test Moreton’s patience. Few can match the Gaels midfielder for power and aerial ability but his Achilles heel has been his discipline in the past.

Upfront, Enda Moreton is a genuine threat - good in the air, fleet of foot and with an eye for a score, Moreton will get good support from Stephen Goldrick and Aidan Flynn but Mohill’s Mitchell brothers, Oisin Madden and Alan Armstrong are all accomplished man markers, well able to snuff out any threat.

Mohill have the edge in strength in depth but starring while you crush a demoralised team is quite different from battling a team that won’t step back an inch. The Gaels will be that and more so the hope is that we are in for a ferocious battle on Sunday.

Look Mohill are red hot favourites for good reason and you don’t really expect anything other than a win for the defending champions. But if Leitrim Gaels can draw them into a battle in the middle of the field, clog up the supply lines to Keith Beirne and nick every chance that comes there way, you never know. But impossible to see beyond Mohill.

I don’t know what to expect here but if past meetings are anything to go by, we could be in store for a thriller. Neither side has been pulling up trees so far but they are in the semi-final with the prospect of taking on Mohill in a County Final very much on the cards, something they would have envisaged themselves doing all year.

First, they must get over each other but they come from contrasting places. Ballinamore have been there or thereabouts each and every year since 2017, considered among the favourites for the title but they’ve yet to get across the line. Physically and talent wise, they match up with anyone in the county - including Mohill.

St Mary’s are ahead of where I expected them to be - we all know that their underage ranks have been revitalised in recent years but nobody expected them to make last year’s final, particularly after losing their first two group games. But under Denis Connerton, they blossomed unexpectedly and I get the feeling that they are only approaching top form in this competition right now.

Ballinamore will take a lot from finally ending their Glencar Manor jinx but how much can we read into it? That was a shadow of the great Manor team and Ballinamore laboured in the first half against a team clearly struggling to match them physically. The question is has the victory liberated them from past traumas and inspired them for Saturday’s semi-final?

Hard to answer that one but you can’t doubt they have the talent and they finally seem to have found a more functional line-up with Tom Prior closer to goal and more central to their plans while they look more solid down the centre too. The unheralded Michael McKiernan and Senan Harte, along with Cathal McHugh, do a lot of the donkey work for their more famous colleagues but they’ve added a lot graft and hard work to this Ballinamore team.

St Mary’s lost an absolute legend in Jonathan Cassidy so they will want another of their greats in James Glancy fully fit for this test. But their emerging youngsters are a year older, a year stronger and, most importantly, a year wiser. None of them have sparkled quite like they did last year but they are getting the job done quietly and effectively.

The pace of Ray Mulvey & Nicholas McWeeney is a real weapon St Mary’s can exploit when they attack with pace but they displayed a hitherto unseen ability to hold onto the ball for long periods against Aughawillan and tap over scores - that could prove vital in a tight game.

The Carrick side have a good few options off the bench too but then so do Ballinamore, although both go into this game with a few injury worries. Who overcomes this factor will have a huge advantage.

These two teams fought out a thrilling high scoring draw last year and a repeat of that would be simply superb. However, with so much at stake, it probably will be a cagier affair and freetaking might decide the issue and you feel Ballinamore may have a slight edge in that department.

Most people I talk to are picking Ballinamore but not with any great certainty. I’ve got the inkling that St Mary’s are only hitting their stride now but the same can be said for Ballinamore. There are compelling reasons to back either team and it really good go either way but, if pushed, I’ll give a very tentative nod to St Mary’s.