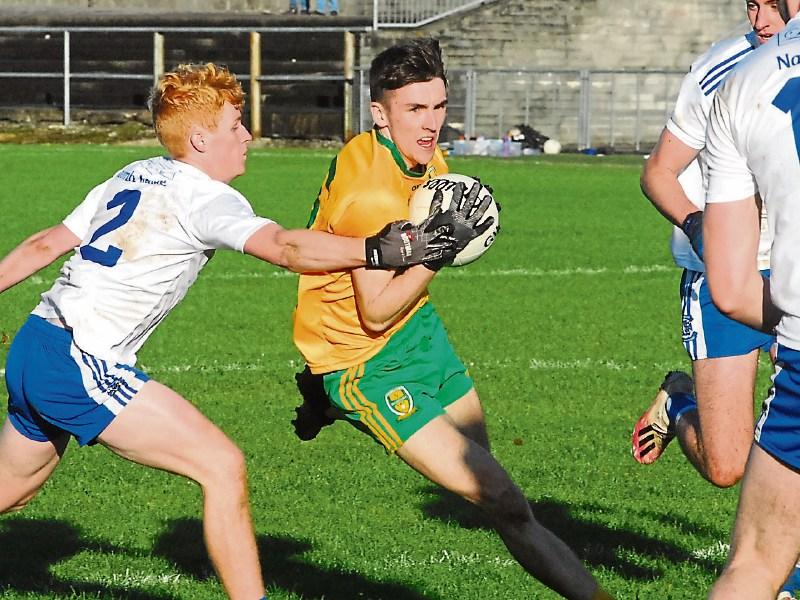 Tom Prior in action for Ballinamore Sean O'Heslins in their semi-final victory over St Mary's Kiltoghert Picture: Willie Donnellan

There’s a world of difference between winning and losing or, as Tom Prior puts it, “There’s no fun in losing” as he and his Ballinamore Sean O’Heslins teammates take on defending champions Mohill in next Sunday’s Connacht Gold Leitrim SFC Final.

The dichotomy of success and failure resonates with the Leitrim Senior & U20 star as he talked about his team’s 3-15 t0 0-9 victory over St Mary’s in the semi-final, the memories of Ballinamore’s County Final loss two years ago and the legacy the current generation of players have to follow.

“It just kind of clicked today and everything went right, it was just one of those days,” was Tom’s immediate thoughts on the semi-final, “Unfortunately for St Mary’s, it didn’t happen for them but we’re delighted to be back in the county final.”

Back to the County Final neatly segues into talk of the Final two years ago when, in Tom’s first year involved with the Senior team, Ballinamore lost a tight battle with Glencar Manorhamilton 0-16 to 0-15 and the memory still hurts!

“The hurt is still definitely there, hopefully we will go one step further this year. I can’t say I think about it all the time when you’re playing football but it will probably come up now and I’m sure all the talk will be about that. But we’re just focussed on Sunday, we can’t change what happened before and it is all about this Final.”

That applies to the rich and storied history of the Ballinamore club and Tom doesn’t believe it will play on his teammates’ minds: “We know the history that is there in the club but it is not about what’s gone before us, it is about this team. This team is a different team to two years ago, it is different to last year and it will be different again next year so it is just about doing it this year and going as far as we can.”

Ballinamore lost the first two games of the campaign but seem to be peaking at just the right time. However, Tom denies this was part of any great masterplan! “I think it was more the way it happened, I don’t think we’d be trying to lose the first two games now. There is no fun in losing, definitely. The hurt is there but it was a wake up call for us, we knew we needed to get better, needed to improve every time we go out on the pitch and I think we’ve done that since and will continue to do it.

“We’ve played Mohill in the League final and the group stages and they’ve beat us both times. Fenagh beat us the first day so we started off with two losses but since then, we’ve built a bit of momentum, momentum is a big thing in championship football and I suppose we’re just coming to the boil at the right time and hopefully it will continue next Sunday.”

Voted by readers of the Leitrim Observer on the Club Team of the Year last year, Tom has impressed in 2021 with Leitrim Senior and U20 teams but, despite the plaudits about his own form, he insists the game remains a team endeavour at its heart and it is not about him.

“It is an honour to be on the County team and to be playing for Leitrim but when you come back here, nobody treats you differently, it is the exact same. It is a team game, you saw it there today, I don’t know how many lads go on the scoresheet but right from the backline all the way up, it is definitely not a one man game.

“It is all about the team and we had a good team performance. I have Mark there beside, the last day he scored two goals and I think he got all three there today so he is doing some scoring but we don’t mind who is doing the scoring, once we get across the line.

Nevertheless a switch into the full-forward line seems to be paying dividends and Tom admits his delight at the switch, but not the reason you think: “It is a lot less running so I’m happy with that,” laughs Tom, “I don’t have to do the 100 yards up the pitch! Covering back doesn’t have to be done as much, I’d be trying to miss out on the runs back.”

Tom might be tender in years but you sense there is a wise head on his shoulders as he contemplates how he and his Ballinamore teammates will prepare ahead of the Final: “The same as we have the last six weeks. It is another game - there might be a bigger game and the auld band before it but we’ll prepare as we have to.”