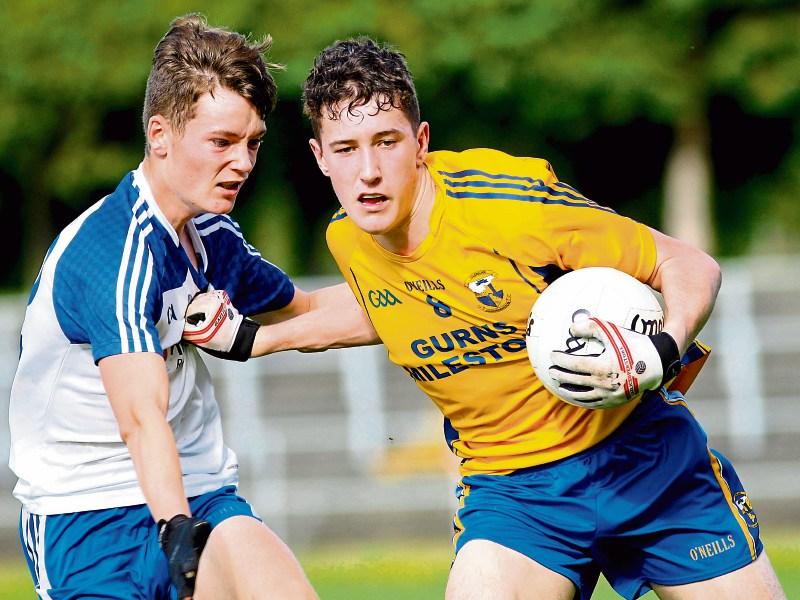 The simple story of this game is that St. Mary's ruled the roost in the first quarter and Glencar Manor successfully battled in the next three quarters of the action to turn the tables on their rivals whom they still only managed to overcome by just a two point's margin at the heel of the hunt.

St. Mary's got off to a dream start and they continued to outplay Glencar Manor with a very impressive brand of football in virtually every sector of the field in the opening quarter and it was no surprise when the Carrick boys found themselves comfortably ahead by 2-3 to 1-0 when the game's first water break arrived.

Brian McKenna put St. Mary's ahead when he fired over a first minute point and Jack Casey followed with a well taken goal four minutes later after being put through by Brian Keaney. The lively Josh Maye increased St. Mary's lead with a well executed eight minute point. Jack Casey struck for his second goal after Dean Earley provided Casey with a final pass.

Glencar Manor who hand been under the cosh for most of the first quarter got their account opened eventually when Tarach Ó'Snodaigh flicked a 12th minute high dropping ball into St. Mary's net.

In reply Josh Maye popped over his second point for St. Mary's point to put his side ahead by six points at the end of the first quarter. Glencar Manor eventually got to grips with the St. Mary's challenge and began to turn the tables on their rivals who they held scoreless until halftime

The Glencar Manor fight back was initiated when Barry McNulty pointed a 40 metre free after Jack Kelly was fouled. Over the next three minutes McNulty and Dylan McDermott fired over a point apiece to narrow the gap.

A Jack Kelly point left the visitors just three points adrift at the interval when St. Mary's led by 2-3 to 1-4 and after the resumption, Glencar Manor continued to dictate matters when getting on level terms and then they went on to grab a two point lead by the 34th minute.

Cian McManus pointed a 20 metre free and Barry McNulty hit over a levelling point. Another McManus free conversion put Glencar Manor ahead for the first time in the game with Barry McNulty doubling his side's advantage.

When Dean Earley fired home a well worked 35th minute goal, it appeared that St. Mary's, who had just regained the lead, had also once again recovered their composure. Ben Guckian increased St. Mary's lead with a 41st minute point.

St. Mary's goalkeeper Niall Keaney saved well to deny a Gabriel Gilbride goal chance but Barry McNulty made amends for the north Leitrim side when he fired over points from a free and play, to level matters for the game's second water break.

When the game's final quarter action got underway the fat was certainly in the fire and St. Mary's had a 49th minute let off when Ó'Snodaigh blazed a goal chance inches wide. Shortly afterwards Cian McManus tapped over a free to put Glencar Manor ahead.

Another McNulty free gave Glencar Manor a two point cushion. That lead was reduced to the bare minimum when Jack Casey's well struck free sailed between the uprights.

The game was now on a knife-edge but Barry McNulty made the outcome more secure for Glencar Manor when he fired over a 58th minute point. In the remaining minutes of the action St. Mary's battled gallantly to overturn the tables on the North Leitrim rivals.

However Glencar Manor held steadfast in this crucial phase of the game when spectating supporters of both teams were all on the edges of their seats, as they anxiously awaited the winner of this thrilling contest.