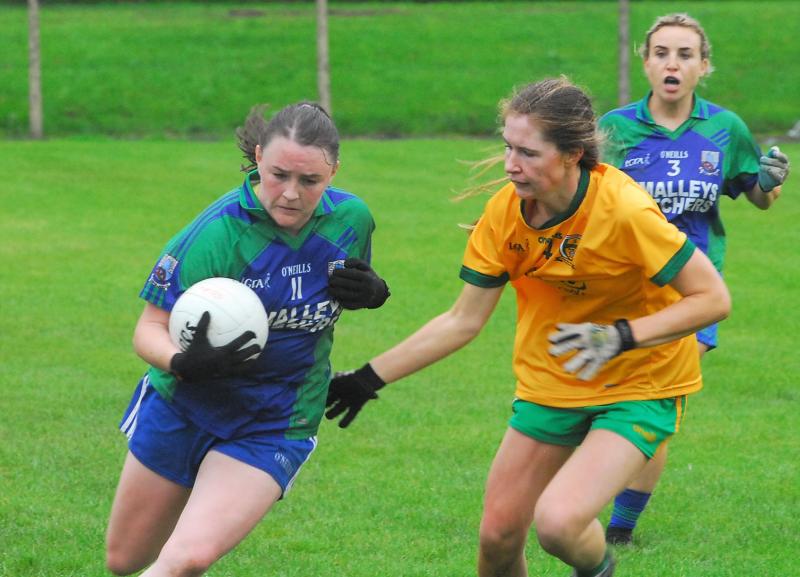 Defying the odds, their underdogs status and a host of injured players, St Joseph's produced their best display of the year when they overwhelmed Ballinamore Sean O'Heslins everywhere but on the scoreboard in Saturday's Gotham Dry Wall LGFA Senior B Final in Cloone.

Inspired by Player of the Match Carmel McGovern, the intensity and workrate of an inspired St Joseph's knocked a Ballinamore side, who defeated them by eight points in the very first round of the championship, completely off their stride and there was no doubting who were the superior side in Cloone, an injury time penalty putting a gloss on the scoreline.

Players went down injured, turned ankles, were clearly carrying knocks but you wouldn't have thought that St Joseph's were the underdogs as they outfought and outplayed the Ballinamore girls who never got going at all, save for one or two bursts where they threatened to take control of the game.

But each time they did, St Joseph's wrestled control of the game right back, most notably when Emma McGovern finished off a wonderful Ballinamore team move to the St Joseph's net with less than 14 minutes left on the clock. That left the sides level and when Ballinamore missed a chance to go in front, it was then that St Joseph's showed all their know-how and experience to seal their victory.

Two points apiece from a clearly hampered Michelle Heslin and two fabulous efforts from McCartan opened up a four point gap and despite a late penalty from Roisin McHugh finding the net, it was St Joseph's who were celebrating when referee Vincent McMorrow sounded the final whistle immediately after the spot kick.

Ballinamore may be aggrieved that they didn't get the chance to force extra-time but if anyone was ruing missed chances, it was St Joseph's who were by far the most wasteful side over the hour. St Joseph's had 11 wides over the hour and dropped two more short while Ballinamore had just the four wides but saw two shots saved well by keeper Kiera Masterson. 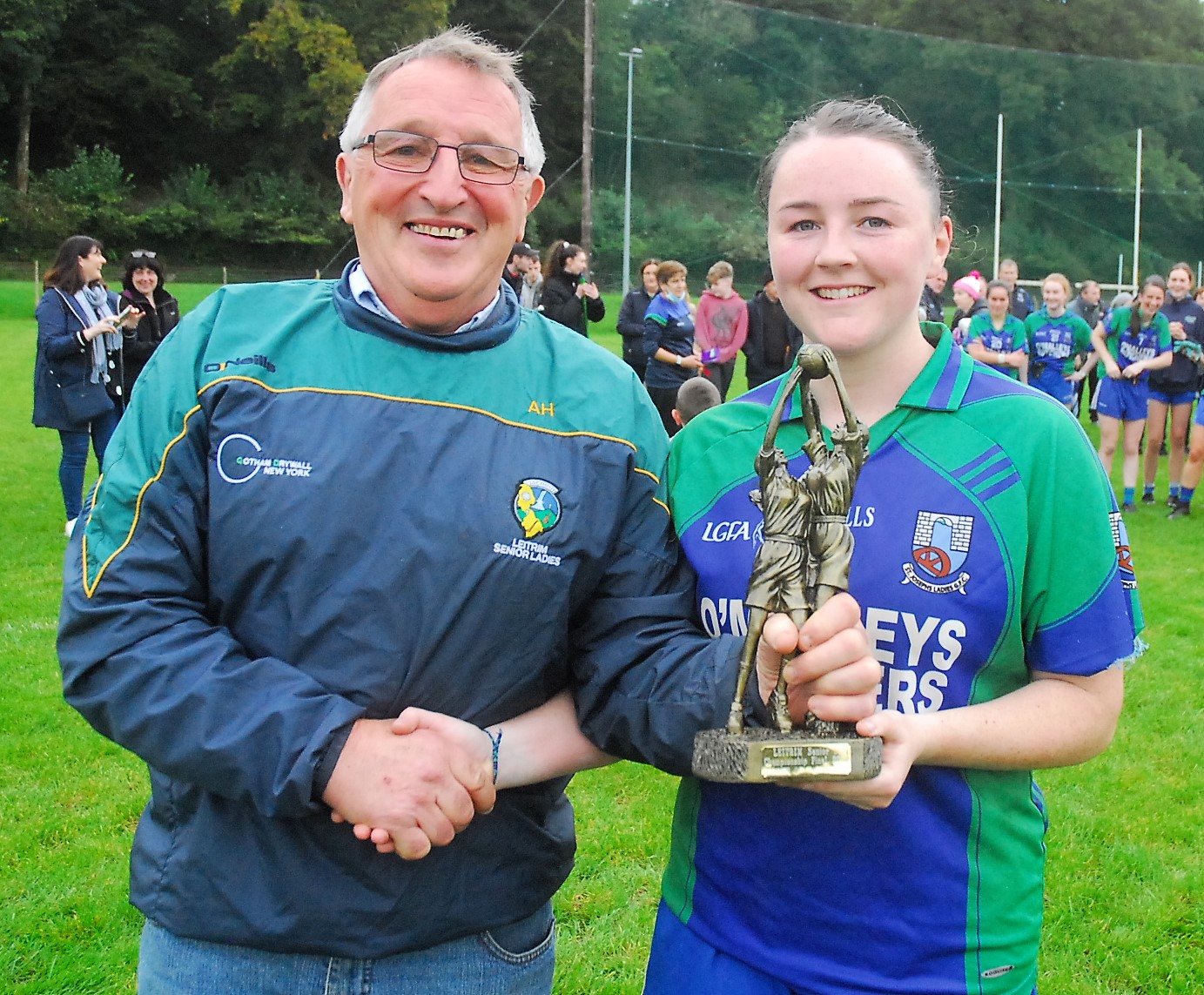 Player of the Match Carmel McGovern is presented with her trophy by Aidan Heron Picture: Willie Donnellan

O'Heslins never found their rhythm on the day as St Joseph's did a masterful job in keeping Laura O'Dowd, Roisin McHugh and Emma McGovern quiet. Any time they did escape their attention, scores came Ballinamore's way but generally, they were unable to break down a resilient and well organised St Joseph's defence where Vanessa Gallogly, Siobhan McCartin, Shannen O'Rourke and Marina Gray were outstanding.

Upfront, Carmel McGovern was outstanding as her pace and ability to keep Ballinamore's defenders on the back foot paid huge dividends for St Joseph's while Bronagh O'Rourke was also another major contributor.

St Joseph's now face Glencar Manorhamilton in the Gotham Dry Wall Senior A Final next Saturday, October 23, in Ballinamore at 3pm and while there may well be justified celebrations in the camp, from talking to anyone involved with St Joseph's, their eyes are firmly set on Glencar Manor's crown!

St Joseph's got off to a blistering start with Siobhan McCartain pointing after less than half a minute and when Carmel McGovern burst through to fist the ball over the bar less than a minute later, they were off to a flyer. From the kickout, McCartin won possession, the ball was fed to Bronagh O'Rourke and once again the ball flew over the bar.

St Joseph's showed they know how to work a score as they created the space for an unmarked Michelle Heslin to fire over for their fourth score inside three minutes. Niamh Donohue converted a free a minute later and when Michelle Heslin put a free wide, Roisin McHugh almost made their pay when she blocked a clearance from Kiera Masterson but drove her shot over the bar with the goal at her mercy.

Donohue added a free on eight minutes and suddenly there was just a point in it and St Joseph's must have been getting worried as O'Rourke dropped an effort short and they had four wides in as many minutes. However, all their worries disappeared when a mishit shot seemed easy work for the Ballinamroe defence on 16 minutes.

Unfortanately for the defender, the ball escaped her grasp and ace poacher that she is, Carmel McGovern nipped in to get a touch to send the ball screwing into the corner of the net and suddenly there was four points between the teams. Aine Heslin and Megan McGovern swapped scored before Kiera Masterson made a vital save from a goal bound Laura O'Dowd shot after a good Ballinamore move.

Ballinamore, however, finally seemed to be stirring - McHugh put a free wide but from a quick sideline, Megan McGovern scored from distance on 20 minutes and her sister Emma finished off a great move to leave just two between the teams. But St Joseph's weathered the storm and when Bronagh O'Rourke penalised over-carrying with a successful free, they went three clear again. 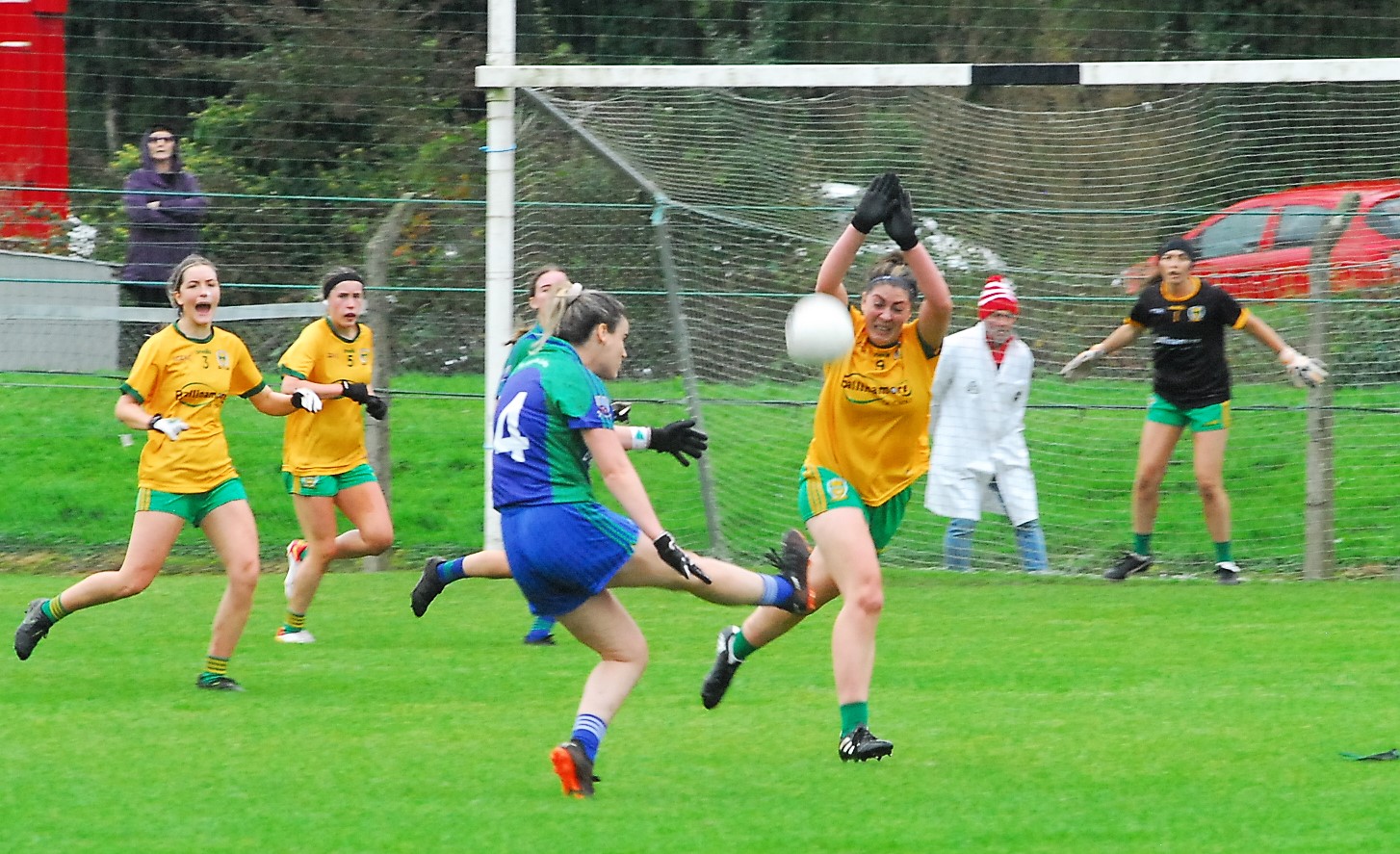 Shannen O'Rourke produced a wonderful finish after escaping some close attention when she looked bottled up before a Clare Owen turnover led to a great point from O'Rourke. A stunned Ballinamore stopped the rot with a fine Roisin McHugh point after a great run but points from McGovern & O'Rourke gave St Joseph's a commanding 1-10 to 0-7 halftime lead.

Another O'Rourke free left seven in it immediately after halftime but Ballinamore showed their resolve but it took them time to get going. Masterson did well to bat out a dangerous Megan McGovern shot and sub Aoibheann Flynn took a good point after a well worked move on 38 minutes.

With St Joseph's missing more chances than Ballinamore, they seemed to be in control but the game took a wild turn in a mad two minute spell. First Roisin McHugh was brilliantly alert to sneak in ahead of defender and keeper to fist the ball to the net on 14 minutes, reducing the gap back to a goal.

Carmel McGovern missed the chances to extend St Joseph's lead and when Laura O'Dowd caught Sarah McLoughlin's kickout on 16 minutes, a slick passing move involving Megan McGovern and Aoibheann Flynn ended with Emma McGovern found inside the St Joseph's cover and despite Masterson's best efforts, she fired to the net to tie the scores.

Ballinamore could have gone in front - a Roisin McHugh free went off Aine Heslin for a fifty but they couldn't make it tell and St Joseph's hit back with a brilliant Michelle Heslin point on 48 mintues. Masterson then did extremely well to bat out a McHugh free that threatened to drop into the net.

Another patient well worked move ended with Michelle Heslin firing over from distance and when Carmel McGovern curled over a superb effort with less than five minutes to go, the title looked destined for St Joseph's. Crucially, McGovern added another brilliant score a minute later to put her team four clear.

Ballinamore never gave up and they forced one late goal chance when Megan McGovern's shot appeared to be foot-blocked. It led to a yellow card for Louise Maguire while her corner-back colleague Marina Gray went into goal to face Roisin McHugh's spot kick. That switch didn't work for St Joseph's as the ball found the net but they need not have worried as the final whistle sounded seconds later. 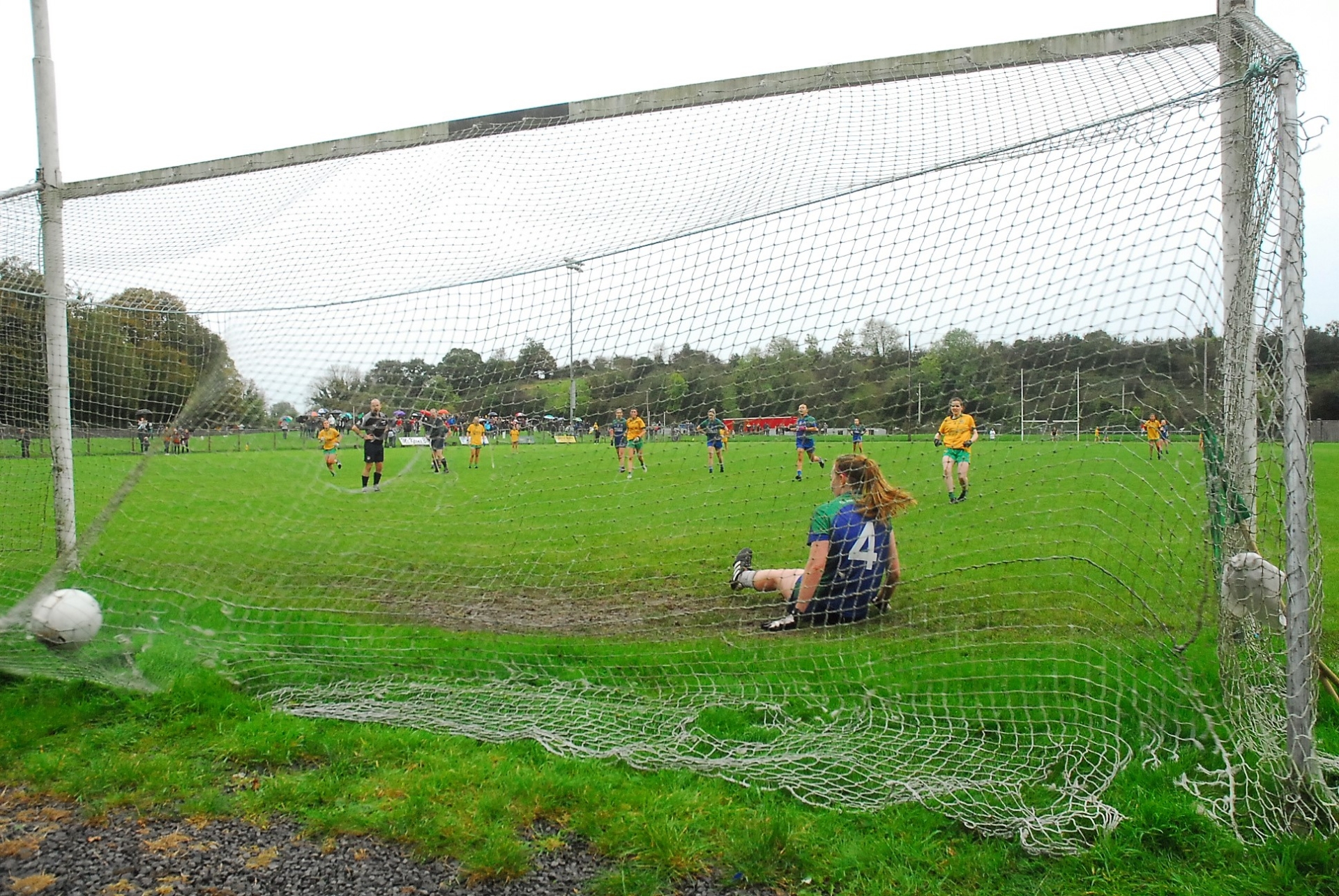