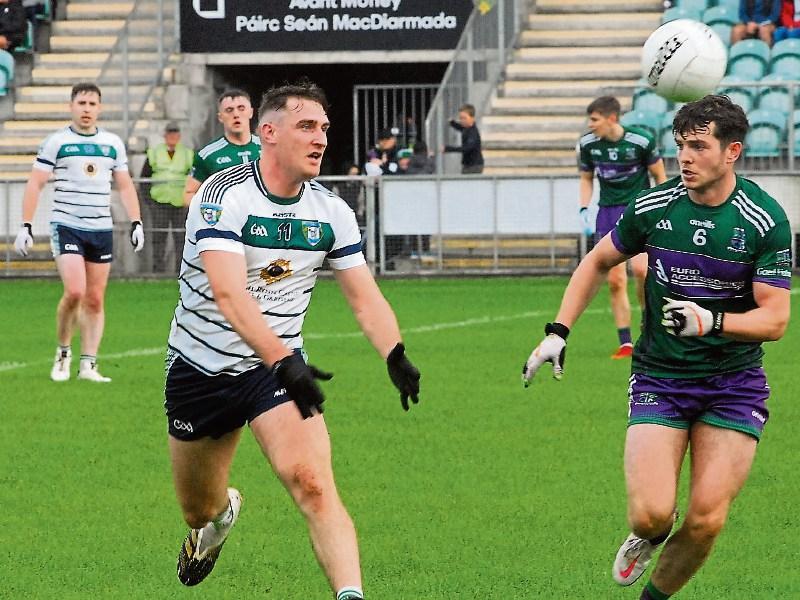 As statements of intent go, don’t think you’ll find a better one than that of Keith Beirne as he discusses Mohill’s ambition to make history by retaining the Fenagh Cup for the first time. As targets go, it is hard to beat but for Keith and his teammates, winning Sunday’s highly anticipated clash with Ballinamore Sean O’Heslins in the first and only aim.

“That’s what we set out to do at the start of the year,” said Keith after their bruising and hard fought semi-final victory over Leitrim Gaels, adding “In the County championship, the hardest thing is to get back to the final because, as everybody says, you need to be there to win it.”

The secret of Mohill’s unbeaten march to the final? As cliche as it sounds, it is simply taking each and every contest on its own merits, one game at time as Keith explains: “The big thing was to work on everything, we took every game as a barrier. The first three games were three-in-a-row, we played them so we’ve said we have another two with the quarter final to get here.

“Today was a massive day, big pressure, Leitrim Gaels were serious, they put us under a lot of pressure. Getting back to a County Final was the main aim so we’re delighted to be there.”

Mohill went into the semi-final as such red hot favourites that you almost feared they were being set up for a fall so much so that last year’s Final Man of the Match admitted that blocking out the noise was getting tougher: “It has gotten hard over the last weeks, especially winning well in group games and in the quarter-final.

“Everybody is bigging you and saying you should be walking away with it. But if you go out on the day and things start to go wrong - you drop a few balls, forwards kick wides, they kick a few scores - doubt sets in and pressure, you think we should be winning this handy and you’re not.

“We needed that after the quarter-final where Gortletteragh fell apart, we didn’t get any test so that was a serious battle and that will do well for us in the final. We have two hard weeks ahead of us to prepare for Ballinamore.”

Ah yes, Ballinamore - the teams have already met three times this season, Ballinamore winning the League game before Mohill won the Division 1 Final and Group game. So it is fair to say that Keith knows what to expect!

“Ballinamore are going to be serious, it is going to be some game. We played them twice this year, League final we scrapped it and championship we scrapped it, so they’re gunning for us. There is a lot of rivalry between us in these big games so we’re looking forward to it.”

Keith admitted surprise at the scale of Ballinamore’s victory over St Mary’s, something that also reinforced for him how big a threat Ballinamore pose! “It surprised everyone, we were all sure it would be a fifty fifty game because Carrick were going well, we played them in the final last year and they were a serious outfit.

“I praised St Mary’s last year saying they would be around this year but Ballinamore showed how good they are on their day and it is going to be a serious battle on Sunday.”

His county colleague Tom Prior has lit up the last few games for Ballinamore and it is fair to say that Keith is a fan: “Tom adds a big dimension to them because everybody thinks they are big fast high ball but this year, they’ve put Tom inside. I’ve worked with him with Leitrim and as a young lad coming in, you can see he is really talented with good hunger to get going.

“He gives them that option of fast low ball and they have the big men for the high ball so they really have added another dimension.”

As for his own form that saw him score 13 points in the semi-final to go with a barrage of scores all Summer, the first thing the Mohill man mentions was his misses against Leitrim Gaels: “I missed a few early on, thankfully it came good in the end.”

The secret to his excellent form with Mohill and Leitrim in 2021? “I don’t know, after we won in 17, I took a Summer or two off to go travelling and stuff but we worked hard last year in Lockdown to go and win it and thankfully we kept going this year and we’re just delighted to be in the final.”