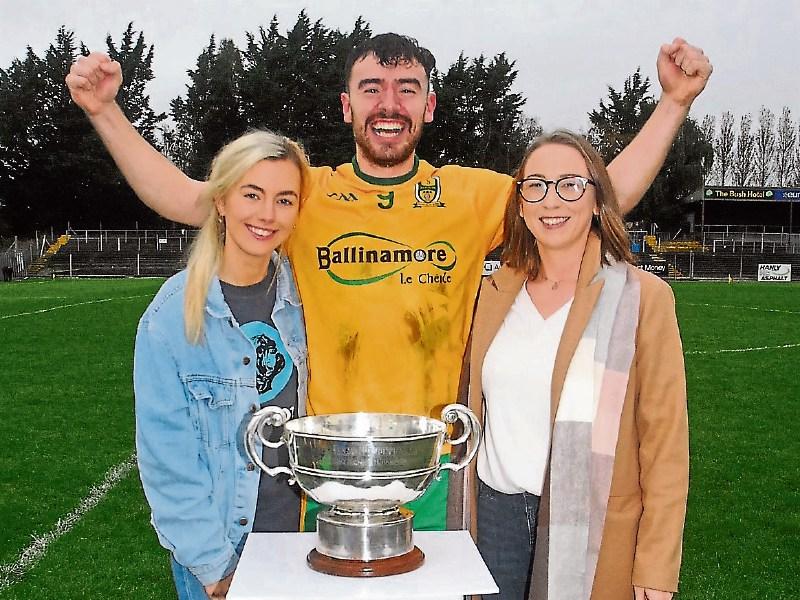 Safe to say Dean McGovern’s roars of delight captured the mood of every Ballinamore Sean O’Heslins supporter in Avant Money Pairc Sean Mac Diarmada last Sunday, but when it came to putting it into words, Ballinamore's captain admitted he was struggling to express what it all meant!

“I can’t even put it into words,” Dean told the Observer when we finally caught up with him after a whirlwind of interviews, photographs and congratulations, adding “We were real confident coming in here today that we could turn them over but the mind couldn’t even wander until after the final whistle.

“I just remember thinking ‘oh my God, this is brilliant’. You want to be out with your teammates but you’re being grabbed for presentations, I don’t know how to feel. It will take a while. I think when we get back to Ballinamore, we’ll know how it feels.”

Asked if finally ending Ballinamore’s long 31 year wait for the Fenagh Cup was everything he imagined, Dean said “I don’t even know what to say to that. You can see what it means to people here. We’ve worked so hard, we’ve trained so hard throughout this championship and I’ve no doubt that we deserved to get across the line.

“It is a weight off the shoulder but every year is different, every year different lads are gone. Donal Feely is over in Canada and he was the mainstay of our team two years ago, Senan came in off the bench, he was unfortunate not to start and kicked a great point to level it. Tom has been brilliant, Beezer has been a breath of fresh air, he is over and back that 45 line non-stop.”

Yet the next words Dean uttered underline the drive that pushed Ballinamore to the title as he was already setting his sights on the Connacht Club campaign: “We’re looking forward to five weeks time, that’s the next step so we will probably be back in training by the end of the week.”

Looking back on the contest, Dean revealed that Ballinamore took inspiration from Leitrim Gaels’ performance against Mohill: “It was a brilliant game today, I think they had three goal chances, we had three or four, it was quite 50-50 but when we play Mohill, it is all pretty much 50-50.

“Mohill are serious, everybody knows what they bring to the table and we knew we had to bring a serious performance too. We honed in on the Leitrim Village game because we felt that Leitrim had a lot of joy in the third quarter against them so we said to ourselves that if we could push it on.”

Indeed, Dean was so confident that when man of the match Wayne McKeon edged Ballinamore back in front, the Ballinamore captain was certain the Cup was on it’s way back to Ceannabo! “Wayne kicked a point to put us one up and when it went over the bar, I said we have this!”

Asked if he really felt that, he simply said “Oh yeah” before adding “We were getting in behind two or three times, we were making the runs and we weren’t being tracked a few times but thankfully Niall put it in the back of the net and that was it.”

Sunday’s win was a family affair for the McGoverns with Dean providing the pass for his brother Niall to find the net for the game’s crucial goal: “In fairness to him, he really turned it on today. It didn’t go for him in the first half but he just kept working and working and working and that is all we ask of every player on the pitch.”

The Men’s captain also had a few words for the club's Ladies team who lost their Senior B Final on Saturday: “At the start of the year, the Ladies were playing good football and we were playing poor football so it is funny how things go.

“There is a lot of crossover between the teams, they’ll take a lot of joy from us and hopefully we can all celebrate together over the next few days.”