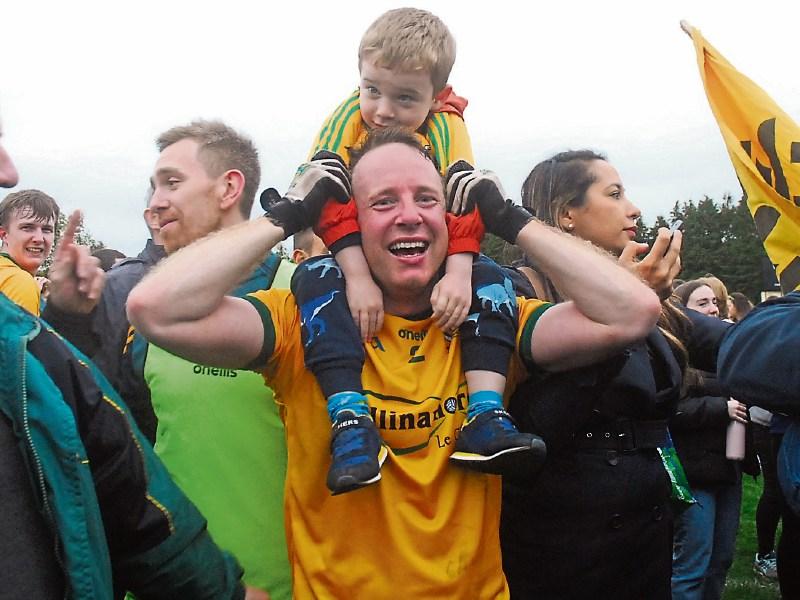 Ballinamore Sean O’Heslins may have just ended a long, long title drought but for long serving Liam Ferguson, a man who has endured the bad days as well as the good, last Sunday’s Connacht Gold Leitrim SFC triumph should be the start of a new dynasty for Leitrim’s traditional kingpins.

Typical of the man, Liam’s thoughts turned to his teammates, past and present, and the entire community in Ballinamore as the reality of what Dominic Corrigan’s team had achieved slowly started to sink in amidst the celebrations in Avant Money Pairc Sean Mac Diarmada.

“We’re carrying the jersey today,” stressed Liam, “We’re lucky enough to be in the position we are in but the victory is for everybody, for all those lads who were in finals in 1998 and different years, it is a full club effort. We’re the lucky guys to be out here today but it is for everybody and we’re just chuffed.”

It is that spirit of togetherness that Liam believes made all the difference for Ballinamore in 2021: “What’s on our jerseys today - Ballinamore Le Chéile - the town coming together and massive sponsorship coming in because everyone has good will for the town. There are good days and bad days with clubs but you get through it. Hopefully today is the start of a new chapter and a new dynasty, there is no reason why we can’t kick on and be here talking to you next year.”

To illustrate the point, Liam spoke of former teammate Anthony McTague who had hung up his boots but still met up regularly with Liam in Dublin to go for runs and help his former teammate get through the closed season training that has been doubly hard in these Covid times.

“We had a good preseason even with Covid, it was tough on our own but it stood to us there today and showed over that last seven or eight minutes, that’s thanks to the hard work Aidan Creamer our strength & conditioning coach put in and the hours of running we did on our own.

“It’s not pretty the roads of Dublin, they’re not as glamorous as people make out. Guys like Anthony McTague, who packed it in, used to go running with me and those lads were always there to support you and get you over the line and that’s part of the togetherness we have in the club.”

They certainly didn’t pick the easy route to the Fenagh Cup this year as O’Heslins lost their first two games in this year’s competition: “After we lost to Fenagh in the first round, everyone was writing us off but we met the next morning and Dom just said ‘lads it is the first round of the championship, I don’t want you peaking for another two months’.

“That’s why you have Dominic Corrigan as a manager and the management team is fantastic, all the boys so it wasn’t a case of worrying or getting too upset, we knew what our end goal was. We had a different focus this year but it has been a crazy journey really and I think the most important thing is that you’ve got to stay positive all through it.”

Looking back on the final itself, to win in the manner they did makes it all the more special for Liam: “It has been a long slog for us and just to get here, the fashion in which we did it as well. We remained composed for the whole game. We had a super first half, we stuck with Mohill, Mohill are a fantastic team.

“Keith Beirne is one of the best forwards in the country, kicking balls over left and right from all angles but we stuck to our game plan and huge credit must go to our management team. We had a set gameplan to stick to, we kept our heads. Second half, under a bit of pressure but we felt opportunities would come and to get that goal was amazing.”

Any talk of football in Ballinamore leads to talk of past greats and for Liam, it was wonderful to see so many past heroes on the pitch in Pairc Sean celebrating their success: “It means so much for the club, to see everybody lingering around here probably an hour after the game.

“It has been a long wait since 1990, to see Paul Kieran, Ray Logan, Joey, delighted. We wore the jersey today but it is for everybody, it is for the club, it is for the town, an amazing feeling.”