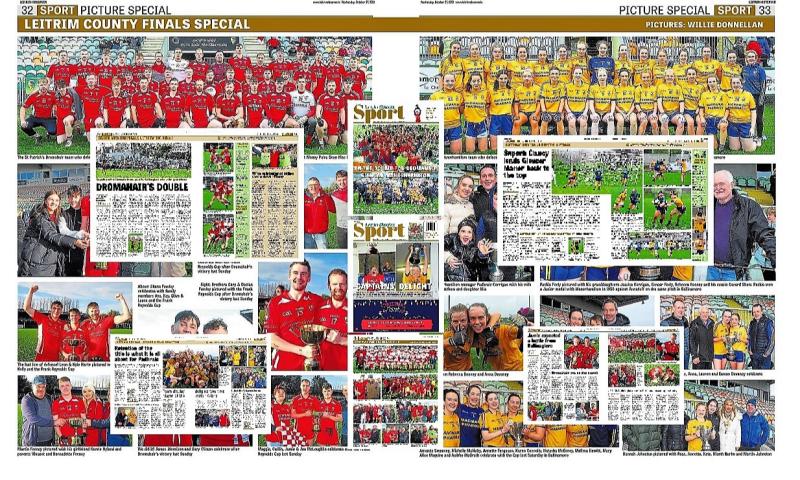 Another epic weekend of championship action is featured in a special 12 page supplement in this week's Leitrim Observer as we look back on St Patrick's Dromahair's victory over Ballinaglera in the Smith Monumentals Intermediate Championship Final while Glencar Manorhamilton claimed back to back Gotham Dry Wall LGFA Senior A Championship title.

We have produced a special 12 page pullout concentrating on the Smith Monumentals Intermediate Football Championship Final and the Gotham Dry Wall LGFA Senior A Final along with 11 more pages of sport after yet another action packed weekend of gaelic games action.

The celebrations are probably still ongoing but John Connolly gives his verdict on an intriguing Smith Monumentals IFC Final and the Gotham Dry Wall LFA Senior A Final with loads and loads of pictures from both Finals from our own Willie Donnellan as St Patrick's Dromahair and Glencar Manorhamilton celebrated their victories. You can check out Willie's gallery of photos at www.leitrimobserver.ie.

From Dromahair, we chat to captain Michael Clancy and man of the match Jamie Conlon to get their reaction to the 1-10 to 1-5 win over Ballinaglera while manager Padraig Clancy insists that Dromahair will be taking the Connacht Intermediate Club championship campaign very seriously.

Ballinaglera manager JP Kane reflects on missed chances costing his team last Sunday but stresses that Ballinaglera's run to the final has done so much for the community.

Glencar Manorhamilton retained their Ladies Senior title with a 2-8 to 1-6 win over St Joseph's and we hear from manager Padhraic Corrigan who stresses that the victory underlines the champions status as a great team while Player of the Match Ailbhe Clancy and captain Melissa Hewitt stress the team work that led the Manor women to the title.

We also report on Fenagh's high scoring victory against Annaduff in the Gotham Dry Wall LGFA Junior A Final and Carrick-on=-Shannon's victory over Cluainin in the Leitrim U17 Hurling Championship Final on Monday.

So make sure you get your copy of this week's Leitrim Observer - in shops every Wednesday.