Superbly drilled Dromahair too good for Ballinaglera who will regret misses 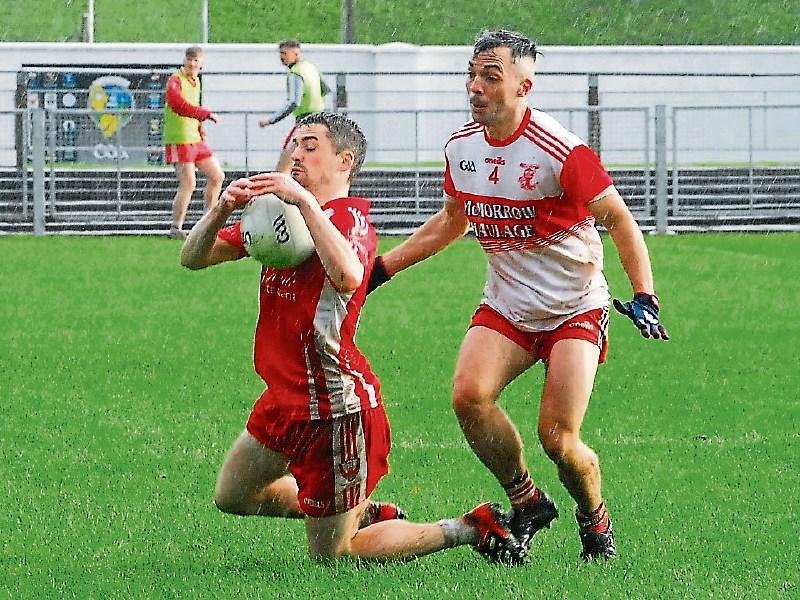 St Patrick's Dromahair made it an Intermediate Mens and Ladies double on Sunday when they proved too clinical and intense for Ballinaglera in a fascinating Smith Monumentals IFC Final in Avant Money Pairc Sean Mac Diarmada.

In a game shaped by the conditions, we had an intense, physical and thoroughly committed contest where Dromahair's greater organisation on the field came into its own as they exploited gaps in the Ballinaglera defence while denying JP Kane's team the momentum they needed.

Yet while almost everyone agreed that the better team had carried the day, it wouldn't have taken much for Ballinaglera to take victory as they missed good scoring opportunities at critical times on Sunday.

In fairness, Dromahair had done their homework well as they met Ballinaglera's fire with their own fire and then they had the patience and ability to spread the ball and work the sort of scores that Ballinaglera were just unable to match.

Many of us thought that Ballinaglera would hold the edge in physical stakes but Dromahair more than matched them, driving them back and forcing turnovers that led to crucial scores as they never let Ballinaglera build up a head of steam.

Both teams seemed nervous early on with Martin Feeney and John Crawford hitting wides but Dromahair suffered a major blow when Bertie Cunningham was forced from the game just four minutes into the contest with what was suspected to be a broken collar bone, James Morrison coming on. 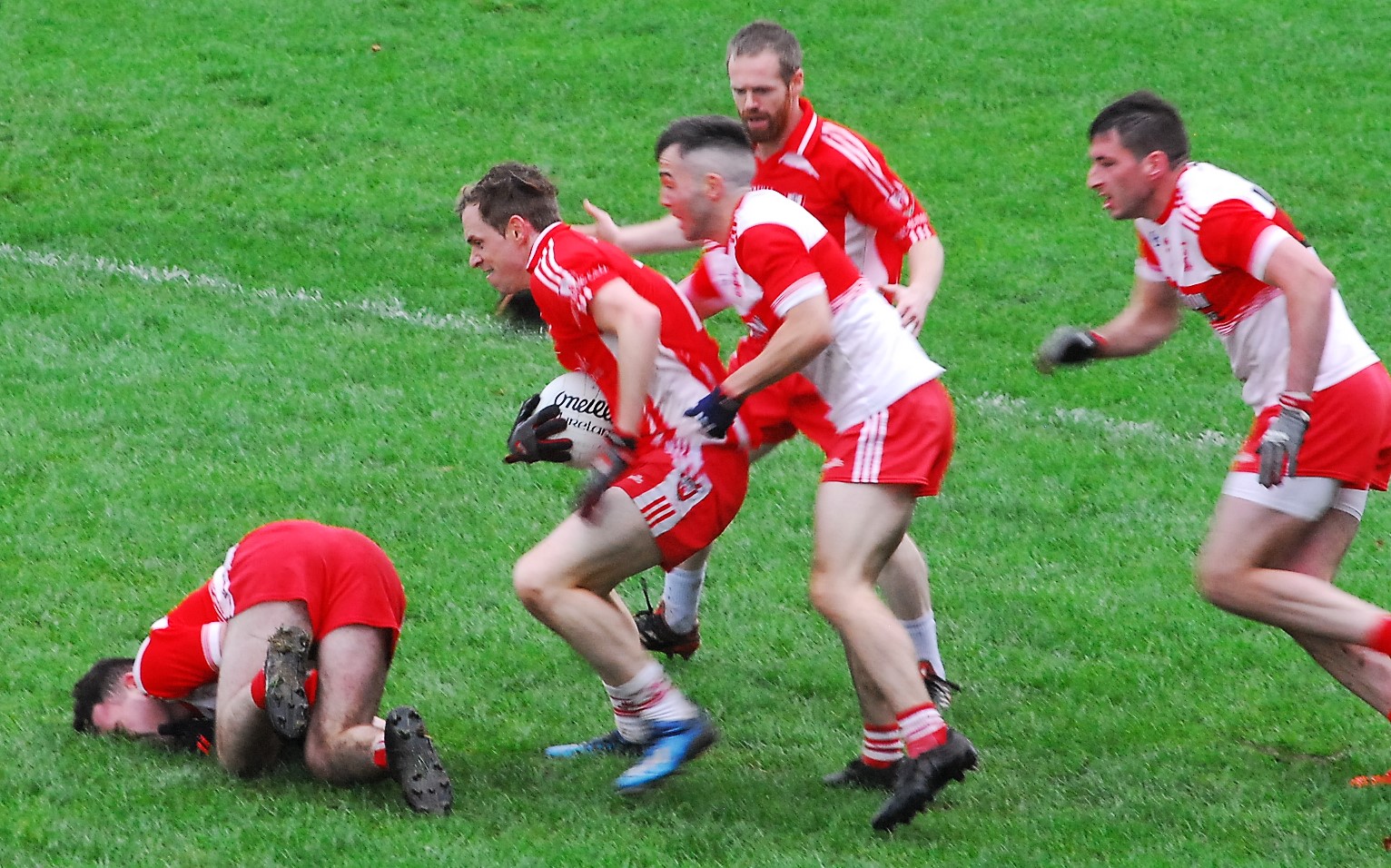 Martin Feeney opened the scoring from a mark, a good pass from Jamie Conlon finding him isolated and the feeling that Dromahair were settling best was magnified when they intercepted a sloppy Ballinaglera sideline ball, Declan Fowley delivered a long ball into the corner and Gary Fowley scored a fine point on ten minutes.

Seamie McMorrow punished a foul on Barry Maguire with an impressive 47 yard free into the wind at the town end to cut the gap to a point but when James Clancy forced another turnover, good work from captain Michael Clancy ended with Martin Feeney firing over his second.

Dromahair were starting to dominate and keeper Conor O’Brien did well to get a touch to a dangerous ball ahead of Gary Fowley but when Michael Clancy burst through to score seconds later, the gap now stood at three points.

It could have been four but Feeney saw a score chalked off due to obstruction of a defender trying to get at him to block the shot but Dromahair didn’t have long to wait when Jamie Conlon made a superb catch from a crossfield ball and fired over a wonderful point from distance.

At this stage, the weather conditions were going from bad to worse but Ballinaglera were beginning to work their way into the game. Unfortunately for them, Seamie McMorrow dropped a free shot and put another free across the face of the goal but converted a free after a foul on John Crawford. 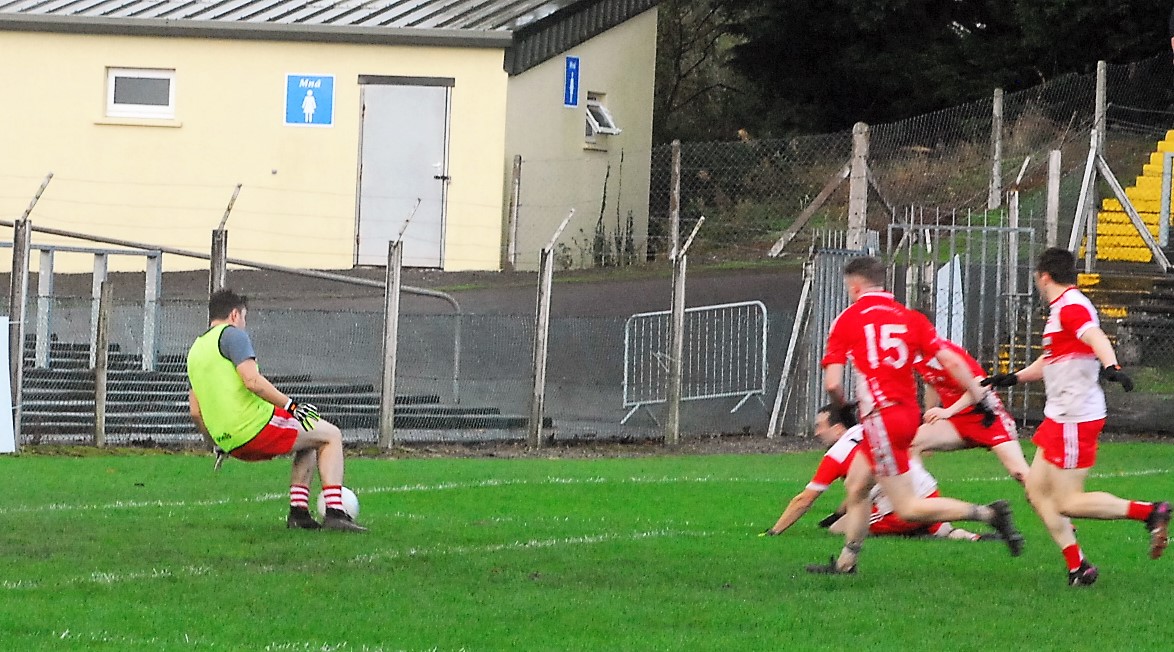 Another Ballinaglera free went wide and Dromahair made them pay for their misses when a foul on James Clancy out on the left wing was punished by a Feeney free. Even Feeney's misses were working out for Dromahair as he saw a free touch the post but it went out for a fifty off a defender and after playing a short free to James Morrison, Feeney fired over easily.

Ballinaglera hit the last point of the half from a Seamie Maguire free and they would have been quite content heading into the halftime break trailing 0-7 to 0-3 given the strong wind that was blowing straight down the field.

But it was Dromahair who came out with a bang in the second half and they almost goaled after just ten seconds when Gary Fowley got in behind the Ballinaglera defence only to see Conor O’Brien make an excellent save with his feet, James Morrison seeing his follow up effort go wide.

Enda Maguire scored an excellent long range free but after a foul on himself, Martin Feeney restored the Dromahair advantage from a free. The conditions made for poor playing conditions but the drama was superb as Caillin McLoughlin got onto the end of a high playing that broke kindly for him and chipped over.

Ballinaglera were having lots of pressure but it wasn’t paying off - McMorrow saw a shot punched out by a defender for a fifty before he delivered a free across the face of goal. A fisted effort was blocked and the loose ball brilliantly blocked by flying defenders with the follow up going wide.

Enda Maguire got his second of the half when a long delivery to Wayne Reynolds ended with the full-forward firing over from distance. McMorrow saw a free held by keeper John McGoldrick so it must have felt like a dagger in Ballinaglera's heart when a period of patient play, Jamie Conlon fired over his second of the game.

That left Dromahair five up and cruising in difficult conditions but they endured their own period of the yips when Feeney put a free wide, hit wide from play after good work from Gary Fowley and then left a free short.

Those misses looked damaging with ten minutes left when the long ball to Enda Maguire paid off. His quick pass found Wayne Reynolds charging through the middle. The diminutive forward blazed a great chance wide but had been clearly pulled back when shooting and referee Ray McBrien had no hesitation in awarding a spot kick. 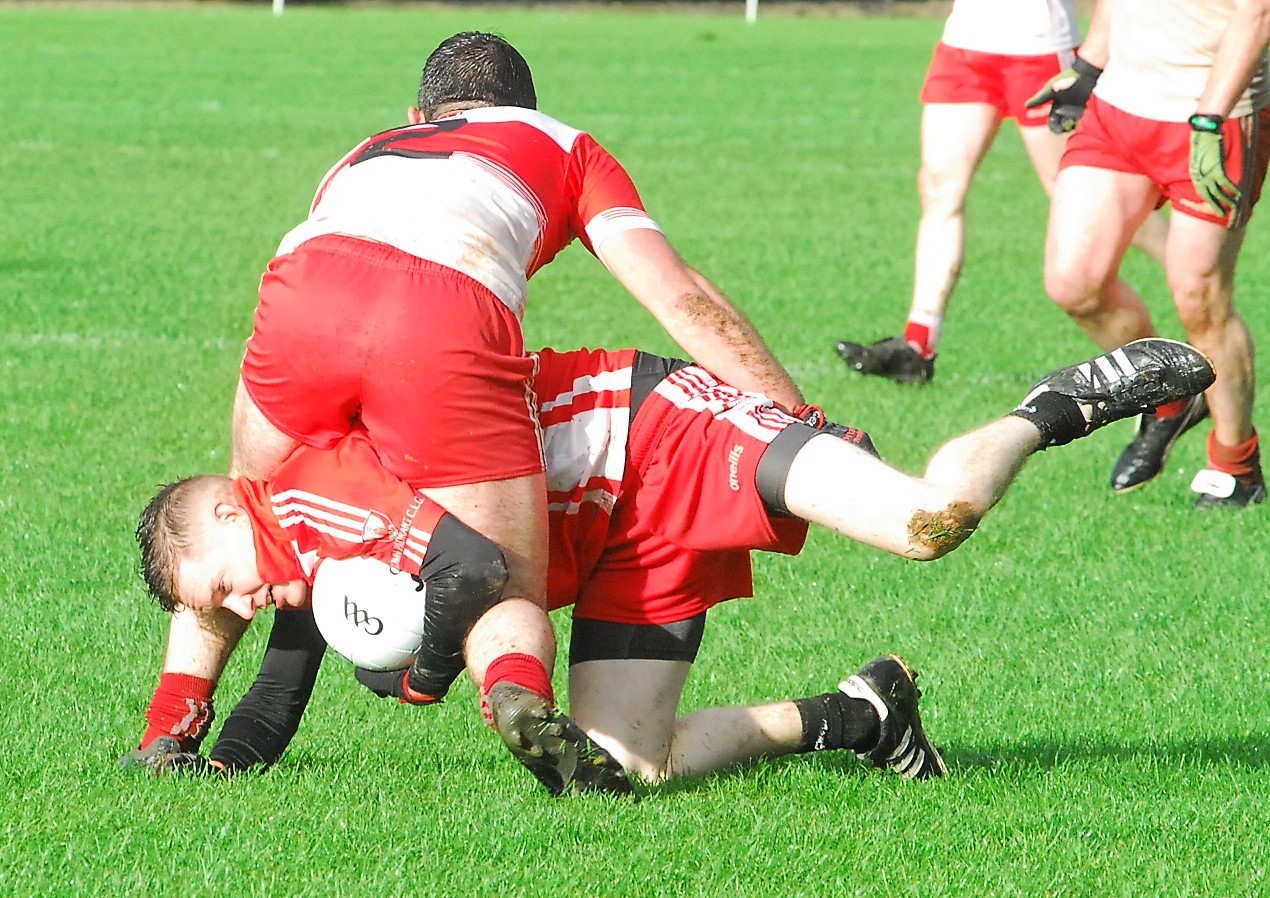 With so much pressure on, Seamie McMorrow produced his own ice-cold version of soccer’s panenka penalty - a long run up followed by a delicate tap of the ball into the bottom left corner with John McGoldrick left rooted helplessly as the ball rolled into the net.

Now the Ballinaglera crowd were in full voice and making themselves a factor in the game and they roared their approval when James Clancy saw his shot blocked before shooting wide. Ballinaglera were winning the battles around the middle of the field but Dromahair’s defence was standing tall.

Rory Kelly made a couple of superb interceptions while Shane Fowley dropped back to cut out the threat of the long ball into Enda Maguire. Ballinaglera tried might and mane to get the scores they needed but all they had to show for it was a wide from Patrick McGrail with less than two minutes to go.

There would be just one more score and it confirmed Dromahair’s victory - Padraig Clancy’s side were looking increasingly dangerous on the break and when Declan Fowley’s great run saw him find his brother Gary, the sensible option would have been to go for a point, meaning that if Ballinaglera did get a goal, all was not lost for Dromahair.

But Fowley has always been a player to go for the jugular and when he spotted Martin Feeney unmarked in front of goal, he played a precision pass across the face of the goal. Keeper Conor O’Brien, who made a superb save earlier in the game, lunged for the ball but missed and Feeney drilled the ball to the net to confirm a famous win for Dromahair. 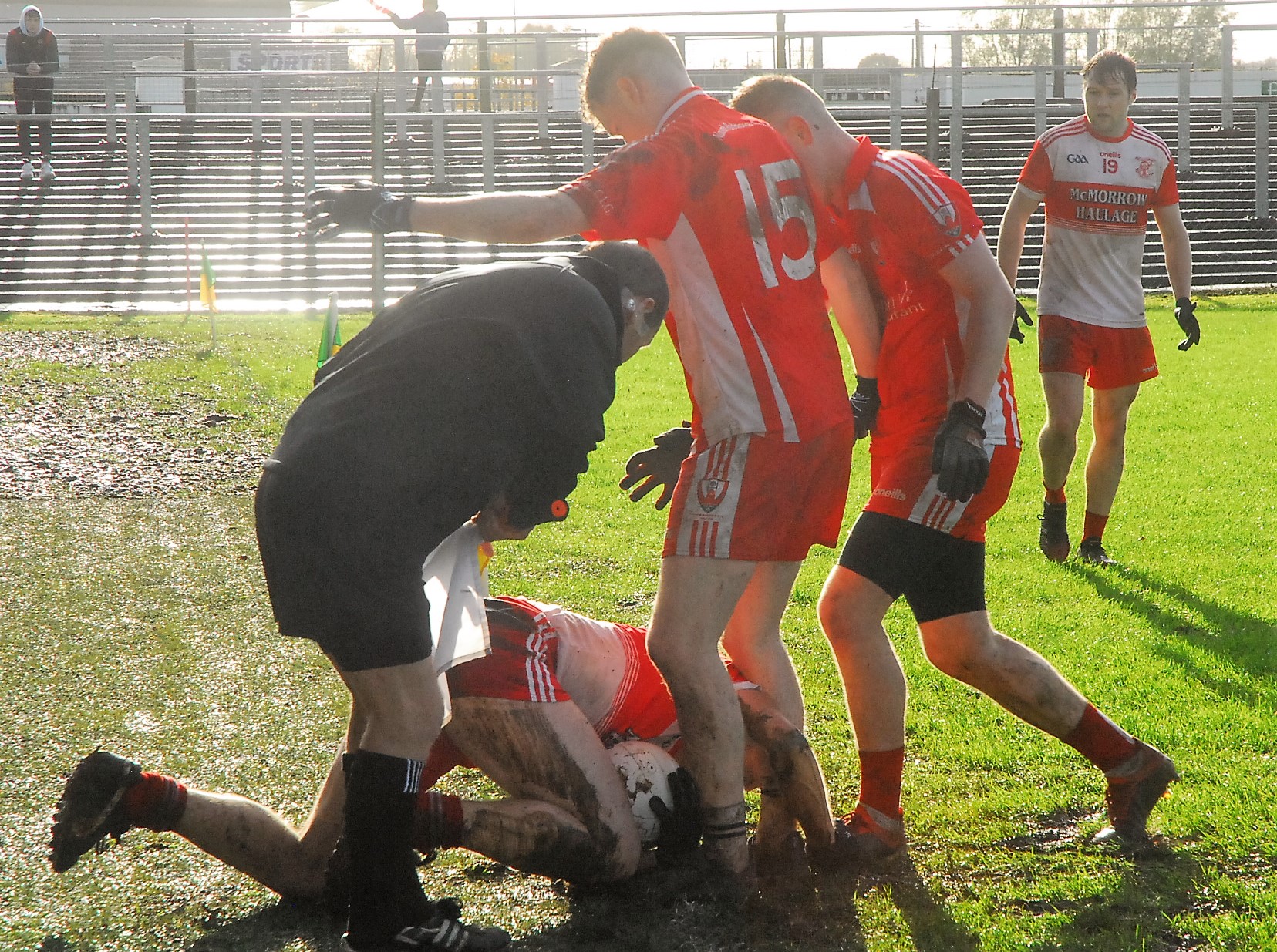