We’ve no intention of letting anyone down - Clancy 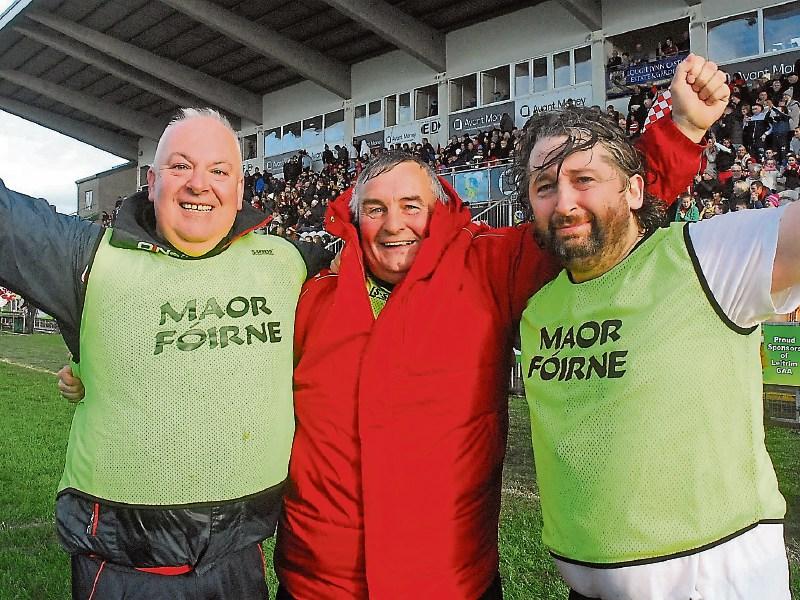 It may be mere minutes after Dromahair lifted only their second ever Intermediate title but Padraig Clancy is determined that his troops represent Leitrim to the best of their ability, a trait that served them in good stead last Sunday.

“We’ll celebrate for a couple of days but we’re back training at the end of this week,” said Padraig in reply to an inquiry about the Connacht Intermediate campaign, adding “We’re not alone representing Dromahair, we’re representing Leitrim and we’ve no intention of letting anyone down. We will go out and give it our best shot.

“We said it to the boys today, if you come out of Pairc Sean and say I could give it no more, well then everyone is proud of you, win or lose. That’s the way we approach the game; that we try our best and once they do their best and leave it on the pitch, we’re happy.”

It was pretty obvious that Dromahair had done their homework on the threats Ballinaglera posed: “We saw them playing Kiltubrid, we knew what they were about, we knew they were going to play the long ball in on top of Enda Maguire, we knew Wayne Reynolds was another out for them.

“But we worked on it at training and we decided that if we could stop those two, we would have done a lot to stop Ballinaglera. To be fair to our boys, 1-5 isn’t a big score to concede. Everyone said Ballinaglera had momentum coming into the final but we had a bit of it too.”

Dromahair even talked about coping with the passionate support Ballinaglera bring with them and it paid off after Seamie McMorrow’s 50th minute penalty: “We talked about this all week, we knew they would be a more boisterous crowd that we would be. Their first time to be in a final in 25 years - of course they are going to drive on their team.

“But we were ready for that. We told them ‘do not react to that, keep doing our own thing, keep sticking to our game plan and keep working’. We will work harder and work smarter and in the end, I think we did and we probably deserved it.”

Chatting to Padraig, you could sense how much it meant to him to get Dromahair across the line: “Thrilled is the word, absolutely thrilled. I’ve been in that losing dressing a few times, it is a horrible place to be but it is nice to be in the winning one too.”

The manager singled out his full-back line and the impact Gary Fowley had in providing the pass for Martin Feeney’s game clinching goal: “A game we were in control of up until they got the penalty and then it was a little helter skelter for the next five minutes.

“We knew that if they got another score, they would get more and more energy but they lobbed ball in on top of Enda Maguire and Rory Kelly was brilliant in that five minute spell. He came out with four or five balls and that gives your team some energy when you see your full-back tearing up the field after another move broke down.

“We went a long spell without scoring but then Gary played that ball across to Martin ... for a forward to give a ball like that! He had bigger things on his mind but Gary always does have. Straight from the throw-in at the second half, he got in on goal. Tap it over the bar. No, he went for the goal but Gary always will do that and that is why he is so dangerous and teams fear him.”

The strength of Dromahair's panel was reflected in their reaction to an early set-back: “There was only a few minutes gone when Bertie Cunningham got injured and now we hear his collarbone is broken but James Morrison came on.

“There are a few more fellas sitting in the stand who were disappointed not to get on today. We were going to bring them on and they wouldn’t weaken the team - that is what we’ve tried to build all along, it is about the group and that is what we put so much emphasis on the Junior because they drive these lads on. If you want to have a successful team, you have to have that strength in depth.”